Investors in Castlight Health (CSLT), a cloud-based software company focused on employee health, had an August to smile about. Shares moved 12% higher during the month in response to better-than-expected second-quarter results, according to data from S&P Global Market Intelligence. 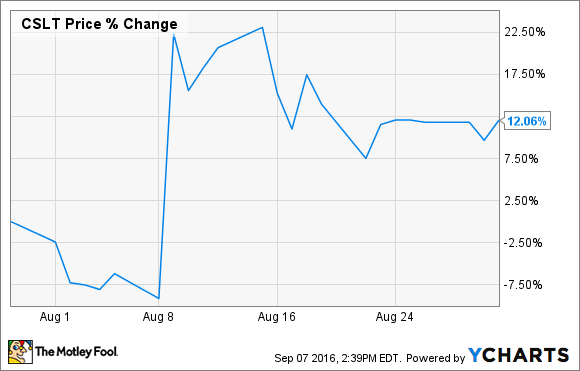 The report looked solid all around. Revenue increased by 27% to $23.6 million, which was higher than analysts were expecting. Gross margins shot up to 62.1% on a non-GAAP basis, up 800 basis points over the year-ago period. Non-GAAP net loss fell to $10.5 million, or $0.11 per share, which was much better than the $0.13 net loss that analysts had predicted.

Management credits the company's strong growth in part to its recently announced strategic collaborations with Anthem and SAP, which have given its platform a great deal of credibility. Castlight appears to have done a great job recently of leveraging that credibility into new clients. During the quarter, it signed up a handful of new giant customers that included Roche's Genetech division and Caterpillar.

With the company successfully growing its top line and signs emerging that the business is starting to scale, it's easy to see why its shares rallied in August.

Management is currently projecting that full-year revenue will land between $99 million to $102 million, which represents growth of 31% to 35%. That's consistent with the outlook provided in its first-quarter report.  On the bottom line, the company is now calling for a non-GAAP EPS loss of $0.40 to $0.42 for the year, which is a penny better than its prior outlook.

These results are certainly encouraging, but given that Castlight health is still losing millions each quarter and has been a horrific long-term investment, I'll be looking for it to string together a few more successful quarters before considering its shares a buy.