Energy Transfer Partners (NYSE: ETP) isn't off to a great start in 2016. That is evident by looking at earnings across its business segments, which in aggregate are down 2.6% resulting in a 13% decline in distributable cash flow. While several segments are down this year, one stands out as the biggest drag on results.

Drilling down into the weakest link

The chart below shows the performance of Energy Transfer Partners' segments through the first half of this year: 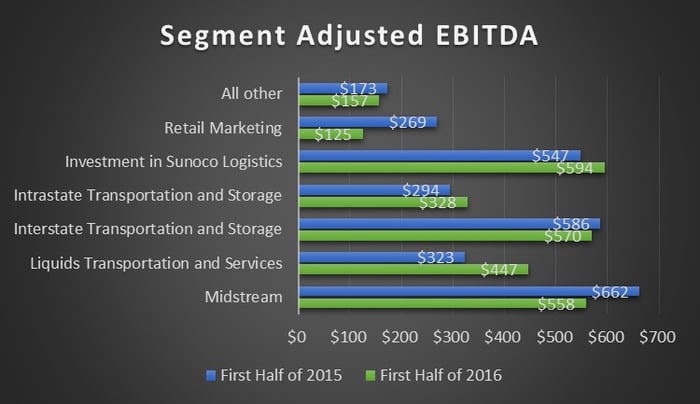 That leaves the midstream segment as the biggest weight on results after its adjusted EBITDA slumped 15.3% versus the same period of last year. While midstream volumes were higher this year, with gathered volumes up 2.1% while natural gas liquids (NGLs) produced rose 16.9%, several factors offset the positive impact of volumes. This segment's direct exposure to commodity prices was the biggest culprit, with non-fee based margins slumping due to lower commodity prices driving a $39 million decrease in earnings while losses on commodity price hedges impacted gross margin by $85 million. Meanwhile, operating expenses were up $17 million due to expansion projects and the King Ranch acquisition.

Will this segment continue to weigh on results?

While the first half was rough for the midstream segment, there are several positive catalysts on the horizon. Commodity prices are starting to improve and should lead to higher non-fee based earnings in the second half. That began to materialize in the second quarter when the Energy Transfer Partners' gross margin from non-fee based contracts and processing was up $4 million over the prior year to $64 million. That result was also much stronger than the first quarter when non-fee based contracts and processing margins were just $40 million, which represented a $29 million decline from the year-ago quarter.

The company is also working to offset its direct exposure to commodity prices by constructing additional fee-based assets. In January, Energy Transfer Partners completed the construction of the $520 million Ohio River joint venture project, which is ramping up volumes. In addition to that, Energy Transfer Partners recently completed the $270 million Orla gas processing plant in west Texas, which entered service in April. These assets should drive incremental earnings in the second half of this year.

Looking out over the longer term, Energy Transfer Partners is currently constructing the Revolution System. The $1.5 billion project includes 110 miles of gas gathering lines, a cryogenic processing plant, NGL pipelines, and a fractionation facility. While the project is not expected to be in service until the end of next year, given its large size, it has the potential to deliver substantial earnings growth once it is online. Meanwhile, due to the high demand for processing capacity in the Permian Basin, the company anticipates announcing another new gas processing plant later this year. These expansion projects have the potential turn the midstream segment into a growth engine over the long term.

Energy Transfer Partners' direct exposure to commodity prices led to a disappointing performance at its midstream segment during the first half of 2016. However, things are starting to look up for the segment. Not only are commodity prices improving, but the company had several fee-based expansion projects enter service earlier this year. These catalysts, when combined with future growth projects in the pipeline, should turn this segment from a disappointment to a bright spot.