Microprocessor giant Intel (NASDAQ:INTC) has long been known for its chip-manufacturing prowess relative to competitors. Its manufacturing technologies have often offered better performance than the competition, and it has usually been able to bring denser technologies -- that is, technologies that allow chip designers to pack more functionality into a given area -- to the market sooner than its competitors.

However, in recent years, Intel's chip manufacturing peers Taiwan Semiconductor Manufacturing Company (NYSE:TSM) and Samsung (NASDAQOTH: SSNLF) have been working to try to narrow the gap.

During the next couple of years, Intel is certainly going to face something of a public relations/perception nightmare as its chip-manufacturing peers transition to technologies that they refer to as "7-nanometer" -- usually smaller is better -- around the time when Intel will be in production on a technology that it calls "10-nanometer." Although there's more to a chip-manufacturing technology than density, it's a relevant metric that has a direct impact on the capabilities that these companies can, cost-effectively, put into their chip designs.

A question that's worth pondering, then, is the following: Will Intel be able to maintain chip-area leadership with its 10-nanometer technology even as competitors transition to their "7-nanometer" technologies? I think the answer to that is "yes." Here's why.

I consider TSMC to be Intel's fiercest and most capable competitor. It's the world's most successful contract chip manufacturer, and over the last several generations, it has executed brilliantly in ramping new manufacturing technologies into production in support of Apple's (NASDAQ:AAPL) A-series processors.

In contrast, Samsung has lost Apple's business, and is even reportedly actively shifting focus away from contract chip manufacturing in favor of display manufacturing. In light of this, I think the most interesting discussion is one in which we look at Intel's and TSMC's public statements head-to-head.

A metric that Intel uses (publicly) to compare the relative densities of two manufacturing technologies is gate pitch multiplied by cell height. (A visual representation can be found below.)

Intel says that, using this metric, its 10-nanometer technology offers "close to a full generation lead in logic density," as illustrated in the slide below: 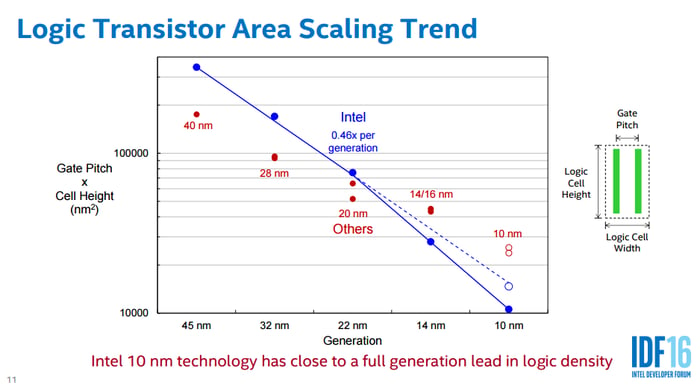 In the table below, I show the gate pitch multiplied by minimum metal pitch -- a similar metric that Intel and others have used in the past in place of gate pitch multiplied by cell height -- for several Intel and TSMC technologies, as well as my projections. This is based on Intel's and TSMC's public statements for what future technologies will bring:

Intel should have a slight area lead

The reality is that, in terms of chip area scaling, Intel is likely to have a roughly six-month lead over TSMC. This, in the scheme of how long these technologies are expected to remain leading edge, is just not all that long.

The good news for Intel is that, contrary to the marketing labels that TSMC (and other contract chip manufacturers) assign to their technologies, it won't actually fall behind its competition in terms of chip area scaling. The days of Intel having a substantial leadership position in this metric, though, are likely long gone.