If you want to have the best retirement possible, it's important to take steps to prepare for the things that could affect you the most. Here's a closer look at five retirement facts that could have a huge impact on your retirement plans, and there's a good chance you may not even know about them.

Whether you're a few years or still a few decades from retirement, these five facts are important. Let's take a closer look at how they could affect you.

1. You'll probably need long-term care (and have to pay for it) 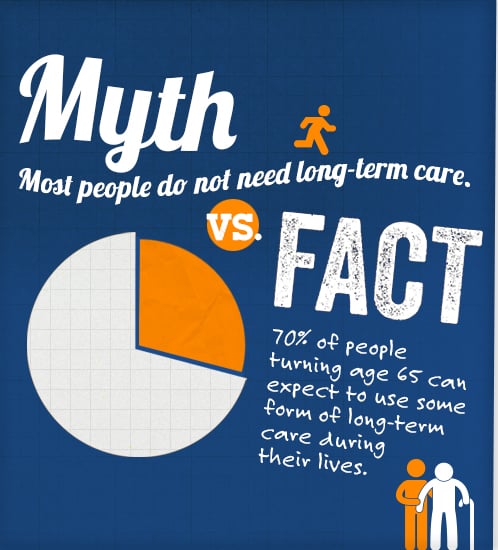 And since long-term care is not always covered by health insurance or Medicare, retirees need to have a plan to provide for it. Here is how the majority of non-medical long-term care -- what Medicare doesn't pay for -- is provided for:

In other words, anyone born after 1954 will either have to delay retiring a little longer to get their full benefit, or elect to get a smaller check each month if they retire at 66 or sooner. If you're planning to retire anytime between now and 2027, it's a good idea to make sure you know when your Full Retirement Age is, since the amount of your monthly benefit is predicated on that number.

3. Average retirement savings will generate less than $500 per month

According to Vanguard, which manages millions of retirement savings accounts, the median balance in defined contribution plans (think 401(k) plans) it manages for people 55 and over was less than $72,000 in 2015. For context, that would only generate about $240 per month in retirement income. This only covers a small selection of total retirement savings, but even as a small sample size it's concerning.

The numbers below explain why many retirees end up back at work. Image source: Getty Images.

The U.S. Government Accountability Office offers up a bigger picture look, but it's still concerning. According to the GAO, the median age 55-64 household has $104,000 in retirement savings, while the median age 65-74 household has $148,000 saved. Sure, that's a lot more than Vanguard's data, but in terms of dependable retirement income, it's only worth $347 to $493 per month in retirement income. Paired with an average Social Security benefit of less than $1,500 per month, that's not a lot of money to live on in retirement.

For millions of older Americans, there's an even bigger concern. The GAO found that 29% of households age 55 and over don't have any defined benefit (such as a pension) or retirement savings at all.

Whether it's Social Security, distributions from a 401(k) or IRA, or a pension you'll almost certainly pay federal income tax. Since these kinds of retirement income sources are generally considered regular income, you'll pay federal income tax on your total earnings based on your adjusted gross income (after deductions) at your marginal tax rate.

There are some exceptions to this, including distributions from a Roth IRA or Roth 401(k), which are not taxed, but by and large, retirement doesn't mean the end of federal income tax.

However, many states don't have income taxes at all, while others give income tax breaks to retirees. Since the laws vary from state to state, it's good to learn about income tax in your state (or the state you plan to retire to). Furthermore, if a state doesn't have an income tax, it's important to understand how it makes up that revenue, whether in higher sales tax, property tax, or some other way, and how that could impact you in retirement.

5. Homeownership rates in retirement are trending down (but mortgage debt is increasing)

Over the past decade, the percentage of older Americans who own their home has fallen. According to a Harvard University study in 2014, the percentage of Americans aged 50-79 who owned a home fell between 2005 and 2013. The biggest percentage decline was in the younger group, with those 50-64 owning home falling from over 80% in 2005 to below 76% in 2013.

At the same time, more homeowners are carrying mortgages later in life. According to the same Harvard study, the percentage of homeowners 65 and over with a mortgage doubled from below 20% to 40% from 1992 to 2010, while the 50-64 age group saw the rate increase from more than 60% to more than 70% over the same period.

The rising number of retirees who don't own a home will likely face higher housing costs over time compared to homeowners. At the same time, older homeowners still paying a mortgage may be forced to delay retirement longer than expected to cover their expenses. For both groups, the burden of expensive housing costs leads to less spending on food, healthcare, and other areas that are important to higher quality of life for retirees.

Furthermore, home equity often provides a critical safety net for many older retirees, and can be tapped to pay for care later in life. Carrying a mortgage into retirement diminishes this shield, while not owning a home eliminates it entirely.