Billionaire Warren Buffett is perhaps the most closely watched investor in the world, and the stock portfolio of Berkshire Hathaway (NYSE:BRK.A) (NYSE:BRK.B), the company he runs, is a popular source of investment ideas. Of the 45-or-so stocks in Berkshire's portfolio, here are three that could make excellent long-term investments right now.

Wells Fargo (NYSE:WFC) was on my "Buffett stocks" list last month, but since the share price has pulled back even more, it's still an excellent buy.

At this point, everyone has heard about Wells Fargo's "fake accounts" scandal. To be clear, the bank did a bad thing. Trust is everything in the banking business, and Wells Fargo has some work to do if it wants to restore the public's trust. And to be completely fair, I may feel differently about the company if an unauthorized credit card or checking account was opened in my name.

It's been a little more than a month since news of the scandal broke, and Wells Fargo's stock is down by about 10%, currently sitting just over its 52-week low. To me, this discount seems more than reasonable, given that the bank's operations are still rock-solid for the most part. Wells Fargo's efficiency and risk-management is still best-in-breed, and this is why the bank consistently generates the best profitability figures out of the "big four" banks. 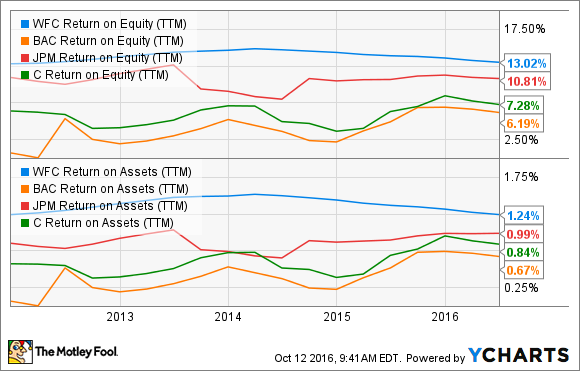 Additionally, even with the retirement of CEO John Stumpf, the impact of the scandal is likely to be less than many experts predict, as I recently wrote. The phony accounts were unlikely to have generated any significant profits for the bank, and as my colleague John Maxfield explained shortly after the scandal was made public, it's unlikely that many customers will end their banking relationships with Wells Fargo over this.

With a shockingly low valuation of just 4.1 times TTM earnings, General Motors (NYSE:GM) is simply too cheap to ignore. To be clear, this is not the old General Motors. The company has a solid balance sheet with more cash than debt, and it has done a good job of getting its pension liabilities under control.

The reason for the low valuation? In a nutshell, U.S. demand for GM vehicles is expected to peak in 2016 and then begin to drop, causing profitability to take a massive hit. While this is likely to happen, GM has done a good job of controlling costs and producing new models (like the well-received Malibu) that are more profitable than those they replace, which should help reduce the impact on the bottom line. Plus, with the upcoming launch of the Bolt electric car, GM's ability to innovate could give it an edge over peers as overall vehicle demand softens over the coming years.

General Motors has been aggressively buying back shares, most likely to take advantage of the rock-bottom valuation. You can as well, and I wouldn't be surprised if Buffett added to his GM position as Berkshire's stockpile of cash continues to build.

Despite all of the issues, there are still some compelling reasons to buy AmEx. The company has several key competitive advantages that should allow it to rebound nicely. For one thing, AmEx has an incredibly strong brand that has become synonymous with high-end credit card products. In fact, in its 2016 rankings, Interbrand gave American Express the top spot in the financial industry, with a brand worth approximately $18.4 billion all by itself, more than UPS, Ford, Budweiser, and eBay, just to name a few. Another major advantage is its massive closed-loop payment network which allows it to profit from both sides of payment transactions (merchant and consumer).

Over the past year or so, American Express has been aggressively adding new revenue streams in an effort to replace the lost Costco income. For example, the company has established new partnerships with Sam's Club, Uber, and Airbnb, and has a renewed emphasis on increasing the number of merchants that accept the company's cards. If you're an AmEx cardholder, you've probably heard "Sorry, we don't accept American Express" at least once or twice. This has been one of the company's biggest weaknesses, and one that may soon be a thing of the past. AmEx's most recent earnings were promising, and if the improvements continue, the stock may not be cheap for much longer.

It can be tough to decide, and the right answer depends on your particular risk tolerance and investment goals. In a nutshell, all three have some level of risk at this point, but that's also why they're such compelling bargains. As long as you're buying for the long term, you won't go wrong with any of them. In fact, I already own two of them in my own portfolio, and I'm strongly considering adding the third.