For more than a year Energy Transfer Equity (NYSE:ET) wanted nothing more than to buy control of Williams Companies (NYSE:WMB) to bolster its energy infrastructure empire. However, the deepening of the energy market downturn, combined with leverage concerns and tax issues, changed its mind. That debacle caused a significant slump in the value of both companies, which is enticing many investors to consider adding one of them to their portfolio. That said, while both companies have their merits, one stands as the better choice right now for long-term investors.

As mentioned, one of the reasons the merger between Energy Transfer Equity and Williams Companies fell apart had to do with their weak balance sheets (both companies are currently rated non-investment grade by the major rating agencies). Their combined credit was poised to get even worse because Energy Transfer would have needed to issue $6 billion of incremental debt to fund the cash component of the proposed deal. That debt could have proven to be an insurmountable challenge given that the weakening oil and credit markets forced Energy Transfer to slash the estimated deal synergies from $2 billion all the way down to a mere $100 million.

Needless to say, neither company has a strong balance sheet at the moment. Furthermore, neither is expected to get much better in the near term because both are currently supporting the growth of their master limited partnerships (MLPs). Williams is reinvesting $1.7 billion into Williams Partners (NYSE: WPZ) so that the MLP can fund a significant growth phase while maintaining its investment-grade ratings. Meanwhile, Energy Transfer agreed to reduce its incentive distribution rights over the next couple of years to provide nearly $1.2 billion of support to its MLP Energy Transfer Partners (NYSE: ETP) so that it can also maintain its investment-grade credit while funding a massive project slate.

Bottom line, this battle ends in a draw.

Energy Transfer Equity, on the other hand, owns a much more diversified set of assets via its three publicly traded MLPs: 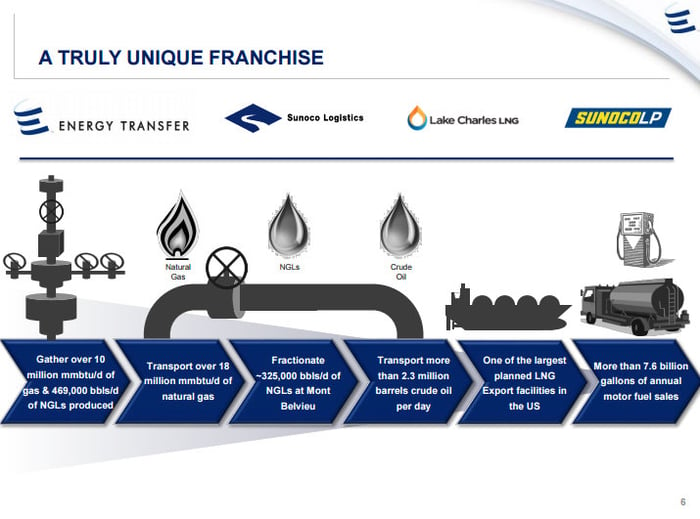 That said, Energy Transfer receives the bulk of its income from its namesake MLP, Energy Transfer Partners, which, like Williams Partners, is primarily a natural gas pipeline and processing company. Still, the added diversification it gets by owning a stake in oil pipeline MLP Sunoco Logistics Partners (NYSE: SXL) and retail marketing MLP Sunoco LP (NYSE:SUN) is important because it diversifies the company's cash flows and provides Energy Transfer with opportunities to drive future growth that Williams does not possess.

That diversification gives Energy Transfer the stronger asset base.

Williams Companies is currently supporting Williams Partners with a $5 billion investment through the end of next year on expansion projects, primarily on its Transco interstate natural gas pipeline system. For perspective, that would grow its asset base by about 10%. Moreover, the company sees those Transco expansions alone driving more than $1 billion of incremental modified EBITDA by 2018, which is healthy growth for a company that has generated an average of $4.2 billion in adjusted EBITDA over the past two years.

Energy Transfer Equity, likewise, is supporting the major growth phases of Energy Transfer Partners and Sunoco Logistics Partners. In Energy Transfer Partners' case, it is currently constructing $10 billion in capital projects, which represents 15% growth in its asset base. Meanwhile, the company expects those projects to deliver, when complete, an EBITDA multiple of six to eight, or roughly $700 million in annual EBITDA at the midpoint. In addition, Sunoco Logistics has several expansion projects currently under development, with plans to spend $1.4 billion this year alone on growth capital expenditures. In addition, it recently spent $760 million on an acquisition in the Permian Basin, which has substantial expansion opportunities. Finally, Energy Transfer Equity has a major expansion project of its own, a proposed liquefied natural gas (LNG) export facility along the Gulf Coast. That project could lead it and Energy Transfer Partners to invest a combined $10.9 billion in the years ahead.

Both Williams and Energy Transfer have visible near-term growth pipelines. However, Energy Transfer's growth is diversified well beyond one major asset and could extend out for years if the company moves forward with its LNG export project. This visible backlog gives it more upside potential over the long term.

While neither company has a great balance sheet and both boast strong upside via visible growth projects, there is one thing that really sets Energy Transfer Equity apart: diversification. Not only does the company currently control a more diversified energy infrastructure franchise, but it is pursuing multiple expansion projects to diversify its income streams further and grow its scale. That diversity, in my opinion, makes it the better buy for investors choosing between the two.