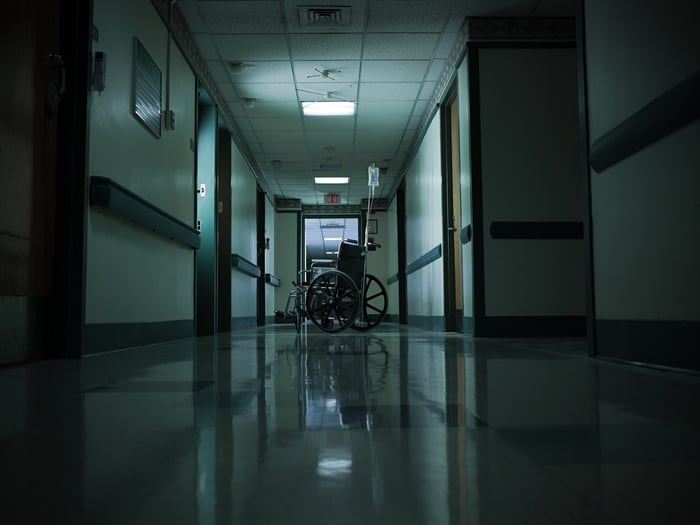 A preliminary earnings update from Community Health Systems (NYSE:CYH) on Wednesday evening was chock-full of disappointing news for investors, which caused the stock to crater over 40% by noon EDT Thursday.

The company, which operates 158 hospitals in 22 states, saw 12.4% fewer admissions in the most recent third quarter compared to the year-ago period. Meanwhile, Community Health Systems is facing increased pressure on pricing as more individuals switch to managed-care plans, which are accompanied by reduced cost burdens for ratepayers. The circumstances have accelerated the writedown of certain assets and, as reported in September, will see four hospitals sold from the company's portfolio.

Here are the financial results investors should know:

That's a rough table for investors to look at, but there is a lone bright spot: cash flow from operations. For the first nine months of 2016, cash provided from operating activities will total approximately $810, compared to $615 million in the same period last year. While an efficiently run business is a positive, the cash will most certainly be needed to combat headwinds in the current environment -- rather than being used toward management's stated goal of driving down the company's debt levels.

The healthcare system has undergone structural changes in the last decade that have made it challenging for all of the ecosystem's moving parts to adapt. That has hit some companies, specifically those with broad operations across many states, especially hard. While it may be impossible to predict how the healthcare system will change in the next decade, one thing is certain: Shareholders won't find much to like about the company's third-quarter earnings report on Nov. 2.