Please ensure Javascript is enabled for purposes of website accessibility
Log In Help Join The Motley Fool
Free Article Join Over 1 Million Premium Members And Get More In-Depth Stock Guidance and Research
By Nicholas Rossolillo – Nov 2, 2016 at 7:43AM

Iridium Communications (IRDM 1.91%) shares are down 4% over the past year, but it's historically been a volatile stock and the company is hoping new satellites will drive revenue up in the years to come. 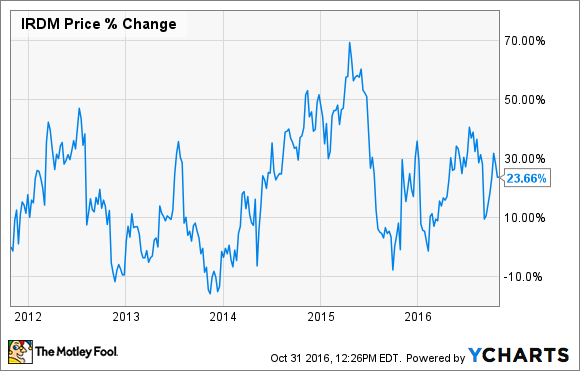 In the quarter ended June 30, Iridium reported its best-ever subscriber growth, led by machine-to-machine and government communications service increases. Total subscribers were at 823,000, up from 788,000 at the end of the previous quarter. As a result, total revenue increased 7.1% over the same period the previous year.

The company announced that in the 12 months ending June 30, it had shipped more than 2,200 new Iridium Pilot units, "concluding with one of the best quarters in company history." The devices provide broadband service for the maritime industry and will be compatible with Iridium's next-generation satellite communications network that is currently being deployed.

While equipment sales are expected to be flat for the full calendar year 2016, the sales help feed into the company's recurring service income, which makes up three-quarters of total revenue. Service revenue is expected to increase 5% to 6% for 2016.

The third quarter, reported last week, showed the top and bottom lines growing once again as commercial and government subscriber revenue grew 3% and 22%, respectively. The company also upped the bottom end of full-year guidance given the good quarter, predicting operational EBITDA of $250 million to $255 million. However, the company reported it will see some delays in new satellite deployment into 2018.

The advantage of satellites

Iridium's low-orbit satellite array allows it to boast of having the only global communications network with worldwide service. This puts the company in a unique position to help businesses and government entities that require a network that spans the whole globe.

The company is in the midst of upgrading its current satellites to a next-generation system it is calling Iridium NEXT. Many of the devices being sold now will be compatible with the new network, which is now expected to be complete by 2018. The company expects 2019 will be the first full year of operation for its next generation of satellites. The previous expectation was completion would come by the end of 2017, but an explosion that destroyed a SpaceX rocket on Sept. 1 has pushed the timeline back. Iridium plans to use SpaceX to launch its satellites.

"We were encouraged by SpaceX's public comment that the Falcon 9 rocket should be back to flight later this year," Iridium CEO Matt Desch said in the recent earnings release. "Today, ten Iridium NEXT satellites are at Vandenberg Air Force Base and ready for first launch. Iridium is scheduled to be SpaceX's first commercial flight from Vandenberg Air Force Base following the completion of its investigation into the cause of the September launch pad incident."

The new satellite system will continue to be able to provide network coverage to 100% of the Earth's surface, including land, sea, and air. This will help Iridium keep a leg up on any competition as the leading voice and data provider for the maritime and aviation industries, as well as a leading provider for governments and global enterprises.

Apart from enabling more bandwidth and higher speeds for customers, Iridium's new satellite array will also help drive the Internet of Things for global businesses, something the company refers to as machine-to-machine services. The network will increase the reliability and reach of things such as tracking for airplanes, ships, and commercial trucks; businesses will be able to monitor the status of assets that are in transit; and there will be a continued ability to allow for hosted payloads, the ability for an agency or business to "piggyback" their device on one of Iridium's satellites.

The long-term prospects for NEXT have kept investors optimistic, even though short-term pessimism temporarily drove prices down after the previous quarter showed higher-than-expected operating expenses.

Iridium's management is excited about the full deployment of the NEXT network. Through the end of the 2016 fiscal year, the company sees top-line growth being modest. Over the long term, though, expectations soar.

As the new capabilities come online, Iridium sees service revenue ballooning to $440 million to $465 million for 2019. That's as much as a 47% increases over 2015's service revenue of $317 million. Until the service is available and as long as expenses stay high, Iridium shares are likely to continue with gut-wrenching ups-and-downs. If the company's optimism isn't misplaced, though, this stock is set to head higher in the years to come.

Nicholas Rossolillo has no position in any stocks mentioned. The Motley Fool recommends Iridium Communications. Try any of our Foolish newsletter services free for 30 days. We Fools may not all hold the same opinions, but we all believe that considering a diverse range of insights makes us better investors. The Motley Fool has a disclosure policy.