Donald Trump wins! What does this unexpected turn of events mean for pharmaceutical stocks?

Pharma stocks, so far, are reacting positively to the news the Donald Trump has upended Hillary Clinton to become the 45th President of the United States of America. However, a Donald Trump presidency may, in fact, be a black swan for this multi-billion industry. Here are 3 reasons why.

Reason No. 1: The Trans-Pacific Partnership would be beneficial to American pharma giants

Donald Trump is a champion of the bold idea of withdrawing from the Trans-Pacific Partnership (TPP). While this dramatic shift in trade policy may sound pro-American, it would unquestionably cause serious damage to the growth prospects of big pharma companies like Pfizer (PFE 0.49%) and Gilead Sciences (GILD -0.23%) that are based inside the United States.

The heart of the matter is that the TPP was set up in part to help U.S. drugmakers improve their profit margins abroad by increasing the patent life of top-selling medications and making drug prices more uniform across the globe. Although the evergreening of patents and modestly higher drug prices worldwide are two issues that have drawn the ire of global healthcare advocates, these core tenets of the TPP are without a doubt a huge benefit for U.S. pharmaceutical companies.

A Trump presidency is almost certainly going to drive the U.S. dollar upwards against major world currencies, whereby negatively impacting foreign exchange rates. After all, a key part of his trade platform centered around new tariffs, renegotiating long-standing trade deals like NAFTA, and an attempt to label China a currency manipulator. The point is that capital is probably going to get sucked out of top emerging markets like China, driving unfavorable exchange rates for U.S. pharma companies moving forward.

How does this issue directly impact pharma companies? One of the few bright spots in Pfizer's Q3 earnings report was the company's continued strength in emerging markets. The drugmaker's Essential Health revenues, for instance, rose by 9% year over year in the third-quarter in emerging markets.

Turning to Gilead, this blue-chip biotech derives around 7% of its total antiviral sales from global markets outside of Europe and Japan. That number could grow substantially if foreign exchange rates remained stable and the TPP was ratified. However, that rosy growth scenario now appears to be off the table.

The big picture issue is that a rising dollar stemming from isolationist trade policies is going to be detrimental to the profit margins of U.S. pharma companies.

Reason No. 3: Obamacare is now in jeopardy

With the Republicans taking control of both houses of Congress, Trump now has the political firepower -- and arguably, the mandate -- to dismantle the Affordable Care Act, or Obamacare. Whether you agreed with Obamacare or not, this crown jewel of Obama's presidency coincided with an unprecedented rally among biopharmaceutical stocks as a whole, shown by the 200% rise in the iShares Nasdaq Biotechnology ETF (IBB -0.32%): 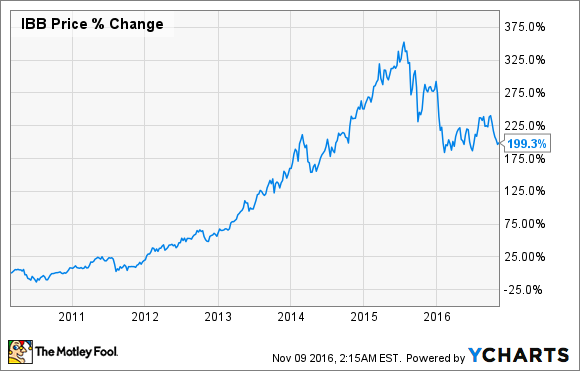 To put this dramatic rise into context, the iShares Nasdaq Biotechnology ETF was actually down by more than 6% since its inception until the ACA become law on March 23, 2010: 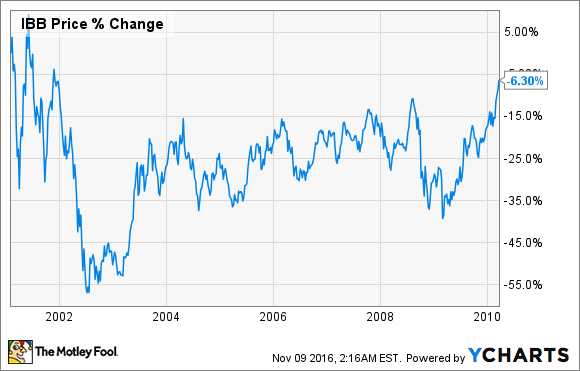 A Donald Trump presidency, along with a Republican Congress, may spell disaster for U.S. pharmaceutical companies that have benefited from favorable exchanges rates and from wider insurance coverage that was part and parcel of Obamacare over the last six years. Say what you want about Obama, but there's no doubt that the pharmaceutical industry flourished under his administration, thanks in no small part to Obamacare.

To be fair, a Trump administration may attempt to deal with the outstanding tax issues that drove companies like Pfizer to seek asylum abroad of late. Even so, these tax headaches are minor issues compared to the potential headwinds that could be stirred up by nixing the TPP and a strong dollar. That's why I plan to remain cautious with this industry for the time being -- that is, until Trump's actual policies take shape.

George Budwell owns shares of iShares NASDAQ Biotechnology Index and Pfizer. The Motley Fool owns shares of and recommends Gilead Sciences. Try any of our Foolish newsletter services free for 30 days. We Fools may not all hold the same opinions, but we all believe that considering a diverse range of insights makes us better investors. The Motley Fool has a disclosure policy.