Americans are driving more than ever these days. The Department of Transportation's Federal Highway Administration reported that Americans drove 3.15 trillion miles in 2015 -- a 3.5% uptick from 2014 and enough to cover 337 round trips from Earth to Pluto. That total also topped the previous annual record of about 3 trillion miles driven in 2007. 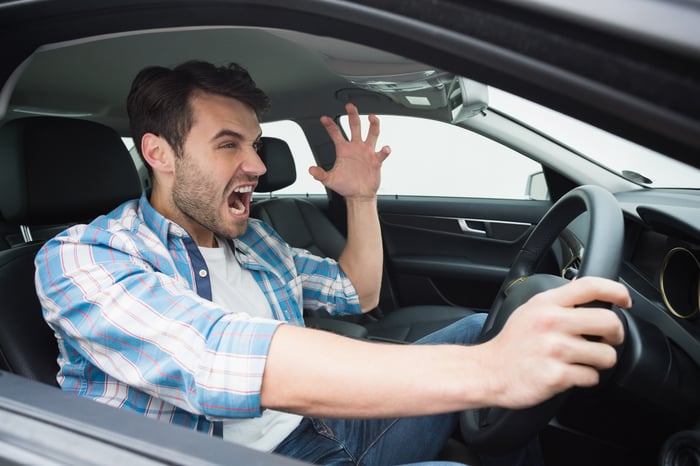 However, Americans aren't eager to hand over their steering wheels to driverless cars just yet. A recent Kelley Blue Book survey found that 64% of U.S. drivers preferred maintaining full control over their cars, even though 63% believed that public roads would be safer if everyone drove autonomous vehicles.

Despite that reluctance to let the robots do the driving, many tech and auto companies believe that driverless cars will hit the market within the next five to ten years. That "forced" evolution might make some drivers unhappy, but it seems to be the inevitable future of the auto market. Let's take a closer look at this fledgling market, and which companies could benefit the most from this technological shift.

Many major automakers -- like Audi, BMW, and Ford -- are all investing heavily in the development of autonomous vehicles. While these automakers should enjoy a moderate sales boost from autonomous upgrades over the next few decades, a more direct way to profit is to invest in the suppliers of the next-gen hardware which powers driverless cars. Top choices in that market include Delphi Automotive (NYSE:DLPH), Mobileye (NYSE:MBLY), Nvidia (NASDAQ:NVDA), and Qualcomm (NASDAQ:QCOM).

Delphi, one of the biggest auto parts makers in the world, sells ADAS (advanced driver assistance systems) and other autonomous solutions through its Electronics and Safety business. Revenue from that business rose 14% annually last quarter and accounted for nearly a fifth of its top line. Mobileye, another maker of ADAS solutions, recently partnered with Delphi to launch a fully autonomous vehicle system by 2019. Mobileye works with about 90% of the world's leading automakers, and it's developing next-gen computer vision chips which can help autonomous vehicles "see" and react to obstacles on the road.

Nvidia, which is primarily known for its gaming GPUs, gained a major foothold in the connected cars market with Tegra, a mobile CPU that was originally designed for smartphones and tablets. Tegra chips now power the infotainment and navigation systems of many high-end vehicles, and Nvidia is trying to leverage that presence to sell a "turnkey" autonomous driving computer, Drive PX, to major automakers.

While those hardware makers are duking it out over the driverless supply chain, software players like BlackBerry (NYSE:BB), Alphabet's Google, and Apple are carving up the software market.

BlackBerry, which is best known for its nearly extinct smartphones, also owns QNX, the largest embedded OS for cars in the world. The OS isn't identified by a single GUI (graphic user interface) like Windows. Instead, automakers and other software players build their own infotainment and navigation systems on top of QNX, which links those platforms to the vehicles' hardware.

For example, Google and Apple are currently trying to extend their mobile ecosystems into cars with Android Auto and Apple CarPlay. These platforms "mirror" their smartphone features to the dashboard, which runs on QNX. In the future, apps for driverless cars will likely access Google Maps, Apple Maps, or other navigation systems to ferry passengers between destinations.

But diehard drivers shouldn't worry yet...

The tech and auto industries seem to be forcing a technological shift toward driverless vehicles, but Moody's predicts that the "near-universal" adoption of driverless cars probably won't happen until 2055.

That's because initial price tags will be high and driverless vehicles still aren't legalized in most states. Accidents involving driverless cars will also probably continue occurring as long as manually controlled vehicles remain on the road, while privacy and security issues could prevent drivers from letting go of the steering wheels. But despite those headwinds, tech and auto investors should still have some exposure to this growing market in their long-term portfolios.