Many investors might be wary of buying high-flying tech stocks that outpaced the NASDAQ's 5% growth over the past 12 months. However, several big tech stocks still trade at discounts to their industry peers despite posting double-digit gains over the past year. Let's take a closer look at three such stocks, and why they might still have room to run. 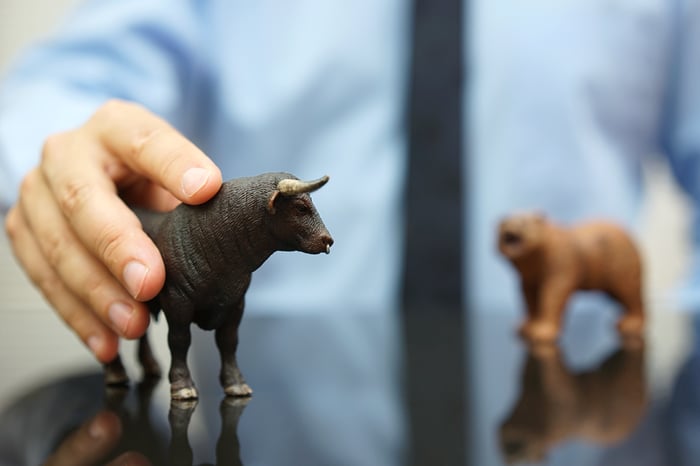 Analysts expect Applied Materials' revenue to rise 17% this year, compared to 12% growth in fiscal 2016. Non-GAAP earnings are expected to rise 34% this yearand to 47% growth last year. That makes its current P/E of 21 -- which is lower than the industry average of 26 for semiconductor equipment companies -- still look cheap after its 70% rally over the past 12 months.

Applied Materials almost merged with Tokyo Electron last year, but the plan was scrapped due to antitrust issues. However, the company could still swallow up some smaller supply chain players to widen its moat against potential rivals.

One of Applied Materials' biggest customers is Taiwan Semiconductor Manufacturing (NYSE:TSM), the largest pure-play semiconductor foundry in the world. Only three foundries -- Intel, Samsung, and GlobalFoundries -- have comparable chipmaking facilities. "Fabless" chipmakers, which don't manufacture their own chips, usually rely on one of those four companies to manufacture their chips.

Shares of TSMC rallied more than 30% over the past 12 months on rising semiconductor demand and strong sales of iPhones. Earlier this year, analysts cited by the Taipei Times estimated that orders from Apple (NASDAQ:AAPL) accounted for around 10% of TSMC's revenue last year. That percentage likely increased this year as TSMC became the exclusive supplier of Apple's A10 chips, instead of splitting Apple's orders with Samsung.

That's why TSMC's revenue and earnings respectively surged 22% and 28% annually last quarter. Analysts expect its revenue to improve another 14% this year, and for earnings to grow by 9%. Those estimates would likely be higher if Qualcomm (NASDAQ:QCOM) hadn't reportedly inked an exclusive deal with Samsung's foundry for the production of its Snapdragon 830 processors. Nonetheless, TSMC's P/E of 16, which is lower than the industry average of 22 for semiconductor/IC makers, makes it a fairly cheap play at current prices.

Qualcomm, the biggest mobile chipmaker in the world, is expected to post just 1% sales growth and 7% earnings growth this year. Its chipmaking business, which generates most of its revenue, remains under pressure from cheaper rivals like MediaTek and first-party ARM chips from Apple, Samsung, and Huawei. Its patent licensing business, which generates most of its profits, faces pressure from defiant OEMs and regulators which claim that its cut (up to 5% of the wholesale price of a device) is too high.

However, the bulls believe that Qualcomm's "best in breed" SoCs will remain the preferred chipsets for premium flagship devices, and that new licensing agreements (especially with Chinese OEMs) will keep its licensees in check. Qualcomm is also expanding into chipsets for adjacent markets like Internet of Things (IoT) gadgets, wearables, home automation devices, drones, and connected cars.

These new chipsets could diversify its top line away from mobile devices. To accelerate that expansion, Qualcomm acquired IoT/automotive chipmaker CSR last year, and agreed to buy automotive chipmaker NXP Semiconductors earlier this year. If you believe in Qualcomm's expansion and recovery plans, its current P/E of 18 -- which is lower than the industry average of 22 for broad line semiconductor companies -- looks cheap relative to its long-term growth potential.

Applied Materials, TSMC, and Qualcomm all rode high on the recovery of the semiconductor market over the past year. All three stocks still look cheap relative to their industry peers, but investors should realize that an unexpected slowdown in chip demand could also cause their rallies to peter out. If you have a bullish outlook on the semiconductor market, these three stocks could be great investments. But if you don't, you should probably check out cheap stocks in other industries instead.