Shares of nearly every oil-related company are surging today on news that OPEC is moving very close to a formal agreement to cut production. Offshore drillers have joined the party in a big way, with Ensco Plc (OTC:VAL), Rowan Companies Plc (NYSE:RDC), and Transocean Ltd. (NYSE:RIG) shares all up nearly 15% or more at 1:38 p.m. EST: 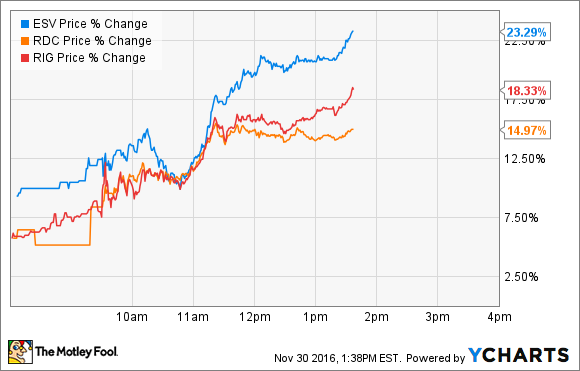 Oil prices have rallied huge on this news, with Brent futures jumping more than 8% and climbing back over $50 per barrel. And considering that higher oil prices are needed to make offshore projects viable, the thinking is that offshore drillers should benefit from OPEC's plans to cut production by 1.5 million barrels per day. Factor in rumors that non-OPEC nations including Russia are willing to make cuts as well and the potential for as much as 1.8 million in monthly production cuts are on the table. If this does play out, it could be a huge step toward reaching supply and demand balance, something oil markets haven't seen in more than two years.

Frankly, the party is probably getting started too early for offshore drillers. There's no doubt that higher oil prices would go a long ways toward igniting interest in offshore projects, but there's a huge supply of cheaper -- and faster to bring on line -- oil onshore that's probably more likely to get tapped first. This is particularly true in North America, where shale drillers have largely become the swing producer with their ability to scale op and down output far more quickly, and more cheaply in terms of initial costs, than offshore. For this reason, offshore production will be the last place to see the benefit of increased investment in production due to higher oil prices.

Furthermore, offshore drillers continue to contend with an oversupply of active vessels. While there has been progress on this front, with approximately 5% of the global jack-up fleet scrapped since the start of the downturn and a more significant portion of the floater fleet either scrapped or idled, the expectations are unchanged in that oil producers are expected to spend less on offshore projects in 2017 than in 2016. In other words, the worst could still be ahead for offshore drillers.

Too many vessels are still working offshore. That must change before prospects really improve. Image source: Getty Images.

This can be seen in the rig status report and backlogs reported by these companies. Transocean has no less than seven currently active vessels with contracts set to expire by July 2017 and no replacement work lined up. Ensco has 19 vessels that will come off contract by Aug. 2017, while Rowan has seven vessels set to come off contract by mid-2017. Ensco and Rowan, as a percentage of their fleets, have the most vessels either idle already or set to be out of work by mid-2017.

Eventually offshore producers will need to make (likely substantial) investments in offshore drilling, simply to regain lost output as existing production declines. What we don't know, however, is exactly how long it will be before that happens and which of the offshore drillers out there will be best positioned for that eventuality. The potential for OPEC and other oil-producing nations to cut production is a great step forward if it indeed does happen. But it's likely to be at least a year -- and maybe more -- before the prospects for offshore drillers really start improving.