As much press as drones have gotten, they're a very difficult business to invest in today. Companies like Amazon.com, Alphabet, and UPS are testing drones, but it's to augment their core business and drones are a small fraction of what they do.

But there are some companies who either make drones or supply the components that make drones great devices. And while they haven't had a great year on the stock market, AeroVironment (NASDAQ:AVAV), Ambarella (NASDAQ:AMBA), and Boeing (NYSE:BA) are three that have done a lot to improve their drone businesses in 2016.

The little drone that could

AeroVironment isn't a household name, but it's the dominant player in small drones for the military. It builds everything from hand-launched surveillance drones to drones that go boom when flown into an enemy target.

What's made AeroVironment a good business in 2016 is that it's still generating strong drone sales while building for a future that will include more commercial and local law-enforcement sales. You can see below that the company is just breaking even, but that's before any real drone revolution outside of the military takes place: 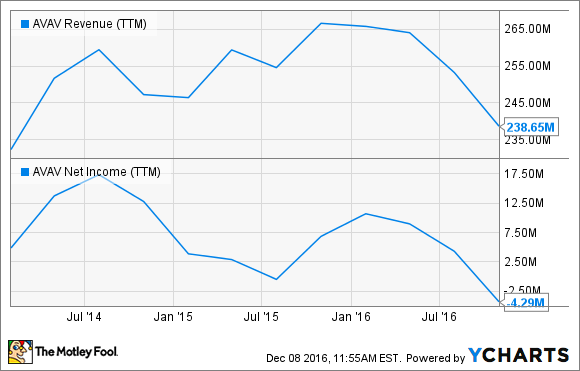 The company is building out commercial capabilities for agriculture, energy, and infrastructure data capture that will bring new information to those industries. But instead of coming to these new markets from scratch, the company can leverage capabilities developed for military customers, building on decades of experience.

As drones move from hobbyists to value-added commercial applications, AeroVironment will be a company to watch. And as one of the few companies with a significant amount of drone revenue, it's one of the best drone stocks on the market today.

Whether directly or indirectly, Ambarella is providing technology that's key to making drones possible. Its video-compression and image-processing solutions are used by drone leader DJI Innovations as well as by GoPro, which is building its own drone and provides a standard camera for many third-party drones.

What gives Ambarella an advantage in the market is that it's not tied to a single drone company or technology. As long as video is part of the solution, which it almost always is, the company can supply chips for drone manufacturers.

Ambarella has struggled a little in 2016, primarily because GoPro has seen a decline in volume, but the company is broadening its customer base and drones look like a promising growth market. 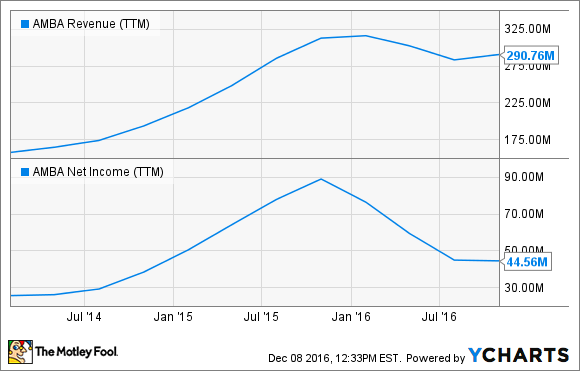 This isn't a direct play on drones, but that's kind of the point. There are a lot of drone companies out there, and many will use Ambarella's technology. As long as drones as a whole grow in the future, it will be a tide that lifts Ambarella's fortunes as well.

The big company betting on drones

The third company I'll highlight as having a good year in drones is Boeing. The company does most of its drone work through subsidiary Insitu, which makes medium-sized drones like ScanEagle, and Integrator, now the RQ-21A Blackjack. These products are growing in popularity with the military, indicated by contracts with the Navy and Coast Guard in the last six months, as well as missions for the British Royal Navy.

What makes Boeing interesting in the drone space is that it could bring decades of flying experience to the drone market and developing new commercial applications. Like AeroVironment's, these could include energy, infrastructure, and agriculture offerings, some of which are being tested today. As it's a household name in the aircraft business, I wouldn't count Boeing out in drones, and with new Insitu contracts and the addition of Liquid Robotics, it made some strong moves in 2016.