In so many ways, General Motors (NYSE:GM) is a different company than it was prior to its collapse during the financial crisis. For the most part, it doesn't seem as if it gets enough credit for the positive changes it's made in recent years.

In 2013, the U.S. industry's auto sales hit 15.9 million -- much lower than this year's third-quarter seasonally adjusted annual rate of 17.7 million. During that time frame, GM managed to raise its average transaction price (ATP) from about $31,000 per unit up to approximately $35,000 and lower its fleet sales as a percentage of total sales from 24.3% in 2013 down to 19.1% during the third quarter. GM's U.S. retail market share has moved up 50 basis points in that time and its North America EBIT-adjusted margin has moved from 7.8% to 10.7%.

Despite making all of these improvements, doubt still lingers about GM's ability to keep a lid on incentive spending, which can quickly erode profitability. Over the next year, we'll figure out whether incentive spending will hurt the automaker's business or become the next checkbox marked off for lessons learned, but here's a glimpse of where GM stands now.

While the U.S. industry hums along near record levels and a strong December will push 2016 sales totals above last year's mark, it's true that incentive spending has fueled sales in recent months. In fact, you can see in the graph below how much higher spending was in the third quarter. 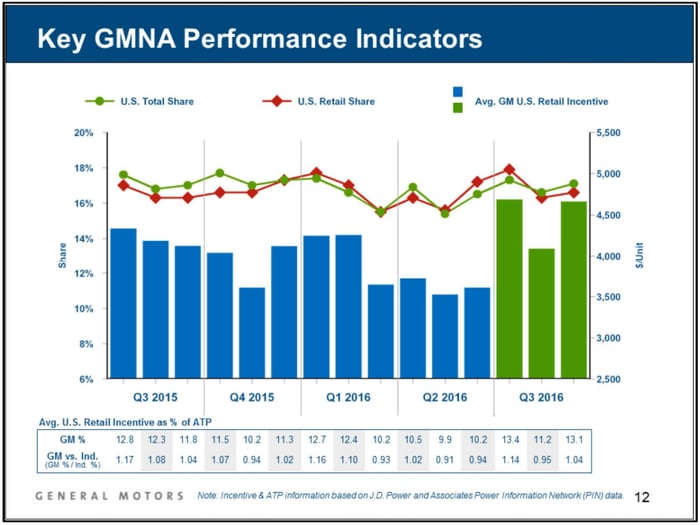 Initially, GM believed incentives would relax during the fourth quarter, but that doesn't appear to be the case. For instance, during November, GM's incentive spending as a percentage of ATP was 13.7%, above the industry average of 12.4% -- a wider gap than its full-year 11.7% incentive to ATP, compared to the industry's 11.4%.

Furthermore, the problem could get worse as we head into the end of 2016, with GM inventories ballooning, a recipe for higher incentives. Inventory currently sits at 86 days' worth, as of Dec. 1, 2016, compared to 84 days' worth one month earlier.

That's the opposite direction of crosstown rival Ford Motor Company's 83 days' supply on Dec. 1, 2016, down from 90 days' supply one month earlier. Both Detroit automakers' supply exceeds the industry average, which checked in at 73 days'. All of those supply figures are higher than the preferred 60-day level for the industry as a whole. According to Automotive News, GM's vehicle inventory has ballooned 28% since Aug. 1, the highest level in almost nine years.

Because of excess supply of certain vehicle models, don't be too surprised if last month's layoff of 2,000 GM workers at assembly plants in Ohio and Michigan isn't the last move to cut production. But keeping a long-term perspective, there are some factors that can help offset the need for higher incentives. For instance, GM's percentage of sales from new or refreshed models -- vehicles in the first 18 months of production -- was 24% between 2011 and 2015, and that's expected to reach 38% between 2016 and 2020. New products drive higher sales volume, transaction prices, and profitability, and require fewer incentives to convince consumers to drive the vehicles home.

As the market continues to plateau, average transaction prices top out, and inventories balloon, the industry is definitely at an inflection point, and 2017 will be very telling about the health of the automotive industry and whether investors can expect record quarterly profits to continue. For GM, this will be another opportunity to prove it is indeed a different company than it was prior to the Great Recession. Keep an eye on those incentive levels and invest accordingly.

Is General Motors About to Revert to Bad Habits? @themotleyfool #stocks $GM Next Article
Current