This past year has been a tale of two oil markets. Oil prices crashed to begin the year, which sent the oil market into a panicked frenzy. That said, prices rebounded as the market came to grips with the fact that fundamentals were improving thanks to declining supplies and robust demand. Industry conditions got even better toward the end of the year, when OPEC announced two agreements designed to stabilize the market and send prices higher. While these agreements set oil stocks up for what could be a great year in 2017, there are still several question marks investors need to watch.

Will the OPEC agreement actually work?

At the end of November, OPEC agreed to cut its output by 1.2 million barrels per day starting on Jan. 1. It followed that deal two weeks later with a pledge from several non-member countries to reduce their production by roughly 560,000 barrels per day for the first six months of next year. The aim of these agreements is to drain the market's current oversupply as quickly as possible. If everything goes according to plan, these deals could eliminate 46% of the market's 300 million barrel oil stockpile within six months.

That said, OPEC has had issues getting its members to follow through with agreements in the past -- not to mention the fact that it does not have anything to hold against non-member nations that might not follow through with their pledges. These past issues and the lack of repercussions have the market skeptical that OPEC will come through.

Thanks to technical innovations, efficiency gains, and other cost savings, shale producers have lowered their drilling costs tremendously in recent years, which gives them unparalleled flexibility going forward. For example, at $50 oil, leading U.S. oil producer EOG Resources (NYSE:EOG) can grow production by a 15% compound annual growth rate through 2020 and pay its current dividend while living within cash flow. Meanwhile, because cash flow and drilling returns rise along with oil prices, EOG Resources can ramp up its growth rate at higher oil prices, with it forecasting the ability to increase its compound annual growth rate to 25% at $60 crude.

Because of this flexibility, there's a potential for shale producers to unleash a torrent of production in 2017 should OPEC send prices higher. For example, Canadian oil and gas producer Encana (NYSE:OVV) has a five-year plan to grow production by 60% and can do so within cash flow as long as oil averages $55 per barrel. That said, Encana recently sold assets and issued stock, which significantly improved its balance sheet and financial flexibility. Because of that, it is possible that Encana and producers like it could accelerate their activities by investing well beyond projected cash flow in 2017. If too many shale producers outspend cash flow next year, it could cause prices to plunge and a new glut to form in the second half when non-OPEC members return to full production.

Will costs start to reinflate?

One of the factors that have helped oil companies stay afloat during the downturn is their ability to take expenses out of their business. Some of these initiatives led to structural changes, which should result in permanent cost reductions for producers. However, a percentage of the cost savings producers have enjoyed over the past couple of years are temporary due to service price decreases. For example, North America-focused exploration and production company Apache (NASDAQ:APA) believes that more than half of the 45% reduction in well costs it has captured since 2014 are structural in nature: 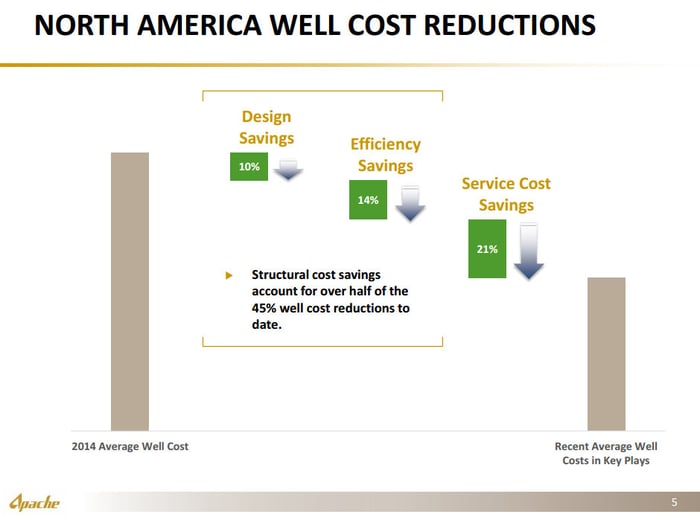 That said, this slide also implies that nearly half of Apache's cost savings are not structural and could reinflate as drilling activities increase. Those costs could inflate quickly, which is something that oil-field service giant Halliburton (NYSE:HAL) hopes will happen. On Halliburton's third-quarter conference call, its management team said that it is willing to give back some of its market share gains to improve margins. Meanwhile, another Halliburton executive characterized pricing negotiations with customers as a "barroom brawl" because customers do not want to give back the price reductions they won over the last few years. That said, Halliburton clearly wants to raise prices, which could hurt smaller shale drillers in particular because they lack the bargaining power. Because of this, they might not be able to stretch their capital dollars and drill as many wells as they had hoped next year.

While the oil market is starting to return to some sense of normalcy, 2017 could be a volatile year. Oil prices could rally sharply to start the year as the OPEC agreement starts draining supplies. There's a real risk, however, that producers could get overly enthusiastic and overshoot on production or that costs could reinflate too quickly and hold back profit growth. Either way, the largest shale producers stand to benefit from this volatility because they have lower structural costs, which gives them the flexibility to ramp spending and production growth up or down to match market conditions.