With 2016 ending, and the election behind us, it's time to think about some of the best moves to make in your portfolio that could perform well in 2017 and beyond. One of my favorite places to look for stock ideas is Berkshire Hathaway's (NYSE:BRK.A) (NYSE:BRK.B) stock portfolio, much of which was hand-picked by the Oracle of Omaha himself, Warren Buffett.

With that in mind, here are three stocks from Berkshire's portfolio that I'm keeping an eye on as we head into 2017. In fact, I already own all three and am considering adding more to each position as the New Year approaches.

Worth a look, even after a big rally

Bank of America (NYSE:BAC) has had a tremendous rally over much of 2016. After bottoming out at less than $11 in February, the stock has more than doubled, trading for about $22.50 as I write. Even so, I have no plans to sell a single share, and I think the "Trump rally" for big banks could still be in its early stages.

To be clear, Berkshire doesn't actually own Bank of America -- not yet. During the financial crisis, Berkshire made a $5 billion investment in the bank that included warrants to buy 700 million shares of the bank before September 2021, and Buffett has made it clear that Berkshire plans on exercising these warrants.

In addition, Trump's promise to lower regulation could mean looser capital requirements and smaller compliance costs for the bank. This development would allow the bank to make more loans, increase efficiency, and simply make it easier for the bank to conduct business.

As a final thought on Bank of America, keep in mind that even with the big rally, the stock still trades for a 7% discount to its book value. 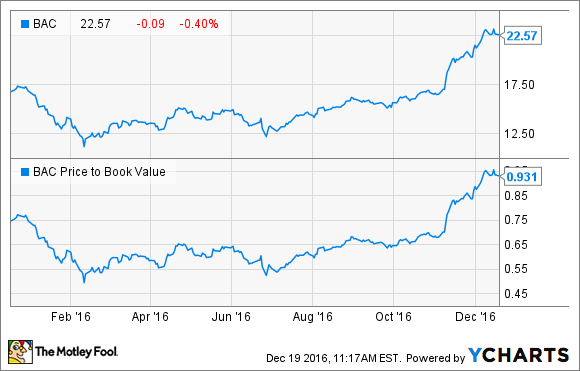 Low valuation and a thriving business

From a valuation standpoint, General Motors (NYSE:GM) is one of the cheapest stocks in the market. With a P/E multiple of just 6.1 times 2016's expected earnings and a 4.2% dividend yield, GM appears to be a value-seeker's dream.

First the bad news. The U.S. auto market has been growing for several years and looks like it's plateauing, which could mean increased competition and shrinking margins. Also, it's still somewhat unclear how much damage the flurry of recalls over the past few years has done to GM's brand image. Finally, there is a lot of uncertainty surrounding the Trump presidency. Trump's trade policies could put GM's international growth in jeopardy, and the interest-rate growth that's expected to come with Trump's growth plans could hurt GM's business.

Despite these negative factors, GM still looks promising. The company's Chinese sales have been soaring, up 8.5% in the past year alone, and with the continuous growth of China's middle class, this trend could continue for years to come. GM has also dramatically improved its efficiency in recent years, and newer models, such as the widely praised Malibu, have higher margins than the models they replace.

Even if GM's earnings were cut in half, the stock's valuation would still be attractive. GM is wisely taking advantage of the cheap valuation and buying back as much of its own stock as it can, and you can do the same.

The most obvious Buffett stock to buy now

As a final suggestion, perhaps my favorite Buffett stock to buy now is Berkshire Hathaway itself -- probably the Class B shares for most readers. I've written before about the reasons for owning Berkshire for the long term, including its diverse portfolio of fully owned subsidiaries as well as a rock-solid stock portfolio, but there's an extra reason to consider Berkshire now.

In a nutshell, I think Berkshire could be a huge beneficiary of a Donald Trump presidency. I realize this is somewhat ironic, since Buffett was an outspoken Hillary Clinton supporter, but business-wise, Berkshire could be a big winner over the next four or eight years.

I already discussed how Trump's pro-growth and anti-regulation policies could help American banks such as Bank of America, as well as other Buffett financial stocks such as Wells Fargo, U.S. Bancorp, Goldman Sachs, and others.

In addition, Berkshire's core business of insurance could benefit tremendously. Insurers don't aim to make their money through the premiums you pay; rather, their main source of profit is to invest the premiums they've collected but haven't paid out yet, and earn money from their investments. So as interest rates rise, so can profits on invested reserves. As I write, Berkshire has about $85 billion in cash on its balance sheet, so an increase of a percent or two over the next few years would translate to billions in additional profit. Finally, Trump's plans to lower regulation could translate into tremendous cost savings for Geico and other Berkshire insurance subsidiaries.