The Oracle of Omaha is known for his love of high-quality banks, and Bank of America is definitely on the list.

In the aftermath of the financial crisis, Warren Buffett's Berkshire Hathaway (BRK.A -0.82%) (BRK.B -0.90%) made a substantial investment in Bank of America (BAC -4.26%) in 2011. In his most recent letter to shareholders, Buffett spoke favorably about this investment and its future in Berkshire's portfolio. Here's why Buffett might like Bank of America as a long-term investment, and why you may want to put the bank on your radar, too.

Buffett's commentary on Bank of America
As a result of this investment, Berkshire has the option to buy 700 million shares of the bank for $5 billion any time before September 2021, and also owns $5 billion of Bank of America 6% cumulative perpetual preferred stock.

First of all, whatever decisions Berkshire Hathaway makes with its Bank of America investment from here on out, it's already been a big winner. Buffett's option to buy 700 million shares works out to a share price of just $7.14, a 47% discount to the bank's current price of $13.50 as of this writing. In other words, Buffett can buy $9.2 billion worth of stock for $5 billion.

Additionally, Buffett was able to negotiate a deal directly with Bank of America's management that you or I could never get. Berkshire Hathaway's total price for the preferred stock and the options to buy 700 million shares was just $5 billion. Effectively, Buffett paid face value for the preferred stock and received the warrants (options) for free. Keep in mind that at the time of the deal, Bank of America shares traded for just over $8.00, so the warrants didn't have much intrinsic value yet, but it was still a great deal for Buffett.

Regardless of Berkshire's special deal, the important thing to investors like you and me is Buffett's thoughts on the future of this investment. In his letter to shareholders, Buffett said that Berkshire is likely to purchase these shares just before the expiration of the option, and could possibly sell its preferred stock in order to fund the purchase. He also specifically said that Bank of America is an investment that Berkshire values highly.

This is extremely significant, because if Berkshire wasn't optimistic about Bank of America's merits as a long-term investment at its current price, it could simply exercise its options now and sell the shares, pocketing an easy $4.2 billion profit.

A much-improved bank that's still cheap
Bank of America has come a long way since the financial crisis. As my colleague John Maxfield pointed out in a recent article, 2015 was the first year in nearly a decade that the bank produced significant profits for four consecutive quarters. In fact, the bank's net income of almost $16 billion was by far its best performance in recent history.

Plus, the bank is much more stable in terms of its ability to absorb another recession or crash. The bank's capital levels are well above the threshold of a "well capitalized" bank, which should allow the bank to increase its dividend payment and/or its buyback program when the Federal Reserve's comprehensive capital analysis and review (CCAR) process is completed in June.

My point here is that, even though the bank is much more responsible and well-capitalized than it was just a few years ago, this fact isn't reflected in the share price. In fact, even after the rebound, you'd have to go back to 2012 to find today's valuation. 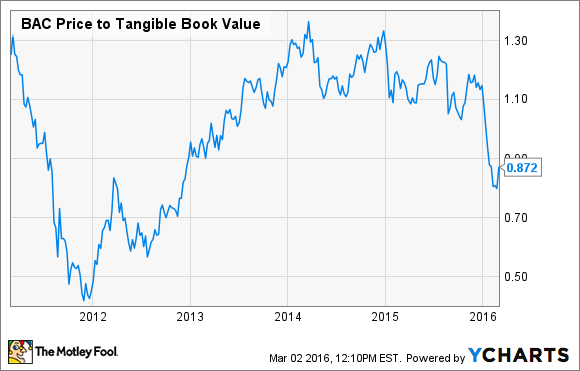 Granted, there are some risks facing the bank. For example, Bank of America has $21.3 billion in outstanding loans to energy companies, and if low oil prices persist, we could see a wave of defaults. And, the persistent low interest environment has made it difficult for all banks to grow their net interest margin.

Should you jump in?
Despite the risks, I feel that Bank of America's progress and its low valuation more than make up for them. Buffett obviously feels that Bank of America is attractively valued at its current price; otherwise he could sell his warrants and move on. Even after the latest rebound, Bank of America is still an attractive long-term investment, and one that you may want to consider for your portfolio while it's still so cheap.