Merrimack's stock was sliced in half in 2016. Image source: Getty Images.

While 2016 was a rough period for the biotech industry in general, shareholders of Merrimack Pharmaceuticals (NASDAQ:MACK) had to suffer through an especially brutal period. Investors in the cancer-focused biotech had to stomach a 47% decline during the year, according to data from S&P Global Market Intelligence. That was a far worse decline than the 17% pullback that was rung up by the First Trust NYSE Arca Biotech ETF (NYSEMKT:FBT). 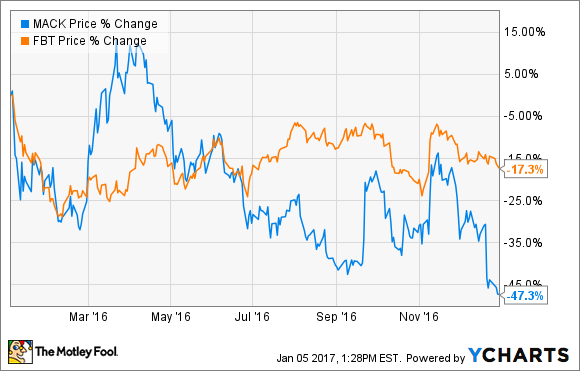 As the chart above indicates, Merrimack's stock gave its investors a wild ride during 2016. Here's a recap of the company's most important news items that drove the stock price during the year:

Given the influx of positive and negative news during the year, it should come as no surprise that the company's stock went on a roller-coaster ride.

Merrimack continues to offer investors reasons to be both optimistic and cautious. On the plus side, Onivyde sales continue to climb, and with Shire launching the drug in Europe, Merrimack is opening up a new revenue stream that should help to reduce its heavy losses. In addition, the company's pipeline continues to look intriguing, and if Onivyde can win a thumbs-up as a front-line treatment for metastatic pancreatic cancer, then sales could surge.

On the downside, Merrimack continues to carry a massive amount of debt, and its losses are not expected to end anytime soon. In total, management expects that it only has enough liquidity to fund its operations into 2018, which means a capital raise could soon be in the cards. If true, it could be highly dilutive to shareholders.

Given all of the above, I continue to believe that Merrimack is far too risky to warrant an investment. For that reason, I plan to continue to root for it from the sidelines.