Shares of Merrimack Pharmaceuticals (MACK 0.25%), a commercial-stage oncology company, plunged more than 20% in August according to data from S&P Global Market Intelligence. That was much worse than the biotech sector in general as measured by the SPDR S&P Biotech ETF (XBI 3.09%), which, by comparison, dropped by only 3%. 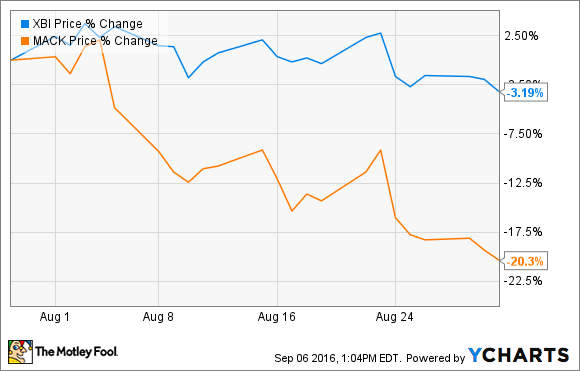 Mixed results from the company's second quarter appear to be the primary reason shares swooned.

Merrimack's top line came in at a very healthy $33.7 million during the second quarter, which was comfortably ahead of the $26.1 million Wall Street was expecting. The beat was primarily caused by a 71% jump in collaboration revenues received from its partner, Shire (NASDAQ: SHPG), which totaled $19.3 million for the period.

Sales of the company's metastatic pancreatic cancer drug Onivyde rose sharply during the quarter, coming in at $12.9 million. That was up a strong 29% when compared to the first quarter.

Unfortunately, Merrimack struggled to turn the big revenue beat into success on the bottom line. Net loss for the quarter was $50.8 million, or $0.40 per share, which was much higher than the $0.33 analysts had projected. However, it's worth pointing out that the company's quarterly loss included a $14.6 million one-time, non-cash loss related to the conversion of convertible notes.

Still, traders look like they remained focused on the higher-than-hoped-for expenses, which looks to be the likely culprit behind the company's share price woes.

Looking a bit beyond the numbers, there are reasons to believe revenue will continue to move higher in the years ahead.

For one, Merrimack recently announced that the Committee for Medicinal Products for Human Use, or CHMP, issued a positive opinion on Onivyde. That gives it a better-than-average chance of getting the green light from European regulators, and it sounds like the company's international marketing partner Shire is ready to start start selling the drug once a final ruling is in hand.

There's also the chance Onivyde could win label expansion claims in the years ahead. Merrimack is currently in Phase 2 studies researching Onivyde as a front-line treatment for metastatic pancreatic cancer in patients who were previously untreated. A data readout is expected in 2017 for this study, which means a second indication could be in hand within the next few years.

That's all good, but investors' eyes are likely to remain trained on the company's cash balance for the next few quarters. Merrimack ended the second quarter with only $82.7 million in cash on hand, which isn't much when compared to the company's quarterly net loss of $50.1 million. Those numbers seem to imply that yet another capital raise could be coming, which isn't great news since the company's stock is down by more than 53% over the past year. In addition, Merrimack's total long-term debt at quarter end stood at $215 million, so it might be unappetizing to add even more debt to the company's balance sheet at this point.

Taking all of that into consideration, I'm personally content to pass on Merrimack's stock right now, even at today's depressed prices.

Brian Feroldi has no position in any stocks mentioned. Like this article? Follow him on Twitter, where he goes by the handle @Longtermmindset, or connect with him on LinkedIn to see more articles like this.

Why Merrimack Pharmaceuticals Got Crushed 23.8% in January
376%