Although 2016 wasn't exactly the greatest year for healthcare stocks in general, there really aren't very many true bargains to be found in the industry. However, three healthcare stocks do appear to be priced well below what they're worth. Here's why Gilead Sciences (NASDAQ:GILD), Lantheus Holdings (NASDAQ:LNTH), and Mallinckrodt (NYSE:MNK) look to be ridiculously cheap right now. 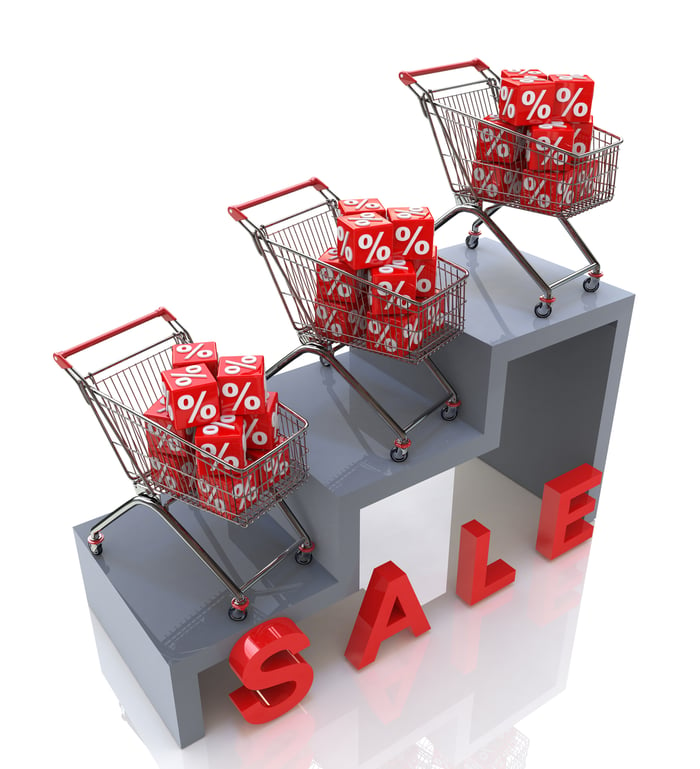 Shares of Gilead Sciences are trading below 7 times trailing 12-month earnings and forward earnings. Those are the lowest multiples for the biotech in more than a decade. Gilead's stock has dropped like a brick over the past 18 months because of slumping sales for its hepatitis C virus (HCV) franchise.

Lower revenue doesn't mean Gilead is strapping for cash, though. In fact, the big biotech remains a cash flow king. In the first nine months of 2016, Gilead generated operating cash flow of nearly $13.2 billion. That kind of performance allowed the company to build up a sizable nest egg of $31.6 billion in cash, cash equivalents, and marketable securities as of the end of the third quarter in 2016. Gilead's cash position is undoubtedly larger by now.

Buying Gilead Sciences at the current price seems like a pretty good bet over the long run. Although HCV drugs Harvoni and Sovaldi will likely continue to see sales slide, the company should offset at least some of those losses with its newer HCV treatment Epclusa. Gilead's HIV products also continue to perform well.

Gilead also has announced its intention to look for strategic acquisitions. A smart buyout of a smaller biotech several years ago led to the company's incredible success with Harvoni and Sovaldi. In the meantime, Gilead continues to reward shareholders with increasing dividends and share buybacks.

Lantheus Holdings: to Definity and beyond

Lantheus' stock trades at less than 11 times trailing-12-month earnings and doesn't have a much higher multiple based on forward earnings. Unlike Gilead Sciences, the diagnostic medical imaging agents company's shares have been on a roll lately -- up more than 350% since June 2016.

Ultrasound contrast agent Definity remains Lantheus' fastest growing and highest margin product over 15 years after its initial launch. The company projects even further market penetration. Definity currently accounts for over 40% of Lantheus' total revenue. That percentage should increase in the coming years.

The company does have a couple of other key products, though. TechneLite is a technetium generator used by radiopharmacies. The product generated roughly one-third of Lantheus' total revenue during the first nine months of 2016. Xenon is a radiopharmaceutical gas used to assess pulmonary function and cerebral blood flow. Around 9.5% of Lantheus' 2016 revenue stemmed from the product.

If Wall Street analysts are right, Lantheus could see solid earnings growth of more than 14% annually over the next several years. That kind of growth combined with the stock's low earnings multiple make Lantheus an appealing opportunity for value-seeking investors.

Mallinckrodt: left behind in 2016

Mallinckrodt was one of the 10 worst stocks in the S&P 500 (SNPINDEX:^GSPC) in 2016. However, that dismal performance also resulted in the stock having a really low valuation. Shares of the drugmaker currently trade below 9 times trailing 12-month earnings. Mallinckrodt is even cheaper looking ahead, with a forward earnings multiple of less than 7.

The company's 2016 woes stemmed partially from weakness in its generic-drug business. However, Mallinckrodt also came under attack from noted short-seller Andrew Left. Meanwhile, though, sales of the company's top-selling H.P. Acthar gel continue to grow at a solid pace.

Mallinckrodt's strategy is to grow revenue for H.P. Acthar in the 19 indications for which the drug is currently approved. The company has only actively promoted the drug for 10 of those indications. Mallinckrodt is also looking to get more revenue from other products, particularly Inomax, a nitric oxide inhalation for treating hypoxic respiratory failure in term and near-term infants.

Although Wall Street analysts expect Mallinckrodt's incredible growth from the past few years to taper off significantly, the consensus estimate is that the company will continue to grow annual earnings by 7% on average over the next five years. That isn't stellar growth. But at the stock's current low valuation, Mallinckrodt's shares should have room to go higher.

Gilead Sciences looks like the best pick of these three ridiculously cheap healthcare stocks. Pretty much any good news should send the biotech's stock higher. I expect Gilead to make at least one good acquisition in 2017. The company could also experience some success with its pipeline. Gilead could very well be the greatest healthcare bargain to be found.