Caterpillar's (NYSE:CAT) stock price has been nothing short of impressive over the past year. During that time its revenue and profit have plunged and guidance waned, but the mere hope that its business was bottoming out, along with rising commodity prices and President Trump's infrastructure promises, was enough to drive Caterpillar's stock price higher throughout 2016.

Investors will have to wait and see if its stock price carries that momentum into 2017, but one thing is for sure. As we saw in its fourth-quarter results, top and bottom line are likely to going to keep moving lower. 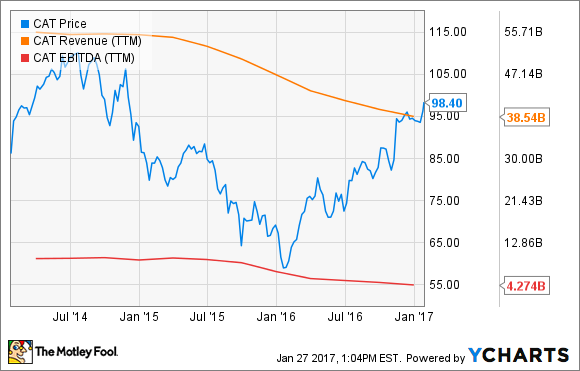 Caterpillar's sales and revenue checked in at $9.57 billion during the fourth quarter, down from the prior year's $11.03 billion, and below analysts' estimates calling for $9.84 billion. The fourth quarter's profit per share checked in with a $2 loss, but when adjusted for items the profit was $0.83 per share, ahead of analysts' estimates calling for $0.66 per share.

Our results for the fourth quarter ... continued to reflect pressure in many of our end markets from weak economic conditions around much of the world. Our team did a great job in the quarter ... aligning our cost structure with current demand while preserving capacity for the future. I'm confident we are focusing on the right areas: controlling costs, maintaining a strong balance sheet and investing in the key areas important to our future.

Here's a quick look at just how consistently Caterpillar's top and bottom lines have deteriorated over the past couple of years. 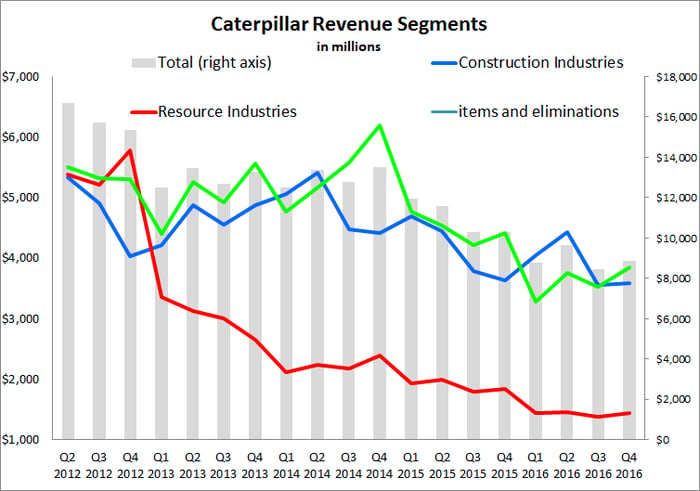 And here are the recent and sharp moves lower in Caterpillar's resource industries segment: 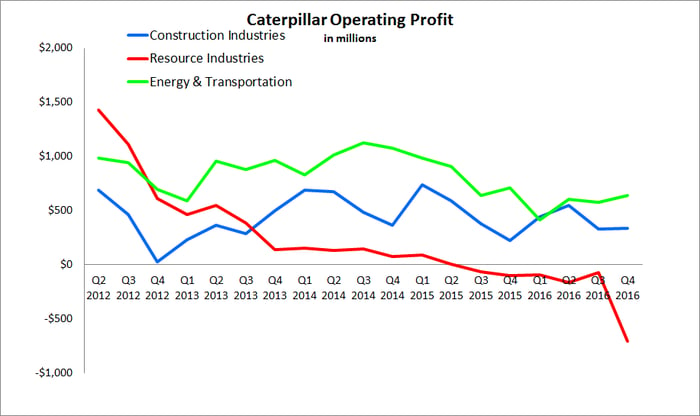 The largest factor driving the resource industries profit to a significant loss was a goodwill impairment charge. Excluding that, the loss checked in at $36 million, which was a slight improvement over the prior year's $80 million loss.

Let's consider some of the positives and negatives facing Caterpillar this year, as well as the company's guidance. On a positive note, commodity prices are generally at a higher level than a year ago, which is favorable for Caterpillar's resource industries business. Also, Caterpillar's construction industries business saw sales in China begin to recover in 2016, and Europe finally stabilized. Caterpillar has a strong backlog of orders within its energy and transportation business, and if oil prices continue to move higher, it will be a positive for its businesses that support drilling and well servicing.

On the down side, while commodity prices have increased, Caterpillar doesn't believe that mining companies will increase capital expenditures in 2017, which will put another year of pressure on its top line. While the promise of infrastructure construction in the U.S. is a positive factor, the truth is that plenty of used equipment is weighing on Caterpillar's sales, and that won't change in 2017.

In all, this situation led Caterpillar to pull back on its 2017 guidance. Not only did Caterpillar reduce revenue guidance by about $500 million, but it also expects profit per share to reach $2.30 in 2017, down from its prior guidance of $2.35 per share.

Adjusted profits will check in around $2.90 this year, down from its prior guidance of $3.25. Ultimately, it doesn't look as if 2017 will generate a rebound in its top-line revenues, but that sure hasn't stopped its stock price over the past year. And as long as commodity prices continue to rise, Caterpillar will continue to move higher.