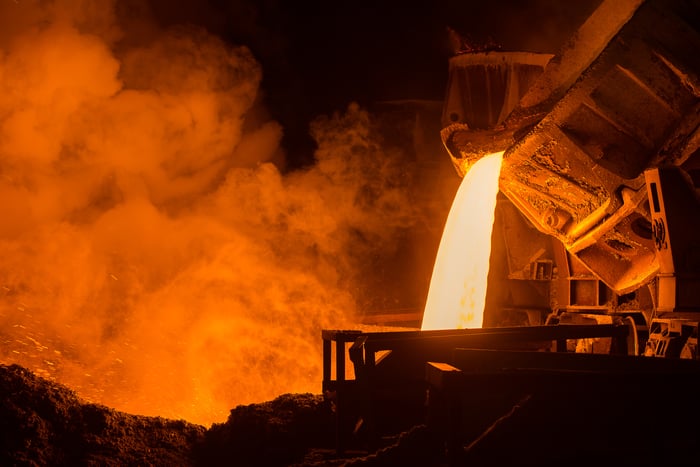 United States Steel Corporation (NYSE:X) reported fourth-quarter and full-year 2016 earnings on Tuesday -- but it was two full days before the full effect became apparent: the stock jumped as much as 11.5% in Thursday trading, before closing up 11.2%.

After it reported a loss for the fiscal fourth quarter, U.S. Steel's stock initially declined in value, falling more than 4% in Wednesday trading. What saved the stock price, it seems, was that a pair of bargain hunters from Wall Street swooped in to recommend buying U.S. Steel on the cheap. First, Wednesday morning, Jefferies reiterated its buy rating on the stock. Then, late Wednesday, Bank of America Merrill Lynch announced an upgrade to "buy" of its own.

As a coup de grace, on Thursday, Goldman Sachs jumped on the train -- sort of -- recommending that investors buy U.S. Steel competitor ArcelorMittal (NYSE:MT), in the process echoing Jefferies' and Merrill's bullish comments on the steel industry in general. Goldman's "conviction buy" rating on Arcelor seems to have tipped the balance in favor of U.S. Steel as well, at least in some investors' minds.

Now we wait and see if all of these analysts are right. Key to the buy theses are predictions that:

If all that works out as planned, U.S. Steel says it can bring in earnings before interest, taxes, depreciation, and amortization (EBITDA) of $1.3 billion this year -- and justify analysts' faith in the stock's revival.