It's no secret that China is incredibly important to Ford Motor Company (NYSE:F): That's been covered thoroughly since the company doubled down on Asian investment in 2012. Over the past decade it's been the land of low-hanging fruit for the folks at the Blue Oval, as Ford has just been getting its foot in the door of China's major markets. Bulls feel that an increased sales effort in China is one of the quickest ways to narrow the gap between Ford's sales and those of General Motors, which sold more than three-and-a-half times the number of vehicles Ford did in China during January.

With Ford's sales kicking off 2017 with a prompt 32% decline, how worried should investors be? The answer: not as worried as you might think. 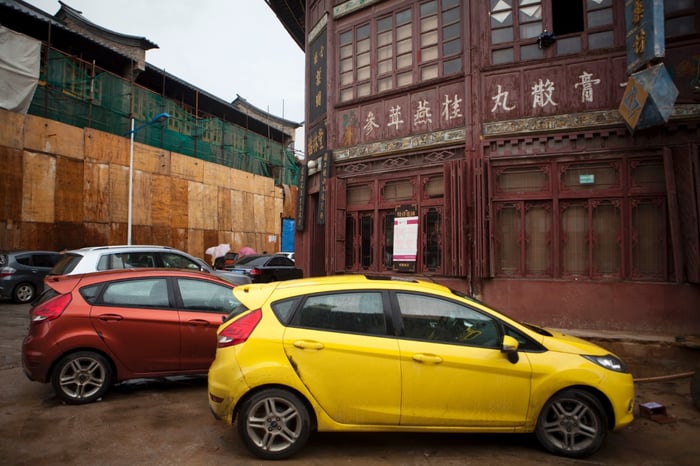 Ford and its joint ventures sold 88,432 vehicles in China last month, which was a far cry from last January's 130,832 units -- more on this shortly. Ford's passenger-car joint venture, Changan Ford Automobile, was the hardest hit, with sales declining from more than 111,000 units last year down to 66,163 units last month. Ford's volume of imported vehicles increased, although not nearly enough to move the needle, up to 2,020 units; its Jiangling Motors Corporation joint venture posted a 17% sales gain, to 20,249 units.

For some investors, Ford's 32% sales decline in China in January is a head-scratcher, especially considering that the automaker posted a 14% gain to a company-record 1.27 million units during 2016. But the truth is, the comparison isn't apples-to-apples.

"January was an unusual month with the earlier timing of the Chinese New Year holiday and the impact of the reduced tax incentive," said Peter Fleet, vice president of marketing, sales and service, in a press release. "Sales of vehicles not affected by the tax incentive were strong. In fact, the Edge, Explorer and Mustang all saw an increase over a year ago despite the fewer selling days. So the underlying market conditions and customer demand for our exciting new products remains strong."

Little cause for concern

As China's vehicle sales slowed during the summer of 2015, the government stoked the fire by cutting the purchase tax on vehicles with a 1.6-liter or smaller engine in half, from 10% down to 5%. That fueled sales throughout 2016, and as consumers assumed it would bump back up, it likely pulled some demand forward from January in a last-ditch attempt by consumers to take advantage of the deal.

But the real issue behind Ford's massive decline last month was simply China's Lunar New Year holiday, which meant five fewer selling days for the month of January compared to the prior year. So while January looks horrible in the headlines with a 32% drop, February will likely be a similarly lopsided result -- to the positive side.

It's also worth remembering that Ford is selling more luxury vehicles in China, with Lincoln posting a nearly threefold increase during 2016 compared to the prior year. It's also selling more SUVs and premium trims -- although passenger cars still generate a large percentage of total volume. The impact of a slightly higher purchase tax is fading, after moving up to 7.5% when January kicked off. With those factors, and selling days balancing back out between comparisons after February ends, Ford investors will realize there's much less to worry about than the big decline suggests.

How Concerned Should Ford Motor Co. Investors Be About Sales in China? @themotleyfool #stocks $F Next Article
Current