Last year wasn't a great one for Honeywell International (NASDAQ:HON), at least from an operational perspective. Core organic growth declined 1%, as management lowered its revenue guidance due to a combination of three separate issues in its aerospace and PMT (performance materials and technologies) segments. Ultimately, full-year revenue came in at $39.3 billion, somewhat below the guidance for $39.6 billion to $40.9 billion given at the start of 2016.

However, listening in on the recent investor conference call, it appears that one of those issues is turning around significantly, another has a mixed near-term outlook, and -- most interestingly for long-term investors -- the third appears to be for a cause that's likely to pay off in a big way for years to come. Let's take a look at the nuances in management's presentation.

Honeywell reports out of four segments, and as you can see below, the aerospace and PMT segments are its largest in terms of profit: 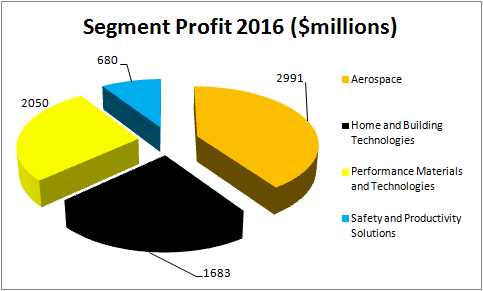 In the third quarter of 2016, management reduced full-year overall revenue guidance by around $200 million to $400 million, it was partly due to three factors:

The fourth-quarter earnings report given in February had management outlining how UOP was seeing a positive outlook, and how aerospace OEM incentives came in slightly lower than anticipated. However, on a more negative note, the business-jet market still looks weak in 2017.

What management said at the investor conference

The key takeaway from the investor conference isn't about the headline guidance for 2017 -- that remained untouched -- but rather, about how incoming CEO Darius Adamczyk plans to generate growth through a more aggressive capital deployment strategy.

Turning back to the three issues discussed above, management gave good color on all of them:

The business-jet outlook is a bit disappointing, but hardly surprising given the commentary of other companies in the sector such as Rockwell Collins (NYSE:COL).

Turning to PMT, the segment has been the focus of heavy capital investment in recent years, and this has reduced free cash flow generation at the company. However, management outlined that sales of its so-called breakthrough initiatives in PMT increased 43% in 2016, and now generate $0.9 billion in revenue (9.7% of PMT revenue and 2.3% for the total company) -- a sign its capital expenditures are bearing fruit.

The segment's margin and sales contracted in 2016, largely due to the incentives granted on new OEM programs, but management's color on the issue suggests it was in a good cause. For example, aerospace CEO Tim Mahoney outlined how Honeywell only won 50% of competitions on platforms in 2003-2013, but the win rate increased to 75% in 2013-2016.

Consequently, he now expects Honeywell's commercial aftermarket revenue to grow at the market rate in the next five years, compared to below the market rate in the previous five years. Moreover, OEM incentives peaked in 2016 and are now set to progressively decrease in the next few years. In a nutshell, the OEM incentives look set to drive revenue growth and margin expansion in future.

Management outlined how its increased capital expenditures (largely in PMT) and OEM incentives (aerospace) were serving to better propel long-term growth for the company. They may be hurting near-term revenue, earnings and cash flow generation, but it's for a good reason.

Moreover, investors should be factoring this into their valuation of the company, and be wiling to accept paying a slight valuation premium due to the potential to grow earnings in future. All told, the ongoing business-jet weakness is a concern, but better end markets for defense and UOP, plus the tangible demonstrations of the value in PMT investments and the OEM aerospace incentives, mean the presentation was a net positive for investors.