A look at why the industrial conglomerate is a better value than you might think.

Following Honeywell International Inc.'s (HON 0.70%) recent 2017 outlook meeting, it's a good time to reassess whether the stock is a good value investment. Let's factor in management's guidance to answer this question.

This may seem esoteric, but bear with me: The best argument for buying the stock rests with its underlying free cash flow generation. With good FCF, a company can do many things, such as increase dividends, buy back shares (which enhances earnings), engage in value-adding acquisitions, or even simply pay off debt.

Indeed, over the years Honeywell International has racked up a pretty strong record of increasing FCF generation. I've included peers and competitors United Technologies and Parker-Hannifin Corporation (PH -0.10%) in the chart below by way of comparison and because they're attractive stocks in their own right. 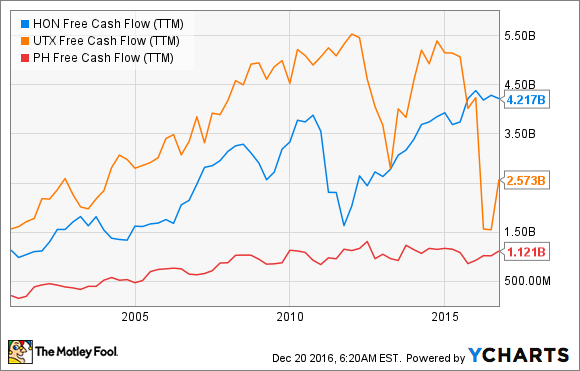 But of course the key thing investors need to look at is the price they're paying for FCF. One valuation method compares enterprise value, or EV (market cap plus net debt), to FCF. Honeywell's EV is currently around $96.8 billion. EV/FCF is a useful ratio because it factors in a company's debt -- something the P/E ratio doesn't do. The current ratio of 22.96 doesn't look particularly cheap.

In fact, if you invert the ratio, you get FCF/EV of 4.35%, meaning Honeywell is currently generating around 4.4% of its EV in FCF. That's not bad compared to the U.S. 10-year Treasury yield of 2.55%, but you can easily find stocks generating better yields -- not least of them Parker-Hannifin. 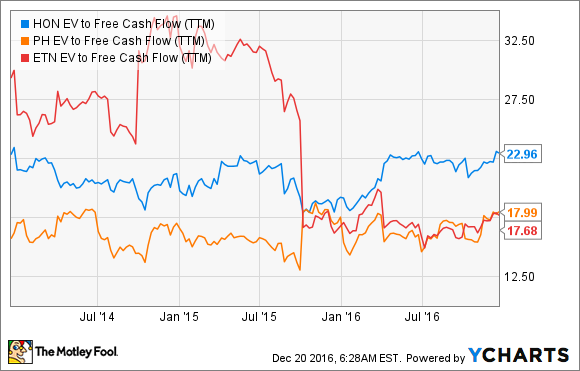 But here's the thing: Honeywell's FCF generation is being temporarily held back by investments made to increase growth in the future. So given these unusual circumstances, how best to value the stock?

Honeywell's management has previously intimated that a capex/depreciation ratio of 1.2 is "normal," or you could assume 1.1. Essentially, you want capex to exceed depreciation, because it's usually a good idea for a company to grow. However, Honeywell's ratio has been extremely high in recent years because of investments made to fund growth. 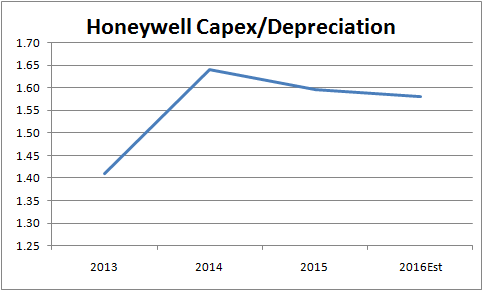 Moreover, the good news is that capex is set to fall and Honeywell is set to generate significantly more FCF in the future. On the presentation, management suggested that capital expenditures will fall from around $1.05 billion in 2016 to $1 billion in 2017 and to a figure in the $800 million range in 2018. Here are the recent capex figures: 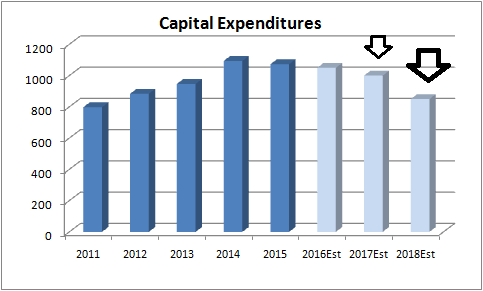 Is Honeywell International a good value?

Based on these numbers, I would say Honeywell is a good value but not a screaming buy. It was a strong buy back at the time the stock price slumped in October, but not so much now. Nevertheless, by my calculations it trades on a normalized FCF/EV yield of 5%, and that's not bad for a company aiming to grow earnings in double digits in the future.

Buying Honeywell stock now won't shoot the lights out for you, but its stock price could appreciate in line with its forecast double-digit earnings growth -- not bad at all.