In the universe of stocks loosely described as "diversified industrial cyclicals," Parker-Hannifin (NYSE:PH) stands out as an intriguing value proposition. In truth, it's been an odd year for the sector: Forecasts for industrial production growth in 2016 have turned negative, while oil and gas capital expenditures continue to disappoint. Case in point, General Electric (NYSE:GE) was the latest to trim full-year revenue guidance on weak oil and gas markets -- but diversified industrials have soared. Let's take a closer look at Parker-Hannifin, and consider what you need to know before deciding whether or not to buy the stock. 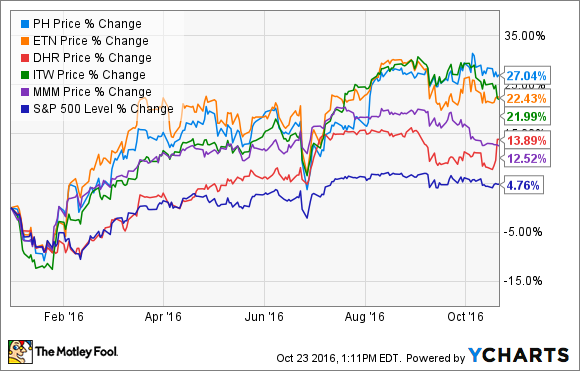 As you can see from the chart above, the stock has outperformed many of its peers so far in 2016, but on an enterprise value (market cap plus net debt) to free cash flow basis it remains one of the cheapest in the group. I like looking at free cash flow because it's what dividends are usually paid from -- and Parker-Hannifin sports a dividend yielding 2% at the moment. 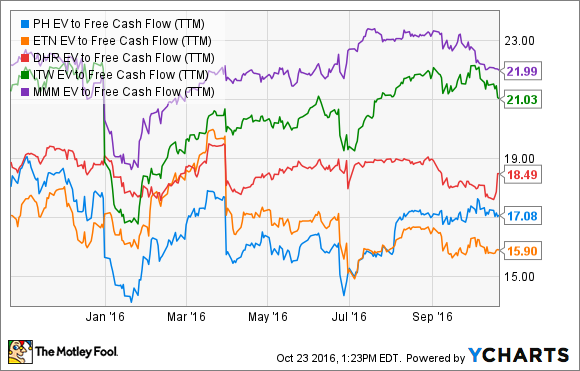 That said, the company's segment operating income fell 1.2% in the first quarter of its fiscal 2017, and revenue is barely set to grow for the year; analysts are projecting only 5.2% EPS growth for fiscal 2017. Moreover, its largest and highest-margin segment (diversified industrial North America) is also experiencing sharply declining organic sales.

But orders growth is positive

It's a difficult environment for Parker-Hannifin right now, but the market seems to be taking solace from the company's return to overall orders growth. As you can see below, the trend indicates that the company may well be over the worst. 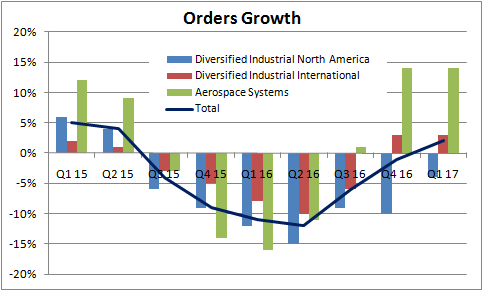 Before you get too excited by the 14% growth rates in aerospace systems, which helped lift orders into growth territory, it's worth noting that on the recent earnings call, CEO Tom Williams recognized that this was due to the normal lumpiness of aerospace orders. Nevertheless, he expects aerospace systems to grow at around 4% in the next three to five years. That's a good growth rate in a slow economy, and both General Electric and Alcoa (NYSE:AA) confirmed the underlying strength in the aerospace industry in recent results.

Second, management's commentary forecasts moderate growth at best for the rest of the fiscal year. COO Lee Banks said on the earnings call he expected that growth would be  "essentially flat in Q2. And then we'd see some small organic growth in year-over-year basis in the second half of the year."

Third, sales of Parker-Hannifin's motion-control systems and filtration solutions are always going to be tied to conditions in U.S. industrial production. As such, management is positive on areas like aerospace, refrigeration, air conditioning and telecommunication, but agriculture, mining, and oil and gas remain negative. Moreover, a look at the latest outlook from Alcoa reveals some weakening in the North American automobile and heavy duty truck industries, and GE's oil and gas revenues continue to disappoint -- implying more near-term downside potential. 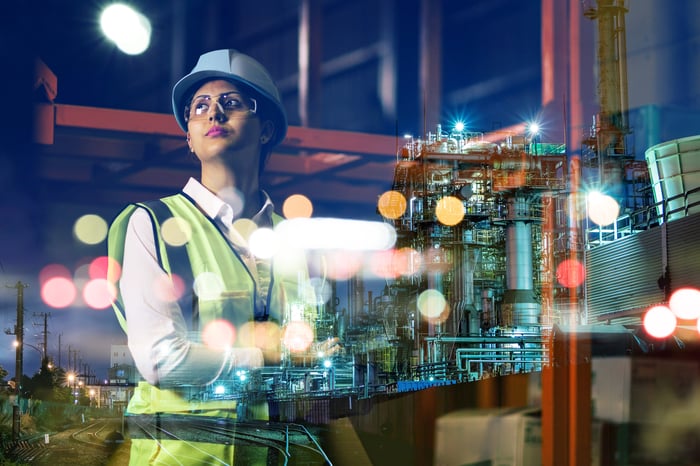 All told, while Parker-Hannifin's orders have turned positive, it still faces headwinds, and growth is likely to be moderate at best. Much depends on the company's so-called Win Strategy, which among other goals, has it focused on using lean enterprise initiatives to generate structural cost savings, with a goal of hitting 17% segment operating margins (see table above) and converting 10% of free cash flow into sales.

Should you invest in Parker-Hannifin stock?

If you believe in creating a diversified portfolio and are happy with the cyclical exposure inherent in industrial stocks, then the answer is "yes." Parker-Hannifin is not headed for stellar growth, but it appears to be headed for stabilization at the very least. Meanwhile, management is engaging in what could be termed as "self-help initiatives." Despite its strong rise this year, the stock's valuation remains attractive. Throw in its 2% dividend yield, and these shares are worth buying in my view.