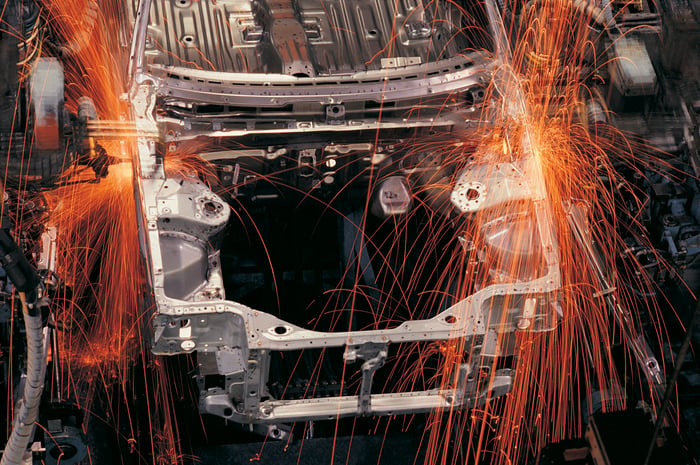 In a year where estimates for U.S. industrial production growth have turned negative and global GDP growth expectations reduced, it's increasingly important to discern which sectors of the industrial economy are outperforming and underperforming. Step forward, Alcoa Inc. (NYSE:AA), a company whose outlook gives great color on which sectors and stocks might be hot in the coming earnings season. Let's look at the key conclusions from management's commentary.

The following table shows how Alcoa's full-year 2016 growth outlook has changed through the course of the year. The figures in bold represent changes in outlook.

There are three key takeaways from Alcoa's evolving outlook in 2016, and they have a direct resonance for prospects at companies such as General Electric Company (NYSE:GE), Johnson Controls (NYSE:JCI), and United Technologies (NYSE:RTX).

A raft of new aircraft platforms and new engines -- most prominently the geared turbofan from United Technologies' Pratt & Whitney, and the LEAP engine from CFM International, a GE joint venture -- are creating some varied conditions. United Technologies and Honeywell International (NASDAQ:HON) are both suffering near-term headwinds on commercial OEM sales as they introduce new products on new aircraft platforms.

Moreover, Alcoa CEO Klaus Kleinfeld spoke of the negative impact on airframe components from reductions in build rates on the Airbus A380, Bombardier CSeries, and Boeing 777. On the other hand, the ramp-up in new engine production is creating strong growth because of a "high level of technical sophistication" and "increased product introduction cost for qualification of the component." Meanwhile, "the legacy engines spares and replacements remain strong."

It creates a mixed outlook for United Technologies -- not least because Pratt & Whitney was forced to reduce its 2016 delivery target on the geared turbofan from 200 to 150, citing issues with a fan blade developed with Alcoa. Meanwhile, General Electric looks relatively better placed -- with LEAP production progressing as planned and having a substantive legacy engine base -- as does Honeywell.

The big positive surprise in the outlook was the upgrade to expectations in the automotive and heavy truck and trailer markets in China. Kleinfeld cited the positive impact of legislation on the automotive market in China, and it appears that the government's incentives are also working well -- it's good news for Johnson Controls, ahead of its spin-off of Adient later this month. Adient has an industry-leading position in China automotive seating market.

However, on a less positive note, Alcoa lowered its estimate for North America automotive, citing rising car inventory and falling demand, although truck demand is up 7.3% year to date.

The outlook for construction, packaging, and industrial gas turbines has been pretty stable throughout the year. United Technologies, Johnson Controls, and Honeywell International all have significant building and construction exposure -- Johnson Controls through HVAC, Honeywell through controls, and United Technologies with Otis elevators and through HVAC with Carrier.

What to expect in earnings season

All told, expect some mixed outlooks from aerospace companies, particularly on the airframe side. Automotive and heavy-duty trucking should see China strengthening, with North America weakening slightly. Meanwhile, the rest of the industrial sector looks to be pretty much on track.