18.1% growth in gaming revenue in March is another sign that Macau is on a big growth trend.

Macau's growth streak is now more than just a blip on the radar -- it's a bonafide trend that investors should take very seriously. In March, gaming revenue in Macau jumped 18.1% versus a year ago to $2.66 billion, marking the eighth straight month of growth. In the first quarter, gaming revenue was up 13% and is now well off its early to mid-2016 lows. 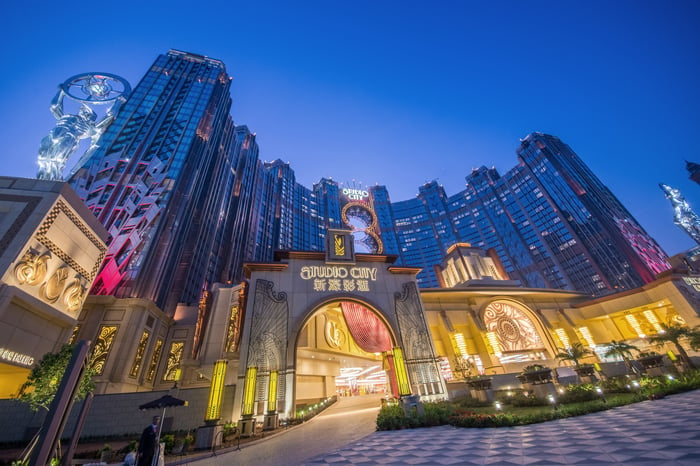 What's going on in Macau

A lot of positives are converging at once that could be affecting Macau. One is that the crackdown on corruption that sent the gaming industry into a tailspin between 2014 and 2016 seems to be subsiding. As wealthy gamblers feel more confident that they know the rules of operation, they're going back to the region, helping VIP play grow.

There have also been a number of new resorts completed on Cotai, with more to come. Las Vegas Sands finished The Parisian, Melco Crown built Studio City, Galaxy added an addition, and Wynn Resorts completed Wynn Palace. And within the next year, MGM Resorts will finish MGM Cotai to complete most of the Cotai Strip vision. Customers want to come see all of these shiny new resorts.

Infrastructure is also improving both within Macau and going into the city. A light rail within Macau continues construction, a bridge between Hong Kong and Macau is underway, there's an airport expansion, and a new ferry terminal is available for trips to Hong Kong as well. This is on top of improving infrastructure between Macau and population centers in Mainland China. And as infrastructure improves, it will make the area more attractive to the billions of people living in the region.

Where does Macau go from here?

Even if Macau doesn't keep up double-digit growth for all of 2017, the momentum is clearly heading in the right direction. And with both infrastructure and resorts improving, there's no reason to think the positive trajectory will stop.

While this is all positive for gaming companies, it may not mean as much growth as you might think. There needs to be a bigger revenue base just to accommodate new resorts so that there isn't canibalization among existing resorts. So, revenue may be flat at existing resorts with the growth going mostly to new ones.

That's good news for those expanding the most, including Wynn, Melco Crown, and MGM Resorts. They've all either doubled, or will soon double, the number of major resorts they have in Macau, and if they don't have to cannibalize existing demand to expand, that would be good. While overall growth is good for Las Vegas Sands, it added a single resort to four other major resorts, so it could conceivably lose market share in the next year, although it will likely grow revenue as well.

The bottom line is that Macau's strong growth papers over a lot of challenges that have hit gaming stocks in recent years. And that's great for long-term investors.