Please ensure Javascript is enabled for purposes of website accessibility
Log In Help Join The Motley Fool
Free Article Join Over 1 Million Premium Members And Get More In-Depth Stock Guidance and Research
By Neha Chamaria - Updated Apr 4, 2017 at 8:11AM

These three potash dividend stocks are the best you can find in the industry today.

Potash stocks have been favorites among dividend investors despite the cyclical nature of the industry. Most potash stocks boast a strong dividend track record, though challenging industry conditions recently compelled major potash producers Potash Corp. of Saskatchewan and The Mosaic Company to slash dividends. Agrium Inc. has kept its dividends intact so far but has been cautious about increases.

Investors in potash stocks, however, may not have to fear further dividend cuts, what with the industry showing faint signs of a revival. Potash is, after all, among the three most important crop nutrients, so demand should pick up at some point in time, allowing potash companies to continue to reward shareholders. Here's a quick lowdown of the publicly traded potash stocks and their current dividend yields:

Among these, Intrepid Potash doesn't pay a dividend, while Compass Minerals, Rio Tinto, and BHP Billiton have very little exposure to potash. With that in mind, let's check out the dividend history and growth potential for the three top potash dividend stocks. 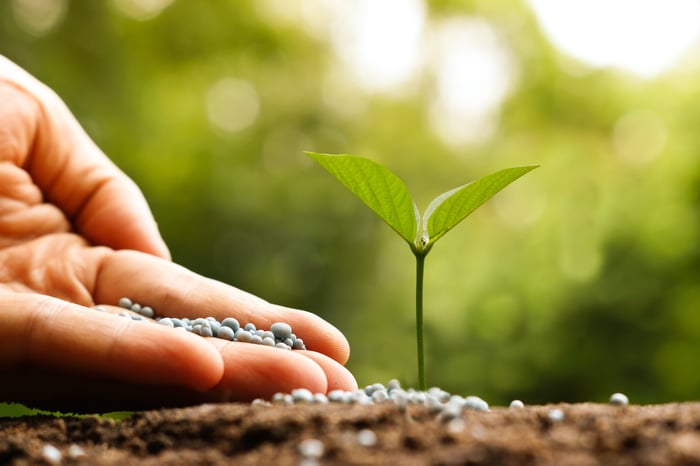 Agrium was pretty miserly with its dividends until about 2012, when a proxy battle with an activist investor compelled management to rethink its policies and reward shareholders more generously. Agrium's dividend has grown leaps and bound since.

To be fair, Agrium is less a potash and more a diversified agricultural company that also sells seeds and crop protection products. Fertilizers accounted for about 41% of its earnings before interest, taxes, depreciation, and amortization (EBITDA) in 2016 of which only about 4% came from potash. Nonetheless, Agrium is among the world's primary potash producers, which is why it is the only other company aside from Potash Corp. and Mosaic to be part of the world's leading potash offshore marketing group Canpotex, which handles exports outside the U.S. and Canada. Thanks to expansion, Agrium's stake in Canpotex increased about 3 percentage points to 10.3% in 2016. 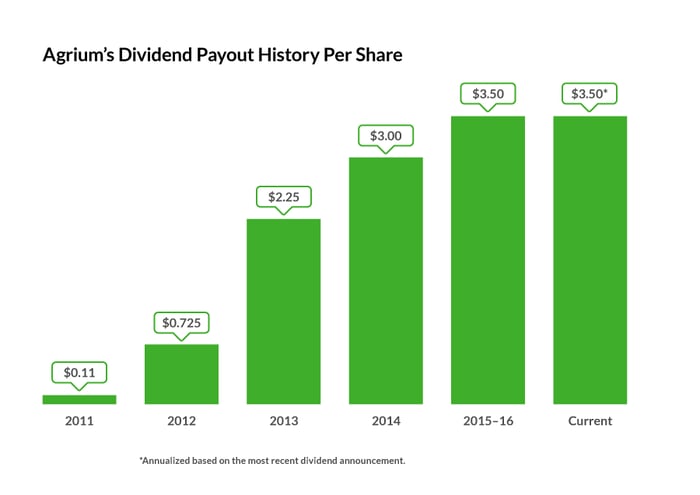 Agrium currently pays 40%-50% of its free cash flow in dividends. As you might've heard, Agrium and Potash Corp. are planning to merge, and the good news is that the merged entity aims to maintain a dividend "equal to" Agrium's current level, which means Agrium's dividends should be intact going forward.

Potash Corp. jolted investors last year when it cut its dividend not once but twice and, boy, how steep were the cuts -- 34% first and 60% the next. Potash Corp.'s aggressive dividend policy was to blame, as its payout had crossed 100% at a time when potash markets were hitting rock bottom. The company was forced to cut dividends for the first time in history. 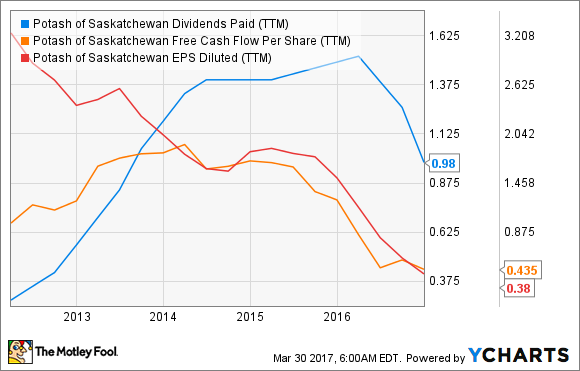 The worst, however, might be over for three reasons: recovering potash markets, declining capex and higher potential cash flows, and impending merger with Agrium that'll create the world's largest crop nutrient company. Both companies are confident of getting the regulatory go-ahead for the merger. If it goes through, Potash Corp. should become a financially stronger company with sustainable dividends thanks to Agrium's diversified portfolio and solid financial standing -- Agrium earned greater profits and free cash flows than Potash Corp. during the trailing 12 months.

Potash Corp.'s current dividend yield of 2.3% might not be enticing, but the company has paid a dividend every quarter since 1990. That's the best you can find in the potash industry.

Mosaic: The most promising dividend stock

It was only earlier this year that Mosaic decided to cut its dividends in line with the tough industry conditions -- it announced a steep 45% cut in annual targeted dividend in one go. But there's a huge difference between Mosaic's and Potash Corp.'s cuts: Mosaic's free cash flow is still enough to cover its existing dividends. In other words, while Potash Corp.'s dividend cuts were desperate attempts after its payout hit dangerous levels, Mosaic's is a proactive step to ensure it can sustain its dividends even during challenging conditions. That's an excellent approach that reflects management's integrity and credibility.

At the same time, management is confident that end markets have bottomed. That, combined with its capital discipline and growth initiatives -- such as Mosaic's impending $2.5 billion acquisition of Vale's Brazilian fertilizer business -- should be rewarding to shareholders in the long run. Mosaic might be a primary phosphate company, but it is also among the world's largest potash producers, accounting for 12% of global and nearly 41% of North America's annual potash capacity. That makes Mosaic one of the best potash dividend stocks you can find.