Potash is a fertilizer used by farmers to increase crop yields. That's important because the world's population is expected to increase to roughly 10 billion over the next 40 years (or so) -- that's 2.5 billion more mouths to feed. And we aren't making any more farmland, so farmers need to do more with less.

That's the compelling backdrop underpinning the stories of Potash Corporation (NYSE:POT) and Mosaic (NYSE:MOS), two of the top potash stocks for long-term investors to buy in 2017.

If I had to pick just one fertilizer name, it would be Agrium (NYSE: AGU), which mixes a global retail business with a fertilizer business. The combination has proven to be a unique and relatively stable pairing. For example, Potash Corporation's gross margin was basically cut in half in 2016 while Agrium's only fell about 6%. It also gives Agrium another lever to pull on the growth front, since it can expand its retail arm regardless of what's going on in the bulk fertilizer space. The problem is that Agrium is heavily focused on nitrogen, not potash. So it's not a great potash stock. 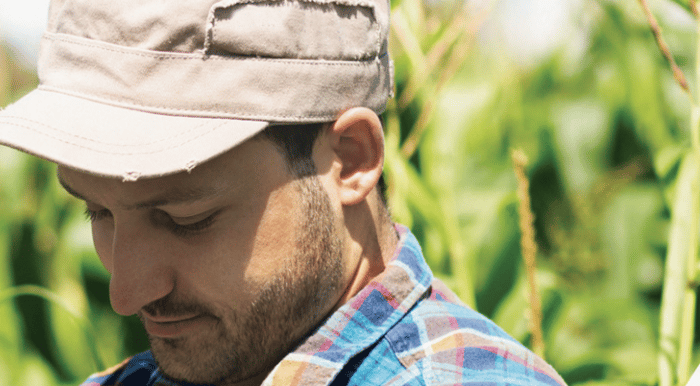 But here's the good news: The weak fertilizer market has led Agrium and Potash Corporation to merge their businesses. It's kind of like getting two companies for the price of one (assuming the merger goes as planned).

Potash Corporation is one of the world's largest potash companies. That hasn't been such a great thing, since potash prices have been weak over the last couple of years. That said, Potash has been working hard to improve its business despite the downturn.

For example, Potash is near the end of an investment cycle that will materially reduce capital spending. Capital spending in 2017 is expected to be 60% lower than it was in 2013. Those investments, plus adjustments made to the company's production profile, should help reduce the company's potash cost per tonne sold by 40% over 2013 levels. The downturn has hurt, leading Potash to trim its dividend a couple of times, but management is doing the right things to adjust.

And the merger with Agrium will make Potash a much stronger company. For example, the combined entity will have a far more diversified portfolio, split across four key businesses: potash (around a third of EBITDA), nitrogen (also about a third), retail (roughly 20%), and phosphate (the remainder). The retail business, notably, provides a stable foundation that Potash currently lacks. 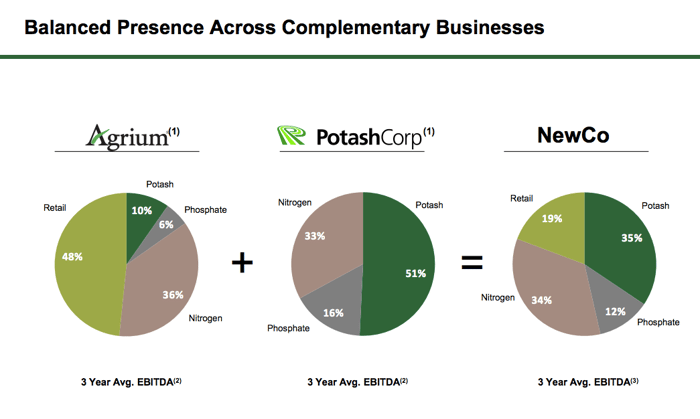 You have to worry about mergers not living up to the hype. But this one looks like it really will make Potash a better company (even if the $500 million in annual cost savings doesn't pan out). With Potash's stock price down more than 50% over the past five years, 2017 could be a good time to jump aboard for long-term investors as Potash remakes itself for the future.

Mosaic primarily sells phosphates and potash. As one of the largest potash producers on Earth, it's a good way to tap into the potash space. And, like Potash, Mosaic has used the industry downturn to improve its business.

That's meant investing in assets that will eventually help reduce costs or improve margins. The investment cycle, however, is just about over. For example, capital spending in the phosphate business is expected to pick up this year, but fall in 2018 and beyond. The big change is a portfolio shift toward premium products that have higher margins. Potash spending, meanwhile, peaked in 2013 and has held at a relatively stable, and lower, level since. All of the spending has helped push potash cash production costs from around $130 per tonne in 2013 to under $80 per tonne by the end of 2016. 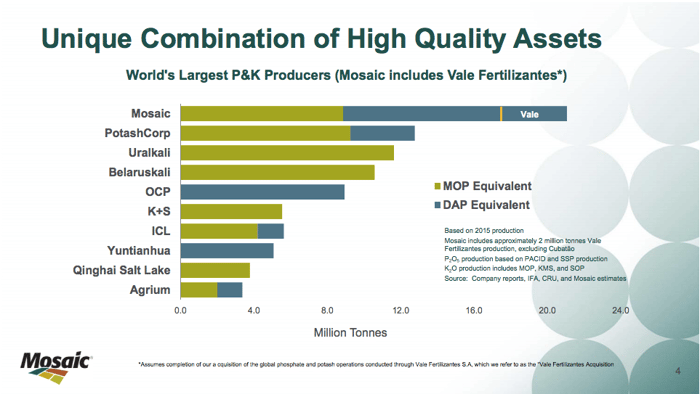 This isn't the only important activity taking place. Late in 2016, Mosaic agreed to acquire Vale SA's (NYSE:VALE) fertilizer business in Brazil for $1.25 billion in cash and $1.25 billion in stock. Assuming the deal gets done as expected, Vale will be Mosaic's largest shareholder. These are complementary assets that increase Mosaic's scale in a key market. But what's most exciting about the deal is that Mosaic is using the downturn to acquire assets that will position it well for a fertilizer recovery. With its stock down around 50% over the last five years, too, the company's expansion move makes this another solid potash option for 2017.

There's no question that potash has been a tough niche the last few years. However, the world has a clear need for expanding food production. Fertilizers like potash are a key part of the equation. Potash and Mosaic have struggled, for sure, but they are both making smart moves to position themselves for an eventual upturn. I prefer the Potash/Agrium combination here because of Agrium's retail arm. But for investors who wants a purer play on bulk fertilizer, Mosaic might be the better choice.