Please ensure Javascript is enabled for purposes of website accessibility
Free Article Join Over 1 Million Premium Members And Get More In-Depth Stock Guidance and Research
By Reuben Gregg Brewer - Apr 12, 2017 at 9:11AM

Gold and silver miner Coeur Mining has been selling assets, and Pan American Silver bought a cast-off. Which is the better buy right now?

Precious metals companies Coeur Mining, Inc. ( CDE -0.76% ) and Pan American Silver Corp. ( PAAS -0.63% ) inked a deal in early 2017. Pan American's mine acquisition should allow both silver and gold miners to further their internal goals, but which mining industry player is in the better position at this point?

Getting to the core

After a couple of key acquisitions in 2015, Coeur Mining is refocusing its business around core assets. A part of that process was selling non-core assets and, equally important, using that cash to trim debt. The numbers on the balance sheet front are pretty impressive, with debt down by roughly 60% between the third quarter of 2015 and the end of last year. 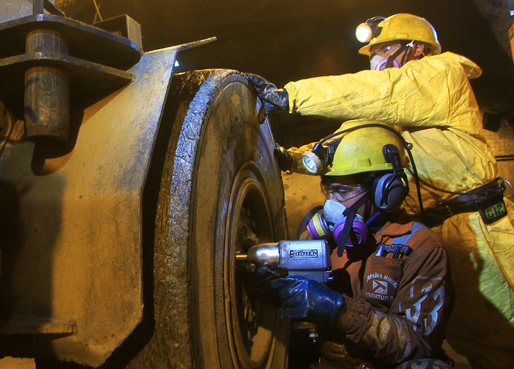 Meanwhile, Coeur has been upping its capital spending, with a 45% year-over-year increase in 2016 and plans for a further 30% increase this year. The focus is on near-mine exploration, which will account for roughly 70% of 2017 spending. This type of expansion is usually less risky than building new mines. Coeur expects both gold and silver production to increase this year, pushing its silver equivalent production up for the fourth consecutive year.

And while all of this expansion has been going on, costs have been heading generally lower. That said, the all-in sustaining costs projection for 2017 of $15.75 to $16.25 per silver equivalent ounce makes Coeur a marginal miner that needs relatively high commodity prices to turn a profit. That's the fly in the ointment that makes this choice more difficult. 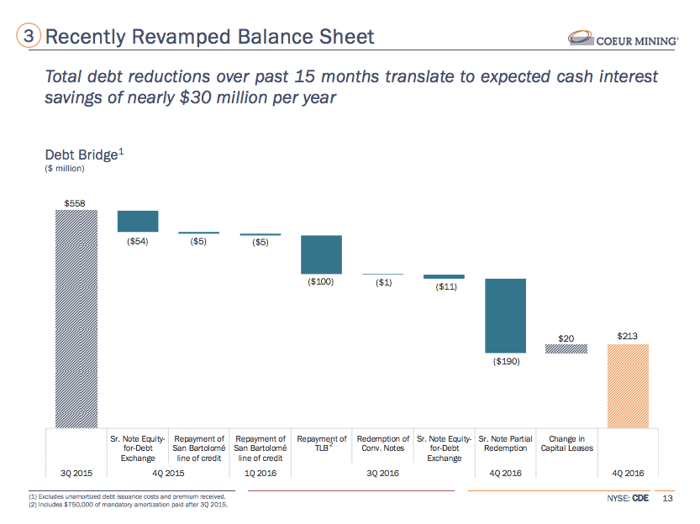 Pan American Silver doesn't expect production to start picking up again until 2018 and 2019, as expansions at existing facilities bear fruit. That said, the miner has a cost advantage, with all-in sustaining costs per silver equivalent ounce projected to be between $11.50 and $12.90 in 2017, a couple of dollars lower than Coeur's. That makes it much easier for Pan American's mines to turn a profit. 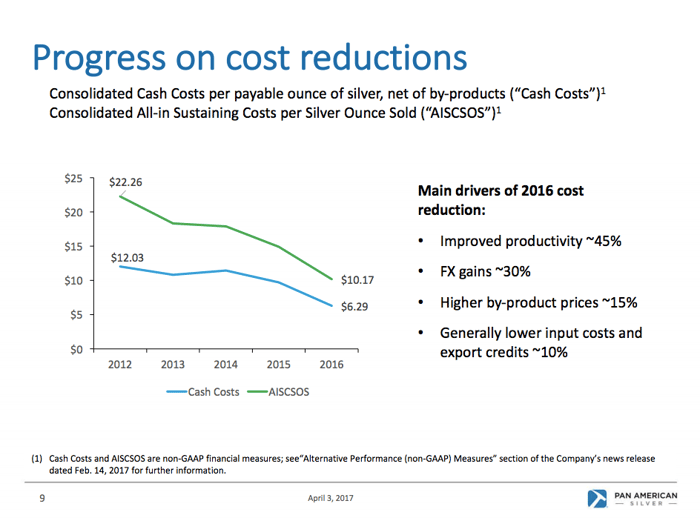 There's another subtle difference, here, too. Pan American Silver's long-term debt accounts for just 2.5% of its capital structure. That's a very low level, giving it plenty of leeway to afford its expansion plans. Coeur's debt makes up around 20% of its capital structure. That's not an outlandish number, and it's much better than it was just a year or so ago, but Pan American would likely be better able to handle another downturn in the precious metals space.

Getting while the "gettin" is good

In the end, Coeur is probably the better choice for investors today since the results of its refocusing efforts are showing up right now, as silver and gold prices are solidifying after a painful downturn. Pan American, while financially strong, isn't expecting notable production growth until a couple of years from now. Sure, Pan American would probably be better insulated from a precious metals downturn, but its growth plans basically miss the upturn that's taking place right now.