It's now fair to say that 2016 was a rough calendar year for Disney's (NYSE:DIS) parks and resorts business, as all six of its domestic theme parks suffered slight dips in attendance, according to the Themed Entertainment Association. Even Disney World's two water parks also suffered slight setbacks, so it went 0-for-8 across its gated attractions.

We're not talking about major declines. Outside of Disneyland's 1.8% dip, the other seven parks limited their declines to no more than 1%. However, before you write off the defections as a lack of thrill-seeking patrons, you may want to consider that Comcast (NASDAQ:CMCSA) saw attendance at all three of its stateside theme parks -- all within short drives of Disney's offerings -- move between 4.3% and 13.9% higher in the same report. Disney World's four parks combined for a decline of 307,000 guests last year. Universal Orlando's two parks gained a combined 983,000 visitors.

Disney's parks and resorts segment still experienced growth through the calendar year. The media giant is finding ways to make more with less. However, let's go over the reasons why Disney World's biggest rival -- Universal Orlando -- is eating Mickey Mouse's lunch in Florida. 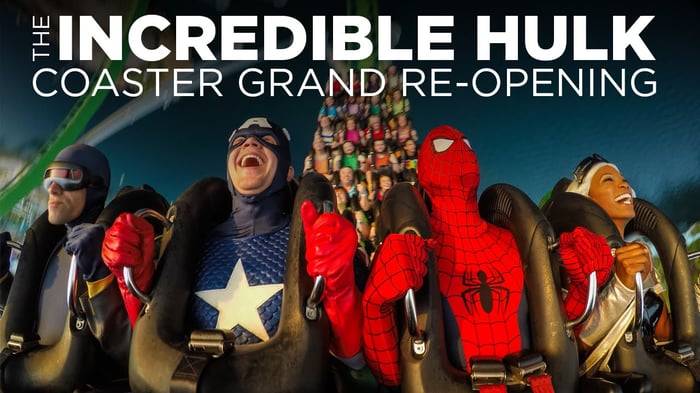 1. Momentum is in Comcast's corner

This isn't the first year that Universal Orlando has gained ground on Disney World. Comcast's resort has been trouncing its larger peer since the 2010 opening of The Wizarding World of Harry Potter at Islands of Adventure:

We've seen attendance at Universal's Islands of Adventure more than double since 2009, the last full year without the Potter infusion. Universal Studios Florida has benefited from the rebirth of its sister park, kicking things into an even higher gear when it added a Potter-themed expansion -- connecting both lands with a clever Hogwarts Express train ride -- in 2014.

Attendance declines at Disney World are rare, but there were headwinds in 2016. Latin American tourism in general and Brazil in particular plummeted, eating into what would've been even bigger growth at Universal Orlando.

2. Universal won the battle of newness

Stagnancy slays in the theme park industry: You need bar-raising rides and experiences to keep guests coming back. Disney didn't do enough last year. The only two major rides introduced at Disney World opened last June at Epcot, where the Soarin' flying simulator was updated with a new film so guests can glide past global landmarks, and the once iconic Maelstrom boat ride in the park's Norway pavilion reopened as Frozen Ever After. Neither ride apparently resonated with visitors, as Epcot's 0.7% decline was tied for the largest drop.

It was a different story at Universal Orlando, where the reopening of the Hulk roller coaster with an on-ride soundtrack, and the opening of Skull Island: Reign of Kong, helped deliver a 6.5% spike in turnstile clicks. Disney is going to come back strong in 2017 with last week's opening of Pandora -- The World of Avatar at Disney's Animal Kingdom, but phoning it in and neglecting most of its parks through 2016 wasn't enough.

3. Disney got greedy at the wrong time

Universal Orlando and Disney World routinely jack up prices for their single-day and annual passes. Disney has boosted its one-day tickets for 29 consecutive years. However, the House of Mouse may have pushed its luck last year when it introduced demand-based pricing. Instead of sticking to a single price, Disney's springtime move last year to divide its operating calendar into three periods -- and jacking up its prices by as much as 18% during peak summer and holiday seasons -- probably scared away cost-sensitive families who can only travel during peak season.

Disney's shift in late 2015 to revamp its annual pass offerings also didn't help with last year's attendance, as passes without restrictions got a lot more expensive. Universal Orlando was no slouch on that front, but as the park with momentum and head-turning additions, its big spike in prices was at least justified. Disney World got more expensive just because it was Disney, and as it painfully found out last year, being Disney is no longer enough.