Please ensure Javascript is enabled for purposes of website accessibility
Log In Help Join The Motley Fool
Free Article Join Over 1 Million Premium Members And Get More In-Depth Stock Guidance and Research
By Rick Munarriz – Feb 28, 2016 at 10:54AM

The leading theme-park operator dramatically jacks up its ticket prices, as it shifts to a dynamic pricing model. 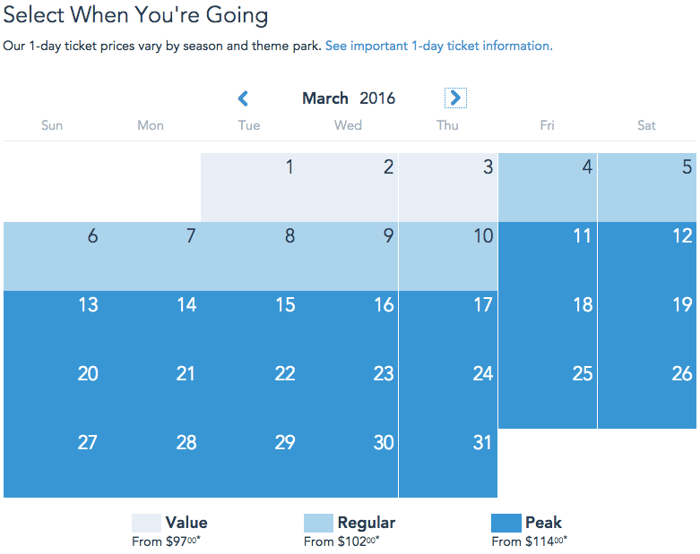 It now costs as much as $124 for a day at the Magic Kingdom! Are you kidding me?

Disney raising prices isn't new. It has now upped its single-day admissions for 28 years in a row. The timing of the increase also isn't a surprise. It pushed its rates higher in late February -- and on a Sunday -- in each of the three previous years. I warned you three different times that the move was likely coming, suggesting that you lock up any single-day ticket purchases earlier this month.

However, this is shaping up to be Disney's most aggressive annual price hike because it's shifting to a tiered pricing model based on season demand. If you want a one-day ticket to Disney World for a visit between now and Thursday it will cost you the same price -- $105 for the Magic Kingdom and $97 for either EPCOT, Animal Kingdom, or Disney's Hollywood Studios. However, come Friday the ticket prices will go to $110 for the iconic Magic Kingdom park and $102 for Disney's three other gated attractions. A week after that, spring break pricing goes into effect with folks paying $124 for a day at the Magic Kingdom and $114 for the other three destinations.

Guests will see all three pricing tiers in effect next month, and you already know that theme park buffs will be gravitating to the new peak pricing. That's understandable, since a day at the world's most visited theme park -- the Magic Kingdom -- is about to become 18.1% more expensive during peak season. The other three parks will be 17.5% more costly than before.

The new peak season covers most of the summer and all of the major holiday weekends. In short, it will be a lot more expensive to visit Disney World when most families are actually able to go. Yes, the non-peak pricing remains the same, but there was always the hope that Disney would actually reduce the prices for value season to give locals a shot at a weekend of fun. Disneyland did exactly that this morning.

Universal Orlando parent Comcast (CMCSA 0.15%) (NASDAQ: CMCSK) boosted its one-day prices earlier this month, so it's not as if one can call Disney greedy. Comcast and Disney have been experiencing record attendance numbers, and obviously they will continue to keep jacking up prices until folks stop paying them. Disney also isn't the first theme park to shift to a demand-pricing model. Comcast is doing this with Universal Studios Hollywood ahead of April's highly anticipated opening of the Wizarding World of Harry Potter -- an expansion that has seen turnstile clicks skyrocket at its sister resort in Florida. It was also all but expected after Disney revamped its annual pass plans late last year, making it more expensive for regulars to access Disney World during seasonally potent travel periods.

However, you can't help but wonder if Disney is doing the right thing with a one-day ticket hike of as much as 18% at a time when a few of its theme parks are in awkward states of metamorphosis. Disney's Hollywood Studios is in the process of being gutted as it makes way for Toy Story Land and Star Wars that are several years away from becoming a reality. Animal Kingdom and Epcot have new rides and attractions in the works, but the increase is going to be played up as insensitive by the media, theme park blogs, and your social media feed.

Throw in the confusion of having to pre-select which of the three pricing periods will be in effect when you will be visiting and it's easy to imagine some folks taking a pass on visiting Disney World in the coming months. They'll just wait for Star Wars Land.

Disney stands to make a lot of money if this pans out. It will be a substantial uptick in revenue -- and an even more dramatic spike in profitability -- if consumers don't flinch at the move. That makes this a big gamble for Disney, but one with a potentially juicy payoff for investors that will come at the expense of the pocketbooks of its patrons. It's a small, small world with a big, big price hike.