This could be the start of a beautiful franchise for Time Warner's Warner Bros.

Wonder Woman not only dominated this past weekend's box office -- it set a new record. Making its big-screen debut, the movie collected roughly $103 million in domestic ticket sales, making it the all-time highest-grossing opening weekend for a film directed by a woman (Patty Jenkins, in this case). 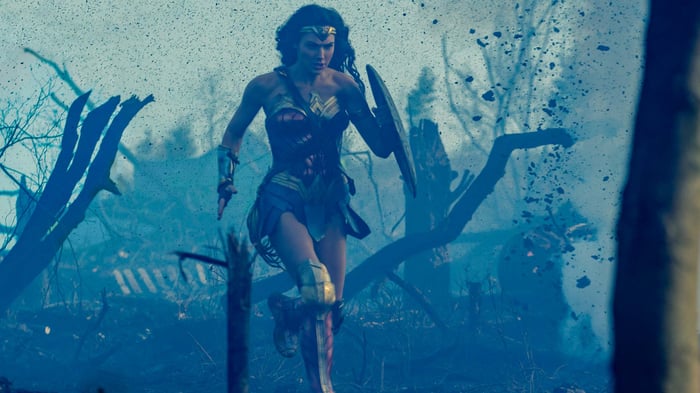 In (distant) second place for the weekend was another debut, the animated superhero comedy Captain Underpants. The film, from Comcast's (CMCSA 0.98%) busy DreamWorks Animation, raked in around $23.5 million on the U.S. market.

Behind that was the latest installment in the Walt Disney (DIS 2.28%) criminals-of-the-sea franchise Pirates of the Caribbean: Dead Men Tell No Tales. In the United States, the movie grossed just under $22 million.

In terms of movie studios, the weekend's clear winner was Warner Bros./Time Warner. Film pundits expected Wonder Woman to do well, but not this well: Over $100 million is a smashing success, even for a big-budget superhero franchise movie. And speaking of franchises, it looks like this iteration of everyone's favorite action female could be the start of a very long and lucrative series for the Time Warner unit.

Although Captain Underpants and Pirates of the Caribbean: Dead Men Tell No Tales took the No. 2 and No. 3 slots, their respective performances weren't necessarily encouraging for Comcast and Disney shareholders. The former recorded one of the weakest openings for a DreamWorks title, while the latter's gross dropped a steep 66% from its opening last weekend.