CBS announced it reached 5 million OTT subscribers about evenly split between Showtime and CBS All Access. That's up from about 3 million a year ago. CBS CFO Joe Ianniello said CBS is ahead of its plans to reach 8 million subscribers between the two services by 2020.

HBO, meanwhile, just posted its best year ever, adding about 3 million new subscribers to HBO Now. That's three times as many net additions as either Showtime or All Access while charging a higher price. Investors need to understand where the discrepancy comes from and how it might impact CBS going forward. 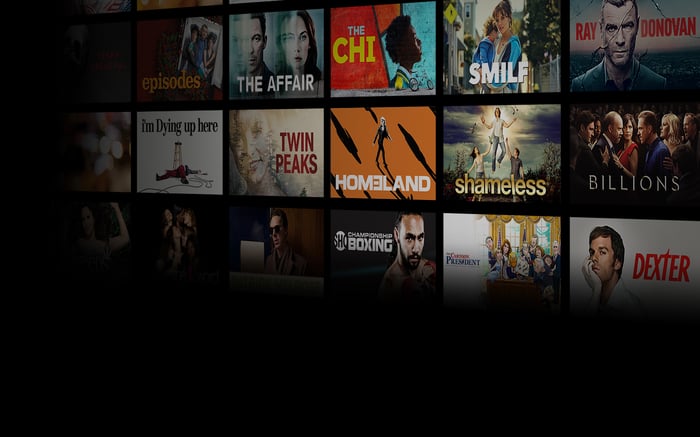 Still relying on the bundle

Both CBS and HBO's better-than-expected results stem from the secular growth of over-the-top streaming.

Virtual multichannel video programming distributors (MVPDs) grew significantly in 2017 while cord-cutting continued to accelerate. These virtual MVPDs use the OTT alternatives to HBO and Showtime to make distribution easier; HBO and CBS handle delivering content to subscribers, saving the video distributor some money. As such, HBO and CBS get to keep a larger share of revenue.

CBS has also been bundling Showtime and CBS All Access with other streaming services. You can bundle Showtime with Hulu, Amazon Prime, or even with CBS All Access. HBO also has a partnership with Amazon. HBO Now gets about half of its subscribers from Amazon Prime Channels, while Showtime gets the vast majority of its subscribers through Prime Channels and Hulu bundles, according to BTIG analyst Rich Greenfield.

HBO got an additional boost last year when AT&T opted to bundle HBO with its unlimited wireless data plans. If a subscriber didn't have a pay-TV subscription from one of AT&T's services, they could take HBO Now.

Both companies have historically relied on the cable bundle for distribution, and they're still relying on others to help distribute their products in an over-the-top world.

The strength to stand alone

HBO has considerable brand strength to support it in a stand-alone world. As more and more consumers cut the cord, it's not clear Showtime will show the same resilience.

In 2017, HBO added 5 million domestic subscribers between HBO and Cinemax with the vast majority of those new subscribers coming for HBO.Meanwhile, CBS doesn't provide an update on its Showtime subscriber growth, and a change in how it counts subscribers obfuscates its progress. The count for CBS' premium cable networks was decreasing through midyear, but management said specifically that Showtime subscribers increased this year -- surpassing 25 million for the first time -- without providing any other details.

It seems that HBO has more strength to survive as a stand-alone service. Even if it relies on other distributors and bundles, HBO is growing faster than ever thanks largely to the strength of its brand and product.

As more people cut the cord and leave traditional cable bundles, it seems as though CBS and Showtime will have a more difficult time building a robust base. Although OTT subscribers may not be enough to offset those losses, it's not necessarily a harbinger of doom, either. CBS keeps more revenue from OTT subscribers than one signing up through a distributor, and the increased revenue share may help lessen the blow of decreasing overall subscriber counts. But whether that will be enough to make Showtime a successful stand-alone product long term remains to be seen.

Here's Why Nobody Cares About Time Warner’s Earnings