Several automakers are planning on a hydrogen-car revolution, but the global scarcity of platinum could prove difficult to overcome.

The expected rise of electric vehicles has led to quite a few headlines in recent years predicting the collapse of platinum. That's because it puts the "catalyst" in "catalytic converter" -- literally. Half of global production is used to convert harmful pollutants from internal combustion engines, such as ground-level ozone and carbon monoxide, into less harmful emissions. Therefore, the rise of electric vehicles will come at the cost of platinum's largest market, or so the thinking goes.

But materials scientists are worried about the exact opposite problem: the world not having enough platinum. That's because several automakers are planning on launching hydrogen fuel-cell vehicles as a key part of their fleet, with Toyota (TM -0.64%) going all-in on a potential hydrogen economy. Residents of California can buy the Toyota Mirai today -- and get three years of free fuel to boot. Likewise, Honda (HMC) has begun selling its Clarity Fuel Cell model in the United States.

One problem: Hydrogen fuel cells require significantly more catalytic material than gasoline or diesel vehicles. Rather than converting pollutants, catalysts in fuel cells are responsible for kick-starting the all-important energy-producing hydrogen reaction itself. And that catalytic material happens to be platinum. Will the scarcity of this valuable metal doom the hydrogen car revolution before it begins? 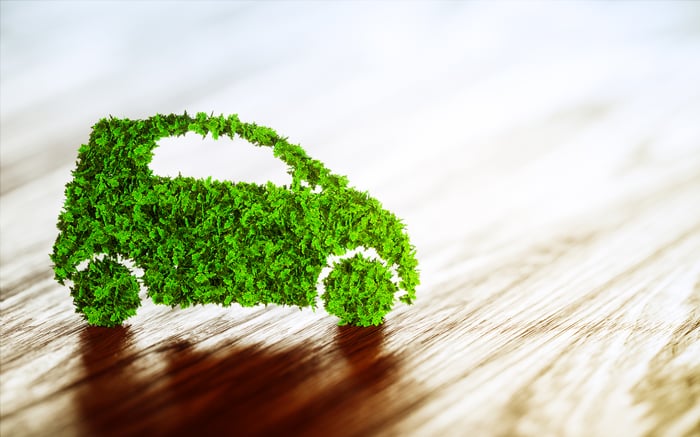 First, a technicality: While the single element platinum gets all the glory for being the king of catalysts, the correct term is actually "platinum group metals" (PGMs), which mainly refers to platinum, palladium, and rhodium. Each is relatively rare, but palladium is the least expensive and performs well enough for most applications. Today, palladium comprises about 89% of the PGMs in catalytic converters, with the balance being split evenly between platinum and rhodium.

So what quantity of PGMs is used in vehicles today? The U.S. Department of Energy (DOE) estimates that roughly 6 grams of PGMs will be used in the average gasoline-powered light-duty vehicle in 2020. Meanwhile, the DOE has a goal to reduce the amount of PGMs used in hydrogen fuel cells to 0.09 grams per horsepower by 2020. One gram is roughly equivalent to the mass of a small paper clip, so these numbers are hardly impressive on their own. But it's all relative.

Consider that a Toyota Mirai is rated at 151 hp. That means each Mirai will require about 14 grams of PGMs if the DOE end-of-decade target is achieved. That's much more than the average gasoline-powered vehicle. Here's how it stacks up, and what other popular cars would require if they were powered by hydrogen using today's technology:

To be fair, Toyota engineers have made several impressive advances in fuel-cell technology that should allow the company to reduce the amount of PGMs required for its hydrogen-vehicle platform, and eventually lead to more powerful engines (it has even opened up its patent portfolio). But without truly incredible improvements, the hydrogen-car revolution faces nearly insurmountable hurdles.

Enough to go around?

The production of PGMs is perhaps the largest obstacle. Consider that PGM production is measured in kilograms, not metric tons like most materials. In 2016 nearly 380,000 kilograms of platinum and palladium were mined globally -- roughly the mass of two blue whales. That's it. Another 125,000 kilograms were recycled from scrap metal (totaling three blue whales, if you want to get cocky).

PGMs are so rare and difficult to mine that even though the United States has the fourth-largest reserves in the world and is the fifth-largest producer, it created 227% more PGMs from scrap and recycling than from new ore. All domestic production currently comes from just two mines in Montana owned by Sibanye Gold, a South African company.

Moreover, since many PGMs are mined as byproducts of other metals (one-third of global production comes from nickel mining), "simply increasing production" is not easy nor without severe consequences for the prices of other metals.

Here's a fun example to illustrate the difficulty facing a hydrogen-car revolution, just from a PGM point of view. What would it take to replace all cars on U.S. roads with a 151 hp Toyota Mirai? Consider:

I even assumed that all cars on the road today are scrapped within the next 10 years to unlock their PGMs. Even in that generous scenario, if the United States took the entire world's production of PGMs dedicated to automobiles and only built a Toyota Mirai or its equivalent, then it would take nearly 11 years to turn over the entire domestic fleet. That would come at the expense of the world's remaining 750 million cars (and counting).

The scarcity of platinum and its associated metals poses a significant hurdle for global automakers investing heavily in hydrogen fuel-cell technologies -- and that's far from the only obstacle. The cost, durability, and lifetime of fuel-cell systems today won't allow for mass commercialization. Storage technologies and hydrogen-fueling infrastructure are also critically lacking.

While these and other challenges could be overcome with feats of engineering and vast sums of money invested over decades (such as the fuel-cell manufacturing joint venture between Honda and General Motors), the hydrogen-car revolution seems pretty unrealistic from where things stand today.