Sales of electric vehicles continue to grow in the U.S. and around the world, as battery ranges improve and costs continue to come down. But one technology that hasn't made its way to mainstream EVs is solar energy. It's been more than five years since Ford (NYSE:F) and SunPower (NASDAQ:SPWR) first demonstrated putting solar cells on a vehicle, in the C-MAX Solar Energi Concept. But there hasn't been much progress since then.

Three years ago, Elon Musk tweeted that solar would "probably" eventually be an option on Tesla vehicles, which made sense given the solar and EV manufacturing the company has under one roof. Nissan has built a small number of solar cells into the spoiler of the vehicle in some models, but those will only power accessories, not the drivetrain.

Toyota (NYSE:TM) has actually gone farthest, using a small solar system on the roof of the Prius Prime, but that's only available in Japan and Europe. Now, there's at least a test of a solar system that may add real driving range for EV owners, the best hope we've had for solar EVs in years. 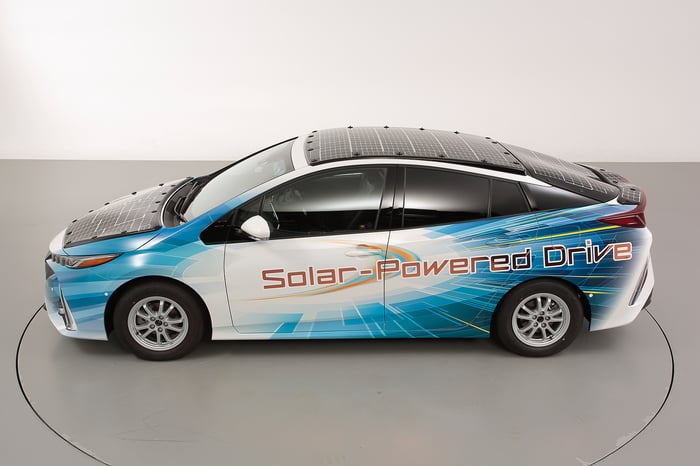 Over the July 4 weekend in the U.S., Toyota announced a new 860-watt solar-powered Prius it will demo in Japan. As shown above, the vehicle has solar panels covering the entire roof and hood, maximizing solar energy production. It's also using over-34%-efficient solar cells from Sharp, originally designed for the New Energy and Industrial Technology Development Organization (NEDO).

The power provided is a significant improvement from much smaller systems that have been used on solar vehicles. The Prius Prime has just 180 watts of solar power onboard, and the Ford-SunPower C-MAX Solar Energi concept car had 350 watts at most.

With the increased power, Toyota says the solar cells could increase range by 35 miles while driving. Even if that's in the right ballpark, it could be a game changer for solar electric vehicles.

Why solar isn't on all EVs yet

It isn't as if companies haven't wanted to include solar on EVs, but it's easier said than done. Toyota's Prius solar roof isn't available in the U.S. because it hasn't passed safety tests. Ford, Nissan, and Toyota haven't commented on why they aren't adding solar, but we know there are engineering challenges with crash tests, heating from solar cells, and the integration of power generation into a vehicle. These aren't trivial challenges, and can take years to overcome. They likely fall behind higher engineering priorities, like increasing battery density or improving charging time.

Solar cells themselves also aren't very conducive to vehicle design. Most cells don't easily curve, and the most efficient cells are built using silicon wafers, creating the patchwork construction you see in the photo. Today's technology is a long way from solar paint or printing that could easily be incorporated into a traditional vehicle's design.

What should be worth watching is whether these solar products ever make their way to showrooms and thence into people's driveways. EVs are less expensive to operate than traditional vehicles, so if the industry can add onboard fuel production, it would change transportation forever.

The next revolution in energy

It makes all the sense in the world for vehicles to eventually be wrapped in solar cells. The cells themselves would be a relatively low-cost addition if the technical challenges can be overcome. And the added energy could power one-fifth or more of an EV's range.

For now, that's still a dream of solar and EV enthusiasts. But after five years of hype, we may be getting closer to a solar EV solution. And it may be Toyota that leads the way.