A lot of progress is being made on understanding how marijuana's chemical cannabinoids can be used as medicine, and among the most intriguing of these cannabinoids is cannabidiol, or CBD. It's one of at least 113 active cannabinoids found in marijuana, it's not responsible for marijuana's "high," and it accounts for roughly 40% of the marijuana plant's extract.

At the forefront of research into CBD's use as medicine is GW Pharmaceuticals (NASDAQ:GWPH), a U.K. drug developer that already markets a tetrahydrocannabinol (THC)-derived drug in Europe for the treatment of muscle spasms in multiple sclerosis patients. 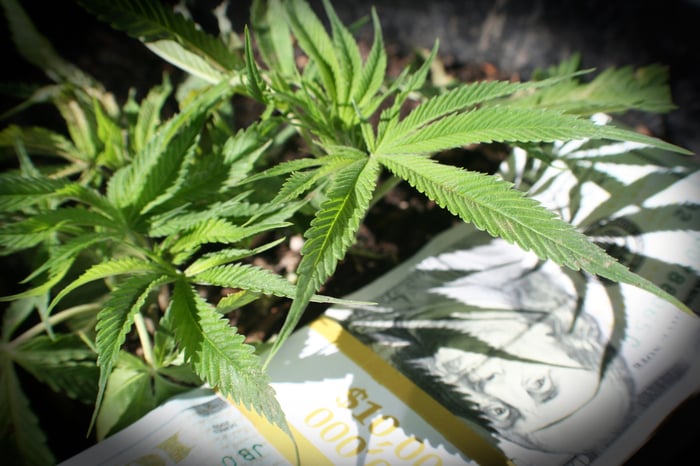 GW Pharmaceuticals' findings support anecdotal evidence that CBD heavy marijuana strains and oils provide relief to epilepsy patients. Perhaps the most famous of these high CBD strains is Charlotte's Web, which has extremely low THC content (0.3%), and was named after the childhood epilepsy patient it was created to help.

Tapping into a billion-dollar market opportunity

Epidiolex isn't commercially available yet, but it could be within a year. GW Pharmaceuticals hopes to file for Food and Drug Administration approval of Epidiolex soon, and an official decision would come within 10 months of that filing.

If Epidiolex wins a regulatory green light, it will offer advantages to doctors and patients over CBD heavy marijuana strains and oils. While Epidiolex has been scientifically proven to work, the same rigorous proof isn't available for CBD products like Charlotte's Web that are sold at dispensaries. If Epidiolex is approved, it will be available nationally, regardless of each state's laws, and that means it skirts risks associated with a federal crackdown on marijuana dispensaries by Washington. Furthermore, an FDA blessing would likely convince doctors who are otherwise hesitant to recommend medical marijuana to prescribe it.

Initially, GW Pharmaceuticals plans for between 50 to 60 sales people to target between 4,000 to 5,000 U.S. physicians who commonly prescribe anti-epileptics, and there's evidence suggesting it has a good shot at becoming a top-selling medicine.

According to Matt Karnes, founder of GreenWave Advisors, a marijuana industry research firm, predicts CBD sales in the U.S. will reach $3 billion in 2021. Furthermore, the epilepsy prescription drug market is already worth billions of dollars annually, yet over one-third of the 470,000 patients with childhood epilepsy have their disease inadequately controlled by existing anti-epileptic drugs. Since Epidiolex's efficacy is based on its use in patients who were heavily pretreated with existing medications that failed to control their seizures, it could become a standard of care and someday generate sales of at least nine figures per year.

Ultimately, the trial results appear solid enough to win a go-ahead, but there's no guarantee of FDA approval. Also, how much of the CBD market Epidiolex wins will depend a lot on its pricing relative to CBD capsules and oils and on whether health insurance agrees to pay for it. The potential to shake up this market is big enough, though, to make this one marijuana stock worth watching.