The onshore rig industry is in the middle of an interesting time. While drilling activity has grown at a staggering pace over the past few quarters, most rig companies haven't been able to translate that demand into bottom line results. This past quarter, Nabors Industries (NYSE:NBR) results were a perfect example of higher demand but lower than expected earnings.

According to Nabors' management, though, this won't be a problem for much longer. Here are several quotes from Nabors' most recent conference call where management explains why this was the case last quarter and the steps it has taken in response to the situation. 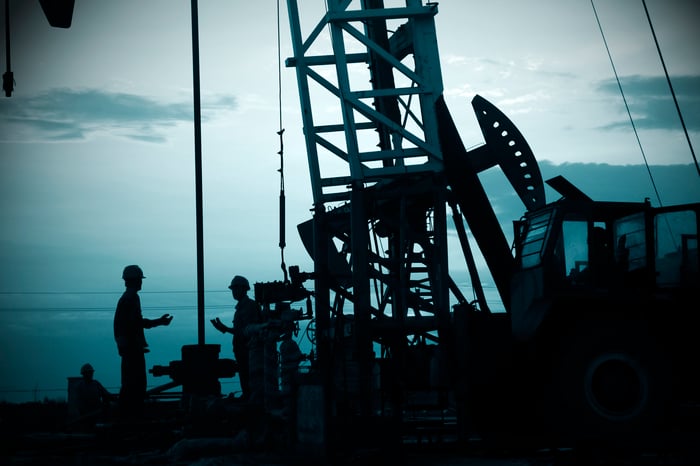 In his opening remarks, CEO Anthony Petrello didn't try to sugarcoat the company's most recent earnings results. While first-quarter earnings were higher than the prior quarter, they were well below expectations.

First, let me start by saying that the financial results of the first quarter did not meet our expectations. As we noted at an industry conference a month ago, we had 2 issues that impacted our results. The first one, related to reactivating approximately 20 rigs in the Lower 48. The second, the structural work on rigs in a key international market. This quarter's results do not reflect the success we've had throughout the downturn at reducing and controlling costs. They also do not reflect the progress we've made deploying our SmartRigs in the Lower 48 or increasing our drilling rig count in certain high-margin international markets.

I will elaborate on the specifics later in the call, but what's important to know is that the majority of these cost items are related to specific issues that will largely be put behind us. We are executing our plans to reduce and eliminate many of these expenses while continuing to grow activity and roll to higher day rates. With this execution, we expect steadily improving results, both in the U.S. and internationally, throughout the remainder of 2017.

Nabors isn't the only rig company that reported higher than usual costs this past quarter, so this isn't unique to Nabors. The question is how management responds to the situation.

The good stuff is going back to work

There has been a rather interesting bifurcation in the rig market over the past year. Producers that are electing to take on rigs are only employing the highest specification rigs because they tend to generate better well economics and contract rates for top quality rigs are still reasonable. According to Petrello, this has been good for business because it has allowed the company to deploy all of its top-shelf rigs.

Our highest specification rigs continue to work at full utilization. Our upgraded rigs have all immediately commenced work upon completion of their enhancement projects. Operators are realizing benefits from the efficiencies and consistent performance of our SmartRig operating system. We expect to have another 27 upgraded rigs ready to go to work over the next few quarters, along with 7 previously announced new builds yet to be completed for a total of 100 SmartRigs at the end of the year. We had 1 new-build PACE-X800 rig start on contract this month after commencing operations with 2 new build PACE-M800 rigs in the first quarter.

The one stain here is that Nabors' highest specification rigs still only represent a rather small portion of the fleet. Petrello also said that utilization rates for the quarter were just 29%. If more of its available rigs are easily upgradeable, though, that could make the situation much better.

One underappreciated aspect of the rig business is that rigs need to be in the right place. According to Petrello, the geographic mix of the company's assets wasn't ideal in prior quarters and some of Nabors' higher than usual costs related to moving rigs around to the places they need to be.

The regions of growth did not match the footprint of our existing fleet. The Permian, SCOOP and to a lesser extent, East Texas drove an outside share of growth. With moderate growth in the Bakken at that time, we opted to relocate multiple rigs from there and the Marcellus to Texas. Now with Bakken demand solidly on the upswing, we have an optimized, regionally balanced fleet, and do not plan to relocate additional rigs. These changes, combined with the larger overall working fleet, should result in declining per rig expenses in the Lower 48 beginning with the second quarter.

This should help to put more of its rigs to work and raise that utilization rate to a more respectable level. Drilling in the Permian continues to go strong, so these rigs should be able to find work relatively soon.

Potential to expand margins faster than others

To sign long term contracts or not to sign term contracts, that is the question for rig companies right now. With demand on the rise, there is the temptation to lock in customers to long-term drilling contracts to ensure steady revenue and cash flow for several quarters down the road. On the other hand, rig companies can sign off on spot rate work that gives the company a chance at higher rates and better margins down the road if demand continues to increase. According to Petrello, Nabors is taking the latter strategy for now.

I think the point we probably didn't make sufficiently clear that you're -- that you've uncovered here is that the average day rate of [the] portfolio is less than the spot of the contracts we're now signing. So that, by itself, means that, that's going to start to drive up our margins. And in terms of where those new contracts are, about 75% of our contracts are either well-to-well or expire in next 6 months, and therefore, gives us great opportunity to do that. We are not locking in rates.

If drilling activity continues to rise -- which means that oil prices remain either steady or rise -- then putting rigs on spot contracts is a good idea. If the market starts to plateau or even decline as some analysts suggest, though, then this could be a risky bet.

Late last year, Nabors signed a joint-venture deal with Saudi Aramco to combine their rig fleets in the Kingdom. The benefit for Nabors is that it likely gets the first call when Aramco wants to drill new wells, and the Kingdom's plan to grow natural gas production means that Nabors has an opportunity to add several rigs to the joint-venture fleet.

As promising as this may be for Nabors' international operations, Petrello was asked if this meant that its results wouldn't be impacted by OPEC cuts or other production decisions from Aramco. Petrello certainly doesn't think that is the case.

[W]e're obviously not immune to the cut. And we're going to be sent ashore of the same market forces, and it's up to us to do a great job, show them the value that in a downturn we're still producing. So there's certainly no underlying security from cuts -- from effect of the OPEC cut from the structure. But as I said, having them at the table as a partner I think is very useful.

No deal is going to make a company's results completely insulated from major decisions like OPEC cuts, but that isn't the objective of this deal, anyway. Long term, the success of this joint venture will be if Nabors can increase profitability in its international operations and allocate a larger portion of the fleet to the Kingdom.