Arriving at the two best dividend stocks in the cruise-line industry isn't a Herculean task -- only a handful of cruise lines are publicly traded. Out of these, high-seas stalwart Norwegian Cruise Lines (NYSE:NCLH) doesn't offer a dividend, nor does tiny Lindblad Expeditions (NASDAQ:LIND), which operates educational cruises under a strategic alliance with National Geographic.

You may increasingly hear Walt Disney Company (NYSE:DIS) mentioned as a member of the cruise industry. Disney wants to expand its ocean presence significantly; it's ordered two 135,000-ton ships for delivery in 2021 and 2023. But even after these deliveries, Disney will operate a small fleet of just six ships. So, relative to the company's total annual revenue of $55.6 billion, an investor in Disney won't get much exposure to the cruise revenue.

This leaves us with Carnival Corp. (NYSE:CCL) and Royal Caribbean Cruises Ltd. (NYSE:RCL). With annual revenue of $16.4 billion and $8.5 billion respectively, Carnival and Royal Caribbean are the two largest global cruise-ship operators, and the only two pure-play cruise companies to pay a dividend.

Dominant organizations in a growing industry 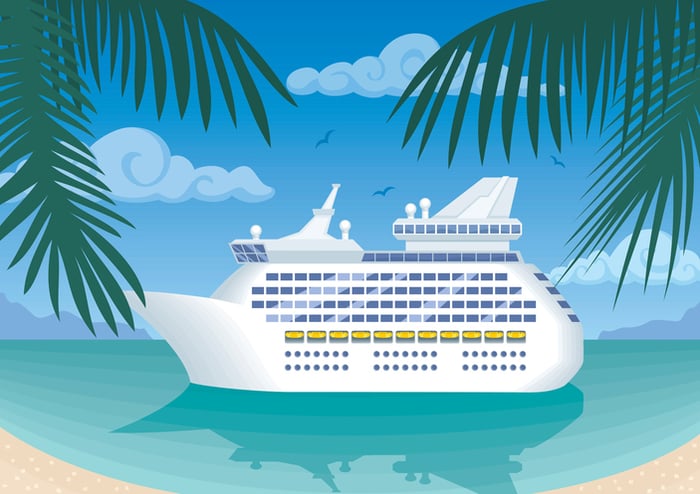 According to the Cruise Lines International Association, the global cruise line industry will service 25.8 million passengers in 2017. That would represent a 4.5% increase over 2016, and it's in line with the compound annual growth rate of 4.75% the industry has posted since 2009.

In addition to steady market expansion, demographic trends also favor the cruise industry. In its 2016 annual report, Carnival pointed out that two huge groups are increasingly disposed toward leisure travel: baby boomers and millennials. Baby boomers generally have higher disposable income to spend on cruise vacations, while millennials, though earlier on in their careers, have shown an inclination to spend on experiences rather than on material goods.

Both companies are aggressively expanding beyond core North American and European passenger bases. Royal Caribbean points to China in particular as crucial to its future profitability and growth, as a burgeoning Chinese middle class is expected to help absorb new passenger capacity in the coming years. For its part, Carnival expects a full 6% of its 2017 capacity to be deployed in China, as it stretches its China-based fleet from six to nine ships by year's end.

As for profit, the peers enjoy nearly identical operating margins of approximately 18%, and, for participating in a capital-intensive industry, both also have manageable debt loads. Carnival carries a trailing-12-month debt-to-EBITDA ratio of approximately 2.0; comparatively, Royal Caribbean's ratio hovers around 3.5. Both readings exhibit moderate leverage.

Carnival and Royal Caribbean are improving revenue per passenger as well. Carnival recently raised its expectations for net revenue yield (i.e., net revenue divided by total available passenger cruise days) for 2017, projecting a year-over-year increase of 3%, versus the 2.5% forecast back in December. In its most recent quarter, Royal Caribbean also raised its net yield expansion forecast, projecting a range of between 4.5% and 6%, versus an earlier projected increase of 4% to 6%.

After holding its dividend steady at $0.25 per quarter in 2013 and 2014, Carnival has raised its quarterly dividend by $0.05 in each of the past three years. Currently, the cruise line's dividend yields 2.2%. Better yet, Carnival boasts an extremely healthy payout ratio of just under 28%.

Like Carnival, Royal Caribbean doesn't own an extremely long dividend increase streak -- it's bumped its payouts consecutively only since 2012. But in those six years of increases (which include the current year), Royal Caribbean has inflated its quarterly payout almost fivefold, from $0.10 to $0.48 per share. Royal Caribbean's dividend now generates a yield of 1.7%, and its payout ratio is even lower than Carnival's, at 20.5%.

In closing, these leading cruise operators would be solid portfolio choices even if they didn't issue checks to shareholders. But I'll leave you with an example of the power of regular income distributions to shareholders.

Take a peek at Carnival's price performance against competitor Norwegian Cruise Lines over the past three years: 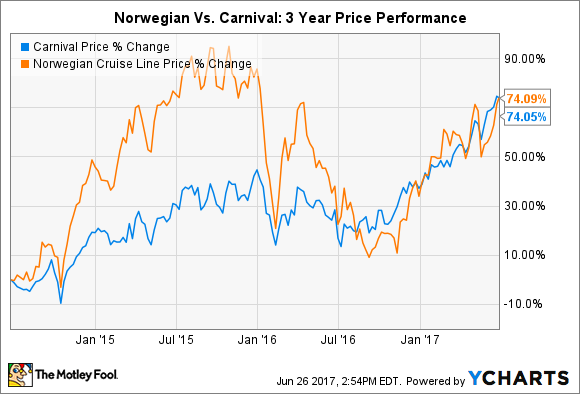 Now let's run that tape again, adding in dividends paid and comparing their total return prices over the same period: 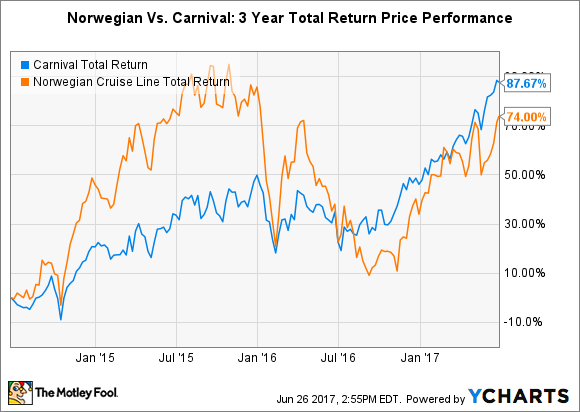 As we noted at the outset, Norwegian's dividend is, well, zilch. Between the two companies, Carnival's payouts have made all the difference over the last three years. And as the chart also reminds us, whether you buy Carnival or Royal Caribbean, or both, don't forget to reinvest those dividends.