Emerson Electric Co. is the type of company around which you build a portfolio. Here are three really bad reasons to sell it today.

Emerson Electric Co. (EMR 0.59%) doesn't have the same name cachet as General Electric (GE -0.43%), but if you're a dividend investor, it should. In fact, even if you aren't a dividend investor, Emerson is a great company to have as a cornerstone of your portfolio. Yes, the industrial sector has faced headwinds of late, resulting in material corporate makeovers throughout the industry. But Emerson is still standing strong, as is its dividend. Here, then, are three terrible reasons to sell this company.

1. That was a mistake

One of the things you hate to see at any company is a big investment that goes wrong. In the case of Emerson, that investment was its decision to build a division dedicated to serving data centers. The process started around 2000, with multiple acquisitions used to bulk the business up over the years. At the end of 2015, the network power group accounted for 22% of Emerson's revenue. 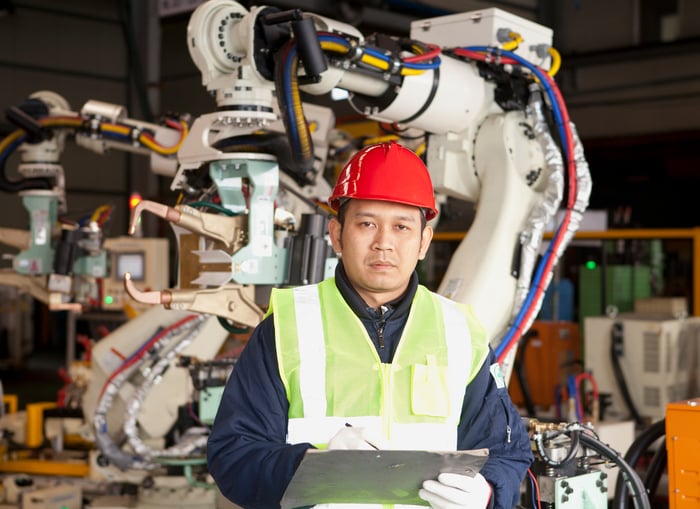 It's not unusual for an industrial giant like Emerson to build up a business to adjust to a changing environment. For example, with financial services taking off in the late 1990s and the early part of the 2000s, General Electric made the decision to expand its finance arm. In fact, if you combined GE's commercial finance and GE Money divisions, finance made up 35.5% of its segment profits in 2007 -- second only to its infrastructure division.

Neither Emerson's nor GE's choices worked out well. For Emerson, the margins in the network power group lagged those of its other businesses, and it chose to sell the division. In the case of GE, well, the 2007-to-2009 financial-led recession resulted in a series of unfortunate events and the eventual decision to get out of the finance business, except as a means to support sales of GE products. Both companies survived these choices (more on this in a moment), but it would be understandable for investors to feel a little concerned about the decisions coming out of management.

That would be a mistake in Emerson's case. The company moved into an area that it hoped would be highly profitable, and it didn't pan out as expected. If it didn't try new things, and occasionally fail, the more than 100-year-old company wouldn't be around today. So don't get too caught up on the misstep. It's just a blip when you look at the long-term picture here.

That brings up the dividend. Dividend growth over the past year at Emerson was a measly 1.1%. That doesn't keep up with the historical rate of inflation, which is around 3%. That's a problem over the long term, though slowing the dividend's growth while the company is reworking its business a little makes sense. Note, too, that sales have been under pressure of late because of a slow industrial market. Underlying sales, excluding discontinued operations, slid 6% in 2016.

But here's the thing: Emerson has increased its dividend every year for six decades. One year's percentage increase isn't a make-or-break number. In fact, even with the small increase over the last year, Emerson's 10-year average increase of 7.4% is still more than twice the historical rate of inflation. The company deserves a little leeway here. 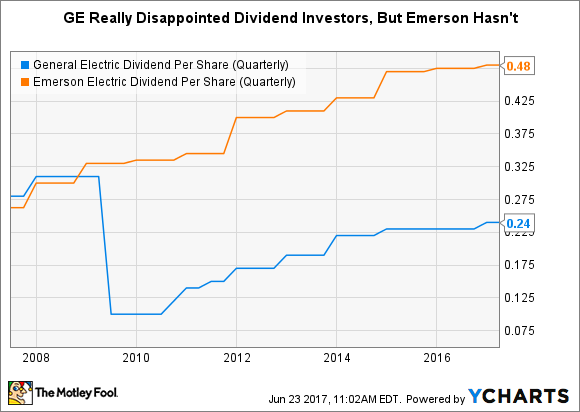 And despite selling off the network power business, Emerson's streak didn't come to an end. GE had a nice dividend record up until the 2007-to-2009 recession, when troubles with the company's finance arm led to a dividend cut, among other things -- like a government bailout. That puts a very different perspective on Emerson's meager dividend growth and its choice to jettison the network power operations.

The last bad reason to sell Emerson is valuation. Now, to be fair, the global industrial giant is not cheap today. For example, the P/E is around 23, versus a five-year average of around 19. And the company's price-to-sales ratio is 2.6, compared with a five-year average of 1.7. The stock price, meanwhile, is up by a huge 37% since hitting a low point in mid-January 2016. That beats the S&P's 30% gain over the same span. 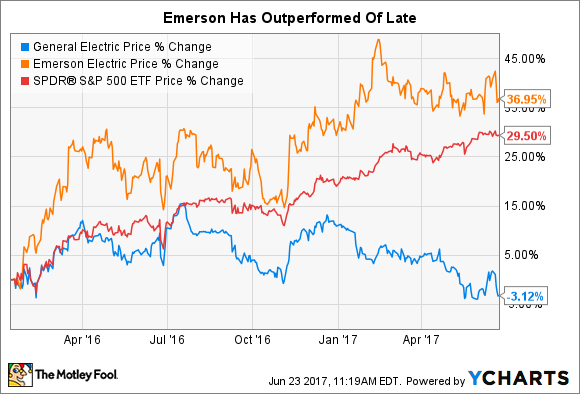 But Emerson is a stock that you buy and hold for a long time, not a name you should be trading in and out of based on short-term valuation metrics. So it's not cheap right now, but it's a great company that's proved itself over time. Unless you have another great company with a 60-year history of annual dividend increases that you know is cheap right now, selling Emerson and its 3.2% dividend yield would be a mistake. (For reference, the S&P yields around 2%.) Maybe you hold off on buying more, but selling would be an error in judgment.

Emerson is a bit expensive, it clearly made a mistake with its network power division, and dividend growth has been slow lately. If you count this industrial giant as a core holding, you should just roll with each of these issues. Over the long term, they will all look a lot less meaningful than they do today. And that makes each a really terrible reason to sell Emerson Electric Co.