The industrial giant is up roughly 30% since early 2016. Should you book your profits and run?

Emerson Electric Co (EMR 0.29%) shares have had a really good run since hitting a low in early 2016, with the price since that point advancing by around 30% -- outdistancing the S&P 500 index by nearly 10 percentage points. With some market-watchers worried that stock prices are elevated, is it time to move on from this global leader in the industrial industry now that it's had such a good run?

If you're a short-term investor, I would lock in the impressive gains Emerson's shares have put up over the past year and a half or so. That's the easy call, since the benefits from some of the big changes that have taken place over the past 18 months are likely priced into the stock, to some extent. However, if you have a long-term focus, you'll want to think about the changes at Emerson and what impact they might have on the company's long-term future. Do that, and you might want to stick around. Here's why. 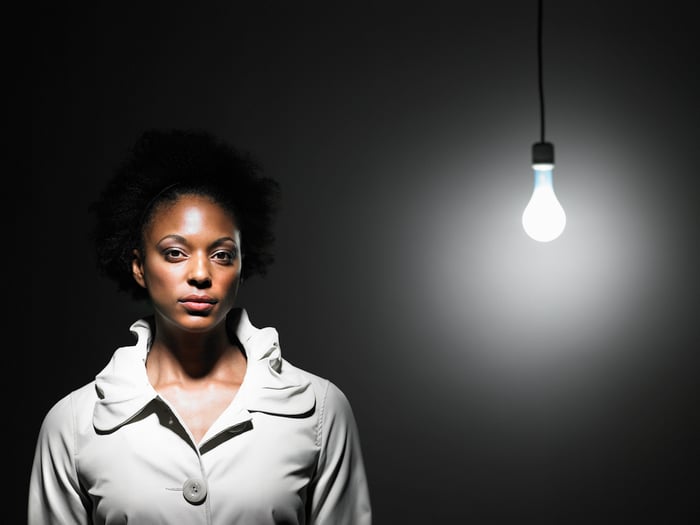 Out with the laggard

One of the biggest changes that has taken place at Emerson over the last year and half was the roughly $5 billion sale of its network power division. That group's margins lagged those of Emerson's other businesses. So, jettisoning it removed a weight that was holding down the broader company's results. This was no small move, either -- the network power division made up around 20% of the company's revenue. It was a bold decision, but one that positions the company for higher margins in the future.

That sale left Emerson with cash burning a hole in its pocket. In fact, even before the deal was closed, Emerson had announced it was looking for acquisitions. That's something that hasn't changed, and likely won't for years. The industrial giant is projecting that purchases will add up to 4 percentage points to its annual top-line growth rate through 2021. And it has the cash to make that happen. 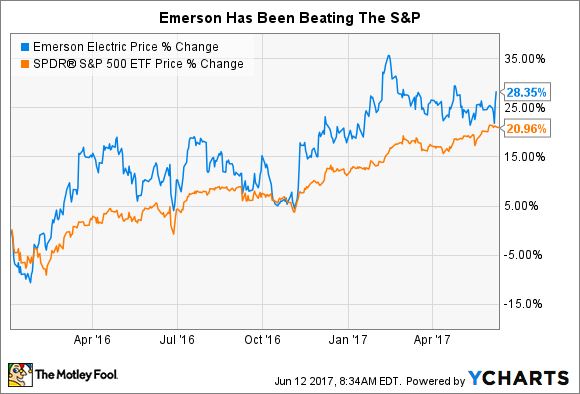 Companies can say things like that and still never have any deals materialize. But Emerson wasn't kidding. The industrial giant hadn't even completed the sale of the network power segment before it inked its first deal, agreeing to buy Pentair's valves and controls business for around $3 billion. This deal, now complete, complements Emerson's automation business by adding a globally respected brand to its offerings. More important, it proved that the company was serious about revamping its portfolio.

Then there's the business backdrop, which has been kind of rough lately. Emerson's underlying sales fell 7% in fiscal 2016 (after adjusting for discontinued operations, notably network power). As fiscal 2017 got under way, the company was projecting an underlying sales decline of as much as 3%.

However, a turnaround in the company's automation business started sooner than management had anticipated, and now Emerson is looking for underlying sales to be flat. That's not exactly a huge positive, but it looks like sales are finally starting to move in the right direction again. Over the longer term, Emerson is calling for sales gains of between 4% and 8% a year from a mixture of underlying sales growth and acquisitions. That's not bad in an industry where growth traditionally tracks closely with inflation. 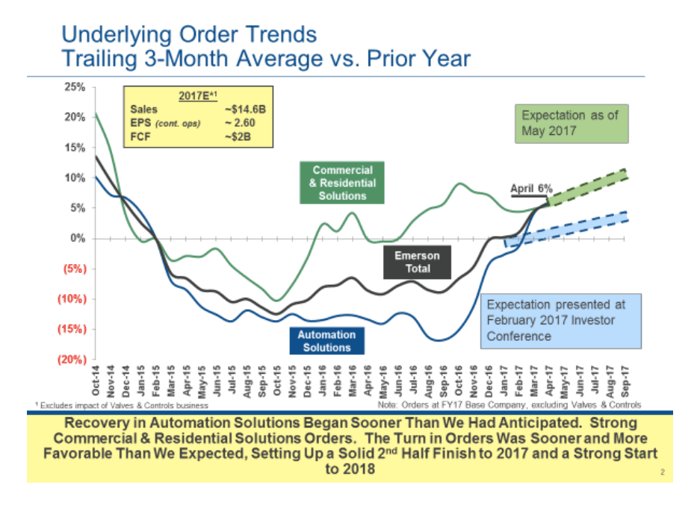 The last reason to stick around is more than six decades in the making. Emerson's roughly 3.1% dividend yield is backed by 60 years of annual dividend increases. That puts this industrial giant in rare company, with Dividend Aristocrats like 3M at 59 years and Coca-Cola at 55 years. It shows a dedication to investors that very few companies can claim. And Emerson's yield is more than a full percentage point higher than what's being offered by the S&P 500 today. So, even though the shares have had a nice run, the yield is still enticing.

Not perfect, but good

No investment is perfect, and Emerson certainly has some blemishes. For example, today the P/E ratio is on the high side relative to its historical trends -- and much higher than it was at the low point in 2016. For some investors, that might mean it's time to jump ship. But if you're a long-term investor, there are a lot of good things going on at Emerson. That list includes getting out of a lagging business, buying a large business that complements its core assets, plans to continue along the acquisition front  -- with the cash to do it -- and a dividend record and yield that are impressive on both a relative and absolute basis. In my opinion, Emerson is still worth owning.