Here's what management sees for the future of the company, and how it affects the investment proposition for the stock.

Emerson Electric Co.'s (EMR -1.31%) 3.2% dividend yield and 60-year history of increasing dividend payments makes it an income investor's favorite. However, following the divestitures of the network power segment and two industrial automation businesses, and a tough 2016 in which underlying sales fell 7%, investors might be concerned about its dividend growth prospects. Simply put, Emerson needs to get back to growth. With this in mind, here are some key takeaways from management's recent presentation.

Orders are coming back

In common with other industrial companies like Rockwell Automation (ROK 1.63%) and General Electric Company (GE 2.58%), Emerson has significant exposure to the oil and gas industry -- something that hurt all three companies in 2016. However, there is a growing consensus that energy capital spending is in recovery mode following deep cuts in the last two years. As a consequence, Rockwell raised its 2017 organic growth forecast, while GE's organic oil and gas orders grew for the first time in two years in its fourth quarter.

Meanwhile, the latest trailing-three-month order data from Emerson supports the idea that the company, and oil and gas spending, is in recovery mode. 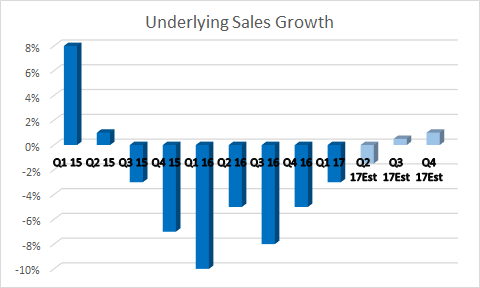 Back on the fourth-quarter earnings call, CEO David Farr referred to rising cost pressure in 2017, sparking concern that margins would come under pressure.

However, in the investor day presentation in February, Farr estimated that both gross margin and earnings before interest and tax (EBIT) margin would rise in 2017. Full-year gross margin is expected to increase to around 43.4% from 43.1% in 2016, and EBIT margin from 17.2% to 17.9%. It's a good sign in a year in which overall sales are expected to decline 3% to 1%, and also an indication that when sales eventually start to grow again, Emerson might be able to leverage revenue growth into strong earnings growth.

The effects on revenue and free cash flow (FCF) from Emerson's end-market slowdown and the divestitures can be seen below, and given the importance of dividends to income investors, it's important to look at management's projections. 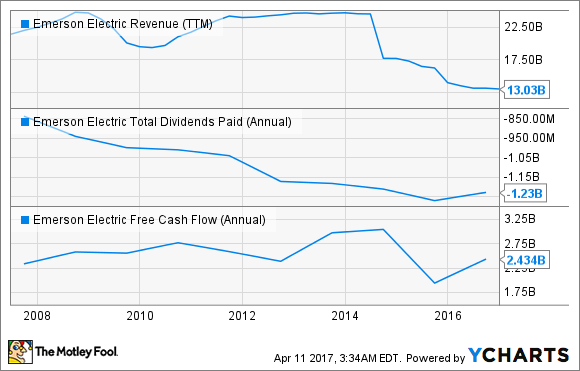 As you can see above, dividends paid to shareholders were around $1.23 billion in 2016. Based on management's projections for $2.5 billion in operating cash flow and $475 million in capital expenditures in 2017, FCF is likely to be around $2.025 billion in 2017. This would mean the 2016 dividend alone would represent slightly more than 60% of FCF -- management has previously stated an intent for a ratio of 40% to 50%. In other words, while the dividend is well covered, don't expect much dividend growth in the next five years.

...but don't expect much dividend growth

Furthermore, when a company is paying out a high amount of its FCF in dividends, it reduces the company's financial firepower to make earnings- and cash-flow-enhancing acquisitions. In a nutshell, dividend growth is likely to be very moderate for the next five years. 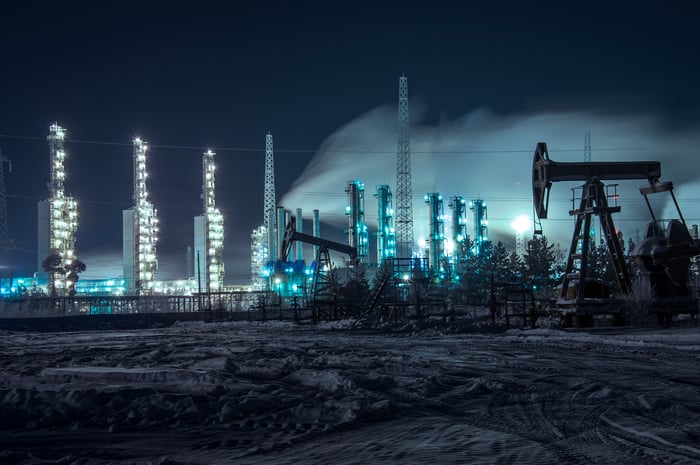 What income investors can expect from Emerson Electric

All told, if you want a steady, 3% dividend yield, the current stock price is attractive, but don't expect too much in terms of growth going forward. Moreover, while Emerson Electric's end markets are on an uptrend, much of it is contingent on oil prices stabilizing and energy capital spending increasing. If you're confident of the latter, and you like an income stream from an investment, then Emerson Electric is worth consideration, but it won't shoot the lights out.