Please ensure Javascript is enabled for purposes of website accessibility
Log In Help Join The Motley Fool
Free Article Join Over 1 Million Premium Members And Get More In-Depth Stock Guidance and Research
By Eric Volkman - Jul 3, 2017 at 10:12AM

"Despicable Me 3" was No. 1, but didn't make as much as its studio thought. "Baby Driver" surprised at No. 2, while "Transformers: Last Knight" was last in the top three.

Are we seeing the end of the Age of the Sequel? This past weekend provided some new evidence that this might be so. Despicable Me 3 was the top-grossing film, but its opening take was lower than its studio anticipated, and short of most of its predecessors.

Despicable Me 3 is actually the fourth movie in what we can call the Despicable Me Extended Universe (in addition to the three Despicables, there's the 2015 effort Minions) released by Comcast's (CMCSA 0.84%) Universal.

Matched against the opening performance of its three predecessors, 3 wasn't too hot -- its $75 million-plus domestic gross fell short of 2's nearly $84 million, and was well below Minions' almost $116 million. It did, however, eclipse the original Despicable Me's $56 million, but one beat out of three isn't impressive for the Comcast unit. Looking forwards, it'll be interesting to see whether Comcast keeps the franchise alive. 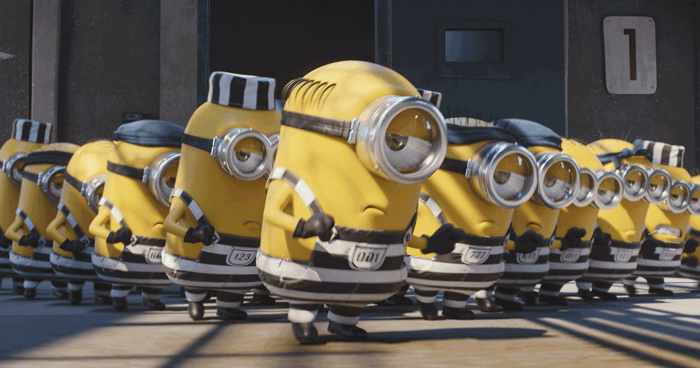 The No. 2 film at the weekend box office was another debut, the hip Baby Driver released by Sony (SONY -1.73%) and its affiliate Columbia. Packed with familiar actors and directed by Edgar Wright of Shaun of the Dead fame, Baby Driver sped past Sony's expectations, taking in an estimated $21 million over the weekend. That's nearly double the previous record for a Wright film, the $10.6 million of 2010's Scott Pilgrim vs. the World.

Sony's latest hit was sandwiched between a pair of sequels; the second of these was the weekend's No. 3 performer, the returning Transformers: The Last Knight. Like Despicable Me 3, the fifth installment in the Transformers, erm, saga has performed well at the box office, but not compared to its forbears. Released by Viacom's Paramount, the movie grossed around $17 million across the weekend.

Worth a mention is No. 4, Wonder Woman from Time Warner's (TWX) Warner Bros. The superhero epic took in nearly $16 million during the period, pushing its cumulative domestic gross up to a mighty $346 million-plus.

Combined with foreign ticket sales that were slightly higher, the film has now grossed in excess of $708 million worldwide; in the U.S., it is the third-most popular movie so far in 2017, and the Time Warner unit's best performer.

This coming weekend we'll see yet another superhero franchise entry -- Spider-Man: Homecoming from Sony/Columbia -- hit the screen. That'll likely take the No. 1 spot, or at least perform well enough to land in the top three. Next week yet another franchise installment will debut, War For the Planet of the Apes, released by 21st Century Fox's Twentieth Century Fox.