The galvanizing and electrical products-and-services company delivered a disappointing set of earnings, but management reassured investors that a turnaround is on the way.

The industrial sector, in general, has been enjoying a bounce in oil and gas capital spending and a general improvement in industry conditions, and AZZ Inc. (AZZ 1.55%) investors were hoping the company would have a strong year. However, results from the fourth quarter of 2017 were disappointing, and the recent first-quarter 2018 earnings report also contained a mix of issues, mainly affecting the company's energy segment. On the other hand, management retained full-year guidance and signaled better conditions ahead for its core galvanizing (now renamed "metal coatings") segment. There's a lot going on, so let's take a closer look.

The best way to look at AZZ's results is by separating its two segments. Metal coating is essentially the galvanizing and powder coating of steel, while the energy segment contains an assortment of businesses, including electrical equipment, lighting solutions, welding services, electrical switchgear, and nuclear equipment. 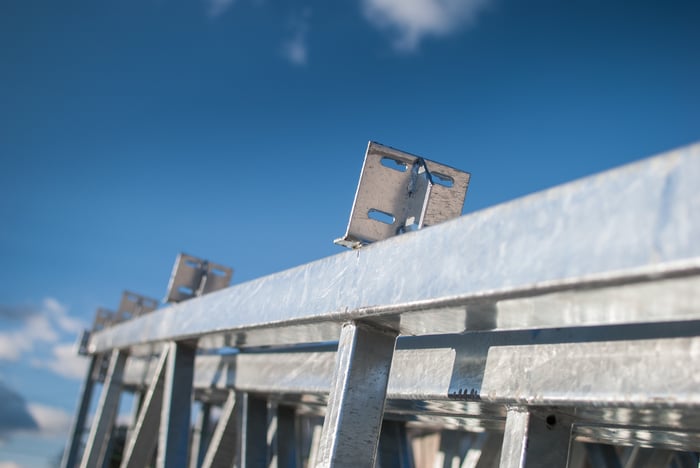 As you can see below, both segments had significant revenue and profit declines in the quarter, but the difference is that the metal-coatings segment "performed as expected," according to CEO Tom Ferguson. He continues to believe conditions will improve for the segment in the second half of AZZ's fiscal year. It's a viewpoint he stated on the first-quarter earnings call. However, conditions are more problematic with the energy segment.

The energy segment got hit by a combination of issues identified by Ferguson in the earnings presentation:

Moreover, the positives in the quarter gave scant cause for much optimism. For example, management claimed on the conference call that the lighting and tubular businesses exposed to the oil industry had stabilized, but "have a small impact on our energy results." Meanwhile, the NLI business (nuclear equipment) was a "bright spot" in the quarter, but NLI's year somewhat depends "on what happens with their Westinghouse business."

In short, it was a difficult quarter, but management promised operational improvements in order to counter weak end demand.

Despite the revenue decline in the metal-coatings segment, Ferguson continues to believe a recovery is on the way. He discussed the segment's outlook on the earnings call: "This is the first time I've seen our galvanizing/Metal Coatings folks optimistic" in a year. When pushed further on the matter during the earnings call, Senior VP Tim Pendley outlined the improvements management was seeing in infrastructure, transmission, and distribution, and a "little solar pick up." Ferguson also said that nonresidential construction is "trending up."

Although the general improvement in industrial activity hasn't shown up yet in AZZ's metal-coatings segment numbers just yet, management appears to believe it's only a matter of time.

Guidance and looking ahead

Despite the weaker-than-expected performance in the energy segment, management maintained expectations for full-year fiscal 2018 sales in the range of $880 million to $950 million and earnings per share in the range of $2.60 to $3.10 per diluted share. To be fair, it was a pretty wide range to begin with, so there probably isn't too much to be read from this.

Looking ahead, investors will be hoping the metal-coating segment receives its expected boost from stronger industrial activity, while management needs to generate operational improvements in the energy segment in order to offset difficult end markets.