The galvanizing and electrical products company failed to meet its own expectations and lowered guidance.

It's never a good thing when a company misses its current full-year guidance and then promptly reduces its guidance for the coming fiscal year, but that's the reality of AZZ Inc.'s (AZZ -3.16%) fourth-quarter earnings report. A combination of weak ongoing end-market conditions and the bankruptcy of Westinghouse hit AZZ hard. In short, it was another difficult quarter for the company. Let's take a closer look at what went wrong

Starting with the headline numbers for the full year:

That previous guidance was last given on the second-quarter earnings release in October. Fast-forward to the disappointing set of third-quarter earnings released in January, and CEO Tom Ferguson said, "We are working toward issuing guidance for fiscal year 2018 within a few weeks. We will update our fiscal year 2017 full-year outlook at that time."

Management promptly gave its full-year fiscal 2018 guidance in February, but made no mention of 2017 guidance on the release. 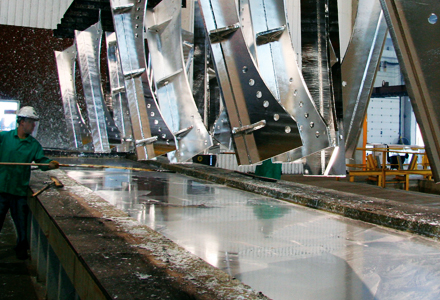 In addition to missing 2017 guidance, management reduced the 2018 guidance it gave just a couple of months ago. Here is the updated guidance compared to what was given in February:

Clearly, something's going wrong, but what?

Here's a breakout of segment sales, income, and margin in the quarter.

On the earnings call, Ferguson referred to generally weak end-market conditions for both segments thanks to "continued contraction in our markets due to the economic fallout of the low oil patch activity, lower solar opportunities, and a continued low level of major refinery turnarounds."

But the pain doesn't stop there. There were significant declines in energy revenue, income, and margin. A major cause of this was the bankruptcy of Westinghouse -- a company Ferguson described as being a "fair-sized" customer of the energy segment.

Turning to the galvanizing segment, end-market demand was weak but there were also cost pressures from the rising price of zinc. Essentially, AZZ tried to pass the cost increase on, but as Senior VP Tim Pendley put it on the earnings call, "Competition has been reluctant to move in that direction, which has challenged some of our volume." The end result was a significant loss of revenue and operating income in the galvanizing segment, though operating margin was held to a small decline.

On a more positive note, Pendley said of galvanizing: "We finally feel like we have hit the bottom there and then [are] bouncing back up." Moreover, management's overall guidance still implies revenue growth of 2.5% to 10.6%. There is not a lot AZZ's management can do about lost revenue in the energy segment due to the Westinghouse bankruptcy, or ongoing weakness in oil and gas, so most hopes will likely rest on an improvement in galvanizing in the back half of the year.

Why Shares in AZZ Slumped This Week