At investor conference appearances in May and June, Paycom Software (NYSE:PAYC) CEO Chad Richison spoke about why the company's all-in-one approach to human capital management (HCM) and payroll software continues to be so successful. While providing color on the pace of new office openings, Richison said he hopes the company can eventually grow to over $1 billion in annual sales revenue.

Competing with industry giants, and winning

Paycom targets what it calls the mid-market (companies with between 50 and 2,000 employees). The company's core offering is an HCM solution that consolidates payroll and HR functions in a single cloud-based system, eliminating the inefficiencies of dealing with multiple vendors or doing tasks in-house. Paycom's software is also designed for mobile access so employees can complete these tasks from virtually anywhere. 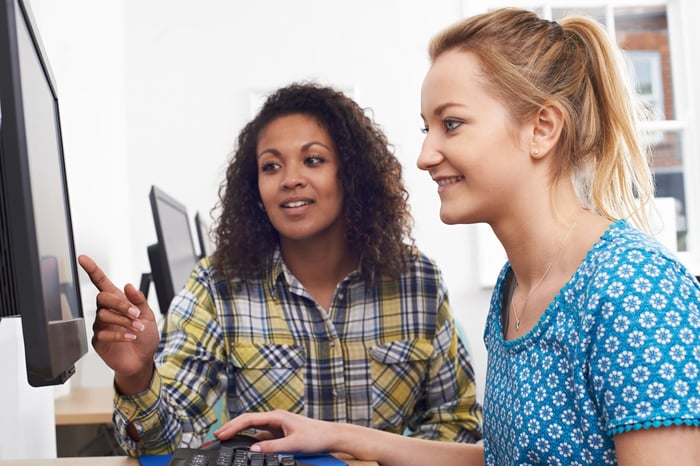 Commenting on the competitive environment, Richison noted that the big, established providers like ADP aren't asleep at the wheel -- they're also trying to move customers to a cloud-based offering. In fact, Richison said every customer that has come to Paycom from ADP was already on a cloud-based platform. This implies that when it comes to switching from one of Paycom's larger competitors, moving to the cloud isn't much of a motivator. Interestingly, price isn't one of the big factors either, as Paycom says it's not the lowest-cost provider and is in-line with ADP. Richison says that Paycom's sales pitch is more ROI-driven, as its software generally replaces two or three other vendor solutions. Richison emphasized that solving customers' integration headaches -- while saving them time and money through increased efficiency -- continues to be the biggest differentiator for Paycom.

When Paycom opens a new sales office, it relocates a successful sales manager from an existing location and allows that person to build the new office's sales team from scratch, a process that takes up to 2 years. Paycom then promotes another employee from within to backfill the original position.

Paycom plans to tweak this process a bit going forward. For starters, the company says it will spend more time grooming and developing its pool of backfill candidates. Also, recognizing that this strategy tends to be quite disruptive to its existing offices, Paycom is going to avoid packing all its new office openings into a single quarter as it did in 2016, opening six offices in a 10-day span. Instead, the company's 2017 openings will be spaced out more evenly throughout the year.

A big, round $1 billion goal

Richison noted that Paycom needs to continue to build its sales organization so it can overcome its "churn" -- i.e. the revenue that goes away due to a customer going out of business, being acquired, or switching to another provider (currently around 9% annually).

Previously, when talking about the company's sales capacity, Richison has said that he thinks Paycom can grow to 120 sales offices, with each supporting roughly $6.15 million in annual sales. That scenario would generate total annual sales of around $738 million.

But apparently, Paycom now has its sights set even higher, with Richison saying the company is working toward $1 billion in annual sales. Keep in mind this would be in addition to the recurring revenue Paycom receives from existing clients. To give you a sense of the kind of growth Richison is describing, Paycom's total 2016 revenue was just $329 million, and nearly all of that ($323 million) is recurring revenue. 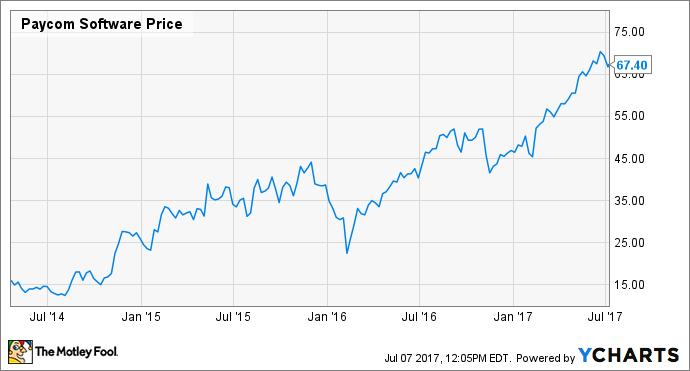 Though the payroll and HCM industry is becoming increasingly competitive, Paycom's single-database solution continues to resonate strongly with the mid-market. And despite the company's incredible growth streak of the past few years, Paycom's future potential still appears to be enormous.