After several years of impressive results, this growth story looks far from over.

Paycom Software (PAYC), the provider of workforce management and payroll software, reported its fourth-quarter and full-year 2016 earnings in February. Investors found plenty to celebrate, including yearly top-line gains of 47% and net-income growth of 109%, sending Paycom's stock to new all-time highs. With 2016 now in the books, let's take a look at just how remarkable the company's performance has been over the last five years. 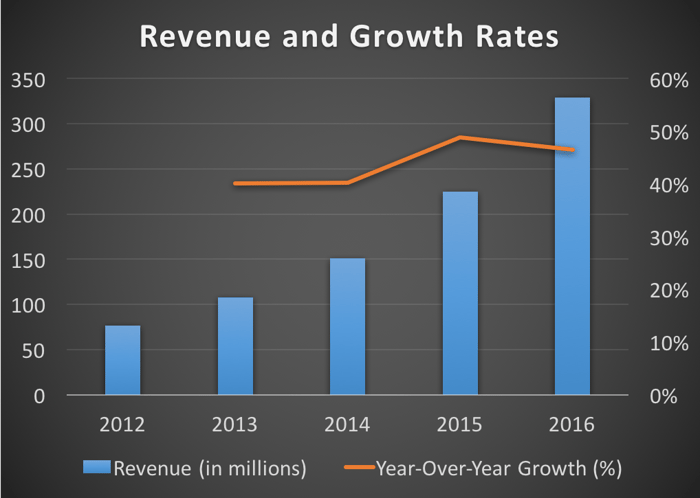 Paycom's revenue growth is a thing of beauty, rising from $76.8 million in 2012 to $329.14 million in 2016. For the past four fiscal years, yearly revenue growth has been above 40%. While rates like that may not be sustainable for a whole lot longer, the company has guided for 2017 revenue of $422 million to $424 million, the midpoint of which represents 29% growth. And management has stated that they continue to target yearly top-line growth of 30% plus.

Retention rates -- the most boring chart in the world 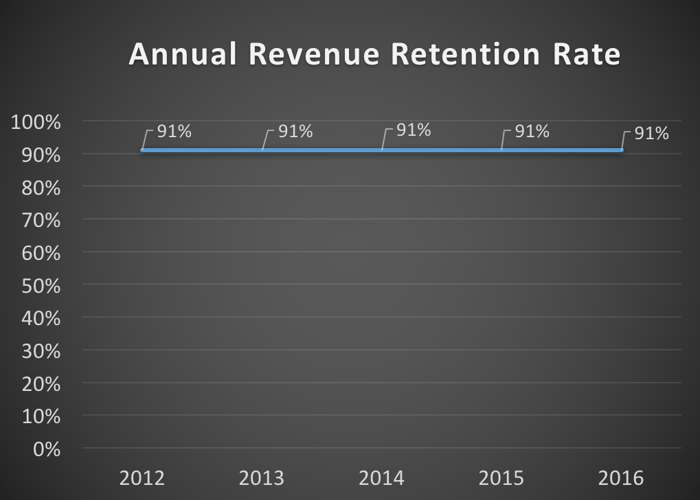 While the chart above may not be very exciting to look at, that's just how Paycom investors should want it. The company's revenue retention rate -- which is the percentage of revenue retained from existing clients -- is a good indicator of overall client satisfaction and a reliable predictor of future revenue. Paycom's retention rate has held steady at 91% for five consecutive years, and the company claims that it continues to lead the industry on this important measure. 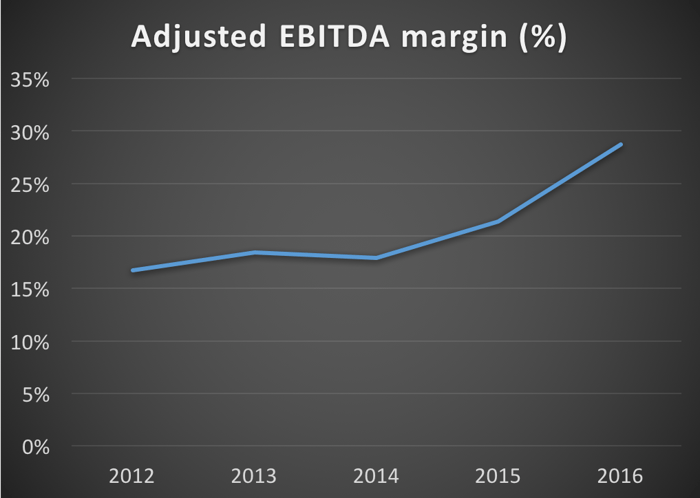 Adjusted EBITDA (earnings before interest, taxes, depreciation, and amortization) margin measures a company's operating profitability as a percentage of its revenue. As you can see, Paycom's adjusted EBITDA margin has risen fairly dramatically from 16.7% in 2012 to just under 29% in 2016. And there is likely even more room for improvement, as management has stated they are targeting long-term adjusted EBITDA margins of 30% to 33%. That said, the company is prioritizing top-line growth in the near term, which will boost expenses for sales, marketing and R&D in 2017. As a result of those strategic investments, management has issued guidance for adjusted EBITDA margin of 27% in 2017. 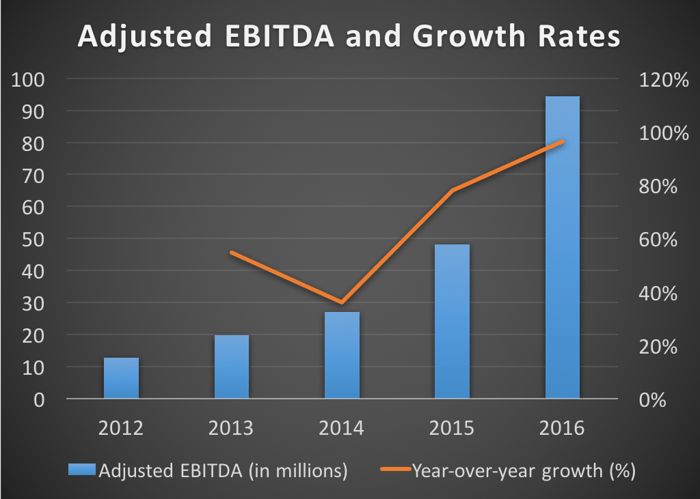 In terms of the bottom line, Paycom's net income has grown at triple-digit annual growth rates for each of the past three years. However, since the company just turned profitable in 2014, the growth rate trend line doesn't make for a good chart. Instead, check out Paycom's adjusted EBITDA. You can see that this measure of "top-line" earnings grew from $12.83 million in 2012 to $94.46 million in 2016, with annual growth rates that exceeded 50% in three of the past four years. However, in line with my previous comments about 2017 being a kind of investment year, the company also issued adjusted EBITDA guidance of $113 million to $115 million, reflecting lower annual growth of 21% at the midpoint.

Paycom's business is generating solid results on the top line, the bottom line, and everywhere in between. And it hasn't been just one or two great quarters -- the company has been exceeding expectations now for several years running. Although 2017 may bring slightly lower margins and earnings growth, the company's continued strong top-line expansion and steady retention rates make me think Paycom's future will look a lot like its past.