Share of copper and gold miner Freeport-McMoRan Inc. (NYSE:FCX) advanced an impressive 21% in July. The gain, however, wasn't evenly spread across the month. In fact, it was only up around 7.5% by July 24th. After reporting earnings the next day, however, the shares took off like a rocket.

Clearly, investors were pleased with the company's second quarter earnings announcement. On the top line, revenues advanced 13% year over year in the quarter. On the bottom line, the company swung from a loss from continuing operations of $0.23 a share in the second quarter of 2016 to a profit of $0.18 a share this year. 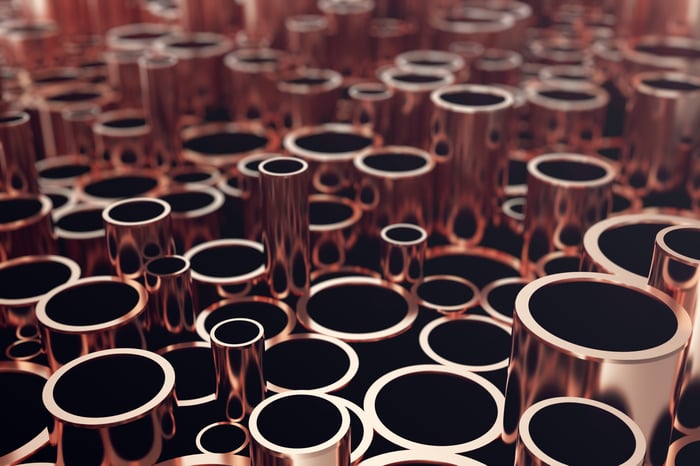 Although copper production was lower quarter over quarter by 4.5%, realized prices were up 20%. The company was also able to reduce its copper costs by nearly 10%. So, overall, the news in copper was positive. On the gold side, realized prices were lower but ounces sold increased by roughly 175%. Even the smaller molybdenum business reported good results with higher prices and volumes sold. So, on the whole, the earnings news was positive.

The balance sheet update was also nice reading. Long-term Debt has been reduced by 10% so far this year, chiming in at around $13 billion at the end of June. That figure was over $18.5 billion at the midpoint of 2016 and nearly $20 billion at the start of last year. This is an important improvement for Freeport, which took on a huge debt load to complete its ill-timed move into oil and gas drilling (a business it has since sold).

The second quarter earnings also contained an update on the company's troubled relationship with Indonesia. Production at the massive Grasberg mine, the asset that is at the core of the conflict, doesn't appear to have been materially disrupted. And while there was no new news about the ongoing discussions toward a resolution of the conflict, there was no bad news to report, either. Overall that means the update on the company's Indonesian operation was a net positive.

Freeport has made a huge amount of progress as it works its way back from its poorly timed investment in the energy sector. Generally improving commodity markets have clearly helped on that front, but that shouldn't diminish the hard work by management to strengthen the balance sheet. And the Grasberg mine remains a wild card, but appears to be a neutral issue for now. But even with the progress, Freeport is still most appropriate for more aggressive investors until there's final solution in Indonesia.