Exchange-traded funds are the future, and everyone wants in on the party. The only problem is the venue is sold out, and tickets are selling at billion-dollar prices.

Invesco (NYSE:IVZ) is nearing a deal that would value Guggenheim's ETF business at more than $1 billion, according to The Wall Street Journal. That could be a boon for WisdomTree Investments (NASDAQ:WETF) shareholders, who have been on a wild roller-coaster ride since the company listed on the Nasdaq for the second time in 2011.

Guggenheim's ETF business, should it sell, could mean WisdomTree is worthy of an even higher valuation than the market gives it today.

Guggenheim has approximately $35.4 billion of assets under management (AUM) spread across 72 different exchange-traded funds. These funds generate approximately $106 million in fees on an annual basis, based on my analysis of its funds' AUM and fee agreements.

With a reported deal price ($1 billion), we can calculate rough multiples based on Guggenheim's assets under management and estimated annual management fees from its ETF business. These figures appear in the table below.

Of course, we don't know the exact terms of the Invesco deal, how the deal will be structured (some of the reported transaction value could be based on hitting certain objectives for AUM or fees, for example), but it provides a basis for back-of-the-envelope estimations about the value of WisdomTree's U.S.-based ETF business.

Applying the implied multiples of Invesco's rumored deal for Guggenheim's business to WisdomTree's U.S. ETFs yields a valuation ranging from $1.2 billion to $2 billion.

It's hardly scientific, to be sure. The difference between $1.2 billion and $2 billion is vast. But with about $125 million of additional value stemming from WisdomTree's net current asset value as of June 30, you get a valuation for WisdomTree roughly equal to, or well in excess of, its current market value of approximately $1.3 billion. At the high end, this pins WisdomTree's value as high as $15 per share.

Note that this assigns no value to WisdomTree's fledgling international ETF business. With less than $1.6 billion of AUM, it's nothing more than a potential call option for an acquirer, and likely adds or subtracts very little from WisdomTree's value to a potential acquirer as it sits today. 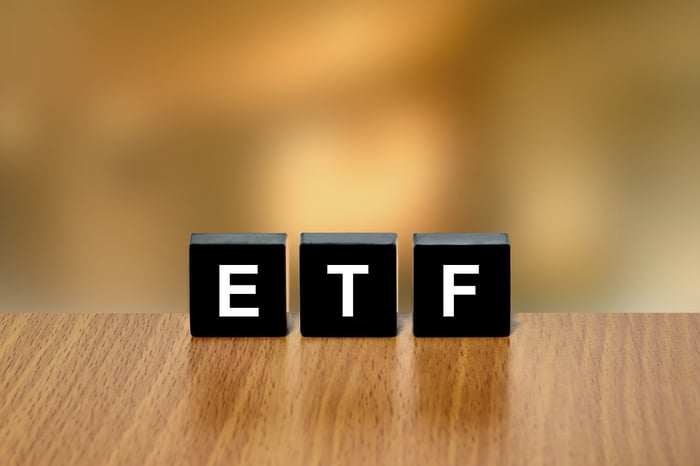 Why WisdomTree is worth a higher multiple than Guggenheim

Even more important than the amount of AUM or management fees is their durability. Managers of growing funds are worth more than managers of shrinking funds. Similarly, some managers have more durable AUM and fee-generation ability, because competitors find it more difficult to duplicate their strategies, or because their funds are less prone to price competition.

The biggest pieces of the WisdomTree portfolio are the Europe Hedged Equity Fund (NYSEMKT: HEDJ) and Japan Hedged Equity Fund (NYSEMKT: DXJ), which have $8.8 billion and $8 billion of AUM, respectively. On one hand, WisdomTree's currency-hedged ETFs are fit only for expressing a short-term view; they're unlikely to be the building blocks of the average Joe's retirement portfolio, making for large swings in AUM from month to month or even week to week. On the other hand, WisdomTree can charge higher fees for these niche strategies, and competitors find them more difficult to duplicate.

Beyond its behemoths, WisdomTree has several smaller dividend-based strategies that have attracted yield-seeking equity investors. With only one exception, these funds have collected less than $2 billion in AUM each, though they are growing, and putting up top-tier performance in their categories, despite higher fee loads.

To be sure, Guggenheim's largest ETFs aren't exactly trophies themselves. The Guggenheim S&P 500 Equal Weight ETF is its largest fund, accounting for approximately 38% of assets under management and 31% of fees generated each year.

Luckily, it faces no competitive threats, at least in ETF packaging. While it's the only S&P 500 ETF that weights all holdings equally, there are many mutual funds, including some from Invesco, that offer the exact same strategy. In a sign of how competitive the market for plain-vanilla index funds has become, Guggenheim agreed to slash its annual management fee down in half in June, from 0.4% of assets to 0.2% of assets. 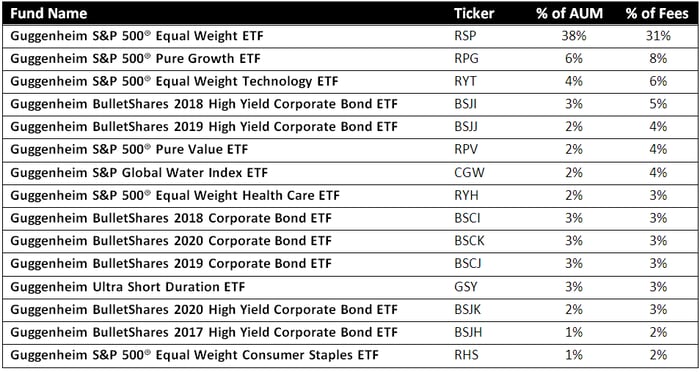 Further down its lineup, Guggenheim's largest fee-generators and perpetual funds are mostly based on indexes created and controlled by S&P Global (NYSE: SPGI). (Its proprietary BulletShares ETFs are based on indexes owned by an affiliate of Guggenheim, but these ETFs are designed to liquidate when the calendar reaches the respective maturity date.) In contrast, WisdomTree uses its own proprietary indexes for its ETFs, which makes them more difficult to knock off, at least in theory.

Cash-rich but growth-starved, analysts have speculated for years that Franklin Resources could see WisdomTree Investments as an attractive way to buy into ETF management. As mutual fund managers see their legacy businesses lose share to ETFs, and existing acquisition targets dwindle in number, WisdomTree's acquisition value only blossoms.